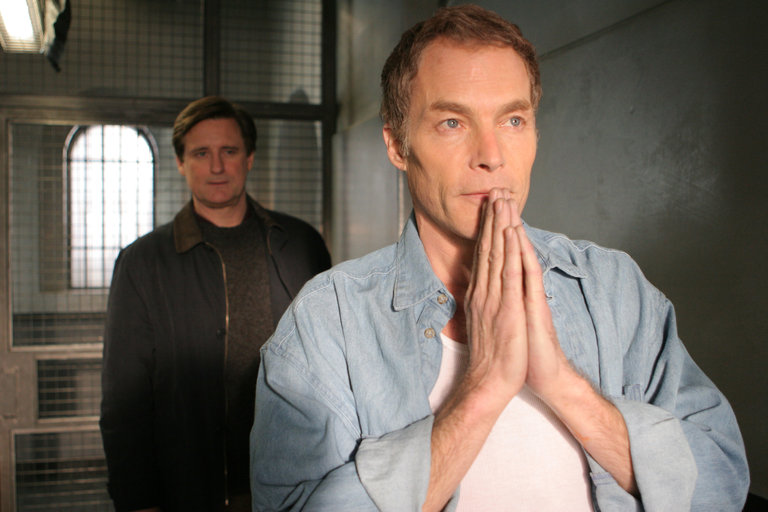 Michael Massee, foreground, in 2005, with Bill Pullman in “Revelations,” in which he played a murderous Satanist.

Michael Massee, a character actor who played villains on television and film and who fired the gun on the set of “The Crow” that accidentally killed Brandon Lee in 1993, died on Oct. 20 in Los Angeles. He was 64.

The cause was stomach cancer, said his wife, Ellen.

Mr. Massee had appeared in two films, “My Father Is Coming” (1991) and “Home of the Angels” (1994), when he landed a role as a drug-addled gangster named Funboy in “The Crow.” The film starred Mr. Lee, the 28-year-old son of the martial-arts star Bruce Lee, as a rock musician who returns from the dead to wreak havoc on the gang members who murdered him and his fiancée.

On the night of March 30, 1993, Mr. Massee was filming a scene in which Mr. Lee’s character dies. Mr. Lee was supposed to walk into an apartment and encounter four gang members attacking his lover, and Mr. Massee, as one of the thugs, was supposed to shoot him at close range with a revolver loaded with blanks.

But when Mr. Massee pulled the trigger, the gunpowder in the blank cartridge ignited and fired a fragment of a bullet — probably part of a dummy shell that had been left in the gun’s barrel from an earlier scene — into Mr. Lee’s midsection. Mr. Lee collapsed and after hours of surgery, died in a hospital.

The shooting was ruled an accident. Devastated, Mr. Massee took a long sabbatical.

“I don’t think you ever get over something like that,” he told the entertainment news show “Extra” in 2005.

In time, Mr. Massee returned to acting. He played a terrorist on the first season of the hit Fox action series “24” and a Satanist murderer on the NBC mini-series “Revelations” in 2005.

He also appeared in several high-profile films released in 1997: David Lynch’s “Lost Highway,” Steven Spielberg’s “Amistad” and Wim Wenders’s “The End of Violence.” More recently he played a mysterious gentleman in “The Amazing Spider-Man” (2012) and its sequel (2014).

Michael Groo Massee was born in Kansas City, Mo., on Sept. 1, 1952, to Holly and Jack Groo Massee. The family moved to Paris, where Mr. Massee grew up.

After high school, he moved to New York City, where he received a bachelor’s degree from Hunter College and studied acting at the Neighborhood Playhouse School of the Theater.

Mr. Massee appeared in David Fincher’s gory serial-killer film “Seven” (1995) and in multiple episodes of the HBO drama “Carnivàle” as well as the TNT police procedural “Rizzoli & Isles.” He was also seen on “Criminal Minds,” “Alias,” “The Blacklist” and other shows.

In 1997, he married Ellen Sussdorf, with whom he lived in Hollywood. He is also survived by his mother; two sisters, Kim and Robin Massee; a brother, Happy; a son, Jack; and a daughter, Lily Massee.

Correction: October 28, 2016
Because of an editing error, a headline with an earlier version of this obituary misstated Mr. Massee’s age. As the obituary said correctly, he was 64, not 63.