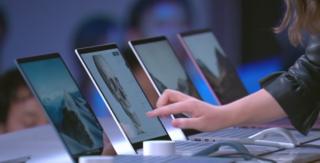 Microsoft has unveiled a new Surface laptop to compete with the Macbook Air.

The tech giant also revealed a new edition of its Windows 10 operating system aimed at schools and designed to run on low-cost computers.

Experts said the move was intended to help Microsoft compete with Google in the schools market.

He also said it would run the new Windows 10S operating system and, despite the price, had been designed with students who were about to leave school in mind.

Carolina Milanesi, an analyst at Creative Strategies, said: “Apple’s Macbook Air is also popular with students and it hasn’t produced a new model for a while.

“So this is all about Microsoft trying to steal a march on its old rival.”

Windows 10S promises stronger virus protection and better battery life, and will be available on third party PCs with a starting price of $189.

Microsoft and Apple have long dominated the school computing market, but they have struggled with the recent rise of Chromebooks – low-cost PCs running Google’s Chrome operating system (OS).

According to consulting firm Futuresource, 58% of devices sold to US schools in 2016 were Chromebooks, while 22% ran Windows operating systems and 19% ran Apple ones.

Microsoft said devices using Windows 10S would only run apps provided through the Windows Store, which would help maintain their security and speed.

It also said the OS would be easier for teachers to set up and manage.

Ms Milanesi said: “I think it’s a compelling proposition for schools – but the first question is how easy will it be for schools who have already invested in Chromebooks to make the transition?

She added: “Third party hardware suppliers will be asking what is in this for them, especially if they are making hardware for the Chrome operating system too.

“Microsoft has already convinced some suppliers such as Acer to come on board, but it may have to offer incentives to keep them engaged.”