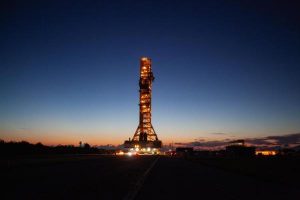 NASA is in final preparation stages for its Artemis 1 moon mission, which will be the first in its Artemis series of missions which intend to return an American man to the Moon, and bring an American woman to the surface of Earth’s natural satellite for the first time. The 335-ft tall mobile launch tower that will send Artemis 1’s Orion capsule to lunar orbit atop a Space Launch System rocket is now on the pad for its last round fo testing before the real thing.

NASA’s Artemis 1 mission will fly the Orion crew capsule to space, where it’ll spend three weeks, including a six-day lunar orbit. The capsule will be fully equipped with all life support systems it would need to actually support a crew onboard, but there won’t be anyone actually on it for this one since the intent is to prove the safety and effective operation of the system prior to Artemis 2, an intended crewed launch to follow Artemis 1 a few years down the road.

Artemis 1 will take off from Launch Pad 39A at Kennedy Space Center in Florida, with an intended launch timeframe of June 2020. The enter launch system has already undergone a lot of testing, both on-site at the towering Vehicle Assembly Building (VAB) where rocket parts are put together at Kennedy, and prior to that as each component has been built. But this final crucial round of testing will be the last on the pad before the rocket actually launches.

Tue ultimate goal of the current stage of the Artemis program is to land astronauts on the lunar surface, which will happen with the third Artemis mission in 2023 if all goes to current plans. Artemis missions thereafter will aim to establish a more permanent presence for humans in space, including ultimately the establishment of a lunar outpost.