Coke — which, like the C.D.C., is based in Atlanta — has also had two employees on Georgia Shape’s advisory board, in various years. One was Rhona S. Applebaum, Coke’s chief science and health officer. She left the company in 2016 after The Times reported that she had helped orchestrate a strategy of funding scientists who encouraged the public to focus on exercise and worry less about how calories contribute to obesity.

Ben Sheidler, a Coke spokesman, said that someone from the Georgia Department of Public Health had solicited the grant for Power Up for 30 from Coke’s foundation, but that he did not know who it was.

The program emphasized Coke’s longtime contention that exercise is the key to weight loss. A search of the program’s website turned up no mention of the role of sugary drinks and sodas in weight gain. The company has spent millions on studies that support exercise over reducing soda consumption, and that, critics say, deflect attention from the role sugar-sweetened beverages have played in the soaring rate of obesity and the spread of Type 2 diabetes among children.

But numerous other studies, including research from the C.D.C., have come to the conclusion that sugar-laden drinks are a major factor contributing to obesity. The C.D.C.’s website notes: “Frequently drinking sugar-sweetened beverages is associated with weight gain/obesity, Type 2 diabetes, heart disease, kidney diseases, nonalcoholic liver disease, tooth decay and cavities, and gout, a type of arthritis.”

In a local television interview in May 2013, announcing a $3.8 million pledge from Coke, which would also be used to underwrite other exercise-related health programs, Dr. Fitzgerald said Power Up for 30 would add exercise before, during and after school. Noting that Georgia had moved up slightly from its position as having the second-most out-of-shape children in the nation, Dr. Fitzgerald said, “Thirty minutes of exercise will go a long way toward better health.”

Dr. Fitzgerald also said on the television show that Georgia Shape would push children to eat five servings of fruits and vegetables every day.

“We’re going to concentrate on what you should eat,” she said, making no recommendation for what children should not eat. But the major focus was on increasing exercise, long a tenet of Coke’s public relations efforts. In fact, an essay on the topic by Dr. Fitzgerald is posted on Coke’s website. The title: “Solving Childhood Obesity Requires Movement.”

Dr. Fitzgerald, 71, is an obstetrician-gynecologist and a Republican who has run for Congress twice, unsuccessfully. She has close ties to her fellow Georgia Republicans Tom Price, the secretary of health and human services, and Newt Gingrich, the former speaker of the House and an informal adviser to President Trump. She has won widespread praise in Georgia for her work to reduce infant mortality, encourage language development among babies, and nudge her state up in terms of student fitness.

A series of emails, most from 2013, obtained under the Freedom of Information Act by U.S. Right to Know, illustrated a friendly relationship between Dr. Fitzgerald and Dr. Applebaum of Coke. When Dr. Applebaum was named president of the International Life Sciences Institute, the food industry’s premier research center, Dr. Fitzgerald wrote back, “Yea team.”

In a statement responding to questions, Dr. Fitzgerald defended the program and the relationship.

“We worked hard to ensure our program was robust and included all evidence-based strategies for reducing obesity,” she said in the written statement. “I think everyone can agree government can’t and should not do everything alone.” 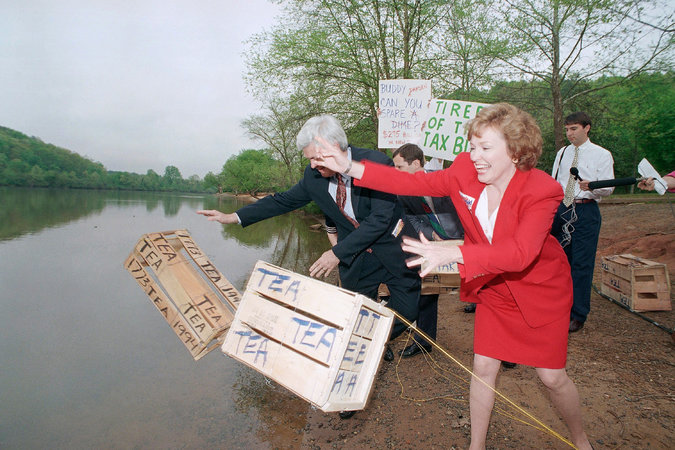 Dr. Brenda Fitzgerald and the former speaker of the House, Newt Gingrich, at a 1994 protest in Georgia against higher taxes and government spending. Dr. Fitzgerald was recently named the head of the C.D.C.

“One of the realities of the budget-tightening environment we are all in is that there is not enough money to go around for all the programs we’d like to support,” he said. “As long as there are no strings attached, it’s helpful for cash-strapped agencies to look for new sources of funding.”

But the growth of public-private partnerships, as they have come to be called, in the health field has raised ethics alarms among those who believe many corporate gifts are designed to help donors as much as recipients, by enhancing their reputations or promoting their legislative agendas. In 2011, for example, the C.D.C. Foundation was harshly criticized for accepting $60,000 from a company that did research for the pesticide industry to underwrite a project designed to prove that two agricultural chemicals were safe.

“Industry funding of obesity initiatives can undermine the mission and integrity of public health agencies,” said Jonathan H. Marks, director of the bioethics program at Penn State University and an expert in food industry philanthropy. “It can also burnish the reputation of corporate sponsors, and increase brand loyalty for the very products that are contributing to the problems the agencies are trying to solve.”

Dr. Evelyn Johnson, who serves on Georgia Shape’s advisory board, said Coke had no influence over the program. She praised Dr. Fitzgerald for her efficiency and her impact on child health in Georgia.

“With the Shape program, she organized that like she was having a military operation,” said Dr. Johnson, a past president of the Georgia chapter of the American Academy of Pediatrics. ”We do talk to kids about good nutrition.’’

An average person would have to run about three miles to offset the calories in a single 20-ounce serving of soda, depending on weight and speed, said Marion Nestle, a nutrition professor at New York University and the author of “Soda Politics: Taking On Big Soda (and Winning).”

“I’m greatly in favor of physical activity,” Dr. Nestle said. “It’s really important for health. But it doesn’t do much about weight.”

Coke has had a difficult relationship with the C.D.C. The company donated more than $1.1 million to the agency from 2010 to 2012 via the C.D.C. Foundation, a separate nonprofit entity created by Congress in 1995 to augment the agency’s budget for programs at home and abroad. The money was earmarked for several projects, some of which, like the Georgia program, were aimed at promoting exercise as a good solution to the nation’s rise in obesity.

“Coke has a very strong presence in Atlanta and has been a good corporate citizen for many years,” said Dr. Thomas R. Frieden, who resigned as director of the C.D.C. at the end of the Obama administration, after eight years. But soon after Dr. Frieden took on the job, he started winding down Coke-funded programs.

“I don’t think it’s justifiable to have Coca-Cola run an obesity campaign that had an exclusive focus on physical activity,” Dr. Frieden said. “I basically canceled it and didn’t renew it or have more grant agreements with them.”

In June 2016, during Dr. Frieden’s tenure at the C.D.C., a top official, Barbara Bowman, director of the division for heart disease and stroke prevention, resigned after U.S. Right to Know revealed emails in which she appeared to advise Alex Malaspina, a Coke official, on dealing with the World Health Organization. Ursula Bauer, a C.D.C. official, wrote a memo to the staff saying that the two were old family friends, and noting that employees should be careful what they write in emails that may find their way to public view.

Mr. Sheidler, of Coke, said the company was “not looking for any special treatment.” He added, “Our preference is to work together on things, rather than fight over restrictions or taxes.”

But Dr. Frieden said that after he ended the Coke-funded C.D.C. health initiative, he approached the soft drink company with other programs in need of funds. He met with Dr. Applebaum and Muhtar Kent, the chief executive of Coke, but was unable to persuade the company to donate, other than about $20,000 that he recalls was linked to fighting the Ebola virus.

They talked about transportation safety and water programs, Dr. Frieden said, but “nothing ever came out of those ideas.”

Dr. Fitzgerald, asked if she’d accept donations again from Coke, replied in an email that it was possible, contingent on an assessment of potential conflicts of interest.

“I will continue the review process in place at C.D.C.,” Dr. Fitzgerald wrote, “and any offers of support would be considered through this process before moving forward.”

An earlier version of this article misstated the amount of money Coca-Cola donated to the C.D.C. Foundation between 2010 and 2012. It was $1.1 million, not $1.4 million.