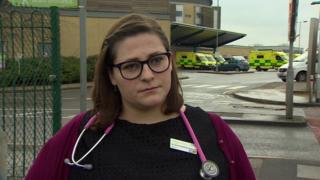 The body set up to advise hospitals on staff safety is to end that work at the end of March, the BBC has discovered.

This is despite figures showing almost 200 assaults on doctors, nurses and other NHS staff in England every day.

One A&E doctor said “most NHS staff” could say they had been attacked or felt unsafe at work.

NHS Protect said it could not comment before a staff consultation ended but the government said it believed a new approach was needed to protect staff.

The body was tasked with overseeing the measures that trusts were taking to stop physical attacks on doctors and nurses.

It has co-ordinated safety standards and held trusts to account since 2003.

Dr Jess Brittain-George, who works in accident and emergency, said: “Most NHS staff can say they’ve been attacked or felt unsafe at work, especially those of us on the front line.

“Everyone is on alert and looking out for the patient who is going to kick off.

“When I joined as a student in 2008 it was never mentioned. I did an A&E placement and no-one talked about it.

“Now it’s a running joke in the staffroom – ‘What’s happened to you today? I’ve been hit again’, or something like that.”

Dr Brittain-George works in a hospital which takes staff security seriously and has seen attacks decline, but she says elsewhere in the health service security “isn’t stellar” and has been frustrated by the unwillingness of police officers to investigate.

She says a man told an A&E receptionist that he intended to wait outside to kill her when she left work.

“The police didn’t care. They said, ‘It’s just a threat and it isn’t important.’ But everyone knows that a threat to your life is an offence and it is prosecutable.”

Nurses’ leaders say the intense pressure on the health service has fuelled attacks on staff.

Kim Sunley, of the Royal College of Nursing, described it as “an absolutely shocking figure”.

“You see some horrible physical assaults – people being punched in the face, grabbed by the throat, limbs being broken, chairs being thrown at people.

“There’s the physical impact of the injury, but also the psychological impact, the long-term effect. People are traumatised.

Many assaults are carried out by people who lack mental capacity, but it is thought some claim mental disability as a way of dissuading the police from investigating.

NHS Protect has stepped in to secure convictions in cases when the police have decided not to act.

On the issue of ending security work, NHS Protect said in a statement that it was “not appropriate for us to comment in detail” before the consultation with staff ended on 1 March.

But it confirmed that it was consulting staff about plans under which “our organisation would not be tasked with security management work”.

It added: “Work continues on the potential of identifying who might be best placed to take the lead on guiding this work, if it is felt appropriate that another body should take it forward”.

A Department of Health said its proposals come amid a “persistently high numbers of these unacceptable incidents”.

A spokesperson added: “NHS staff work incredibly hard in a high-pressure environment, and it is completely unacceptable for them to be subject to aggression or violence.

“Trusts should have no hesitation in involving the police and pressing for the strongest penalties against offenders.”

A week of coverage by BBC News examining the state of the NHS across the UK as it comes under intense pressure during its busiest time of the year.

Are you an NHS member of staff who has been assaulted at work? Email haveyoursay@bbc.co.uk with your experiences.

Please include a contact number if you are willing to speak to a BBC journalist. You can also contact us in the following ways: