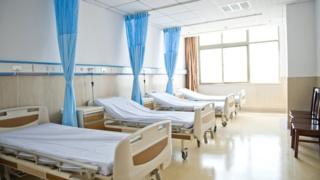 “Significantly high” death rates have been recorded at 19 of England’s 133 NHS trusts, a BBC investigation has established.

Blackpool Teaching Hospitals Foundation Trust had the highest number of excess deaths – 1,878 over the five years.

The analysis reveals a strong link between high mortality rates in England and lower than average doctor numbers.

Find out about your NHS trust

The analysis was conducted by Prof Sir Brian Jarman, co-director of the Dr Foster Unit at Imperial College London, which monitors NHS performance.

He said: “What we’ve found is that not only do those hospitals which have the very high death rates have less than the average doctors per bed than the national average, nearly all of them have more overcrowding than you would expect.

“Over the last 25 years in England we have doubled the number of admissions and we’ve halved the number of beds. If we cut more beds – and particularly if we cut the beds without proving that we have got adequate care in the community – I think that’s an extremely dangerous way to run a health service.”

This winter has seen hospitals across the country trying to cope with record occupancy levels, often way above the 85% capacity safety figure recommended by experts.

Prof Jarman examined mortality rates using a measure known as the Summary Hospital-Level Mortality Indicator (SHMI) which covers deaths that occur both in hospitals and within 30 days of discharge.

The 19 NHS trusts with significantly high mortality rates all had below average numbers of doctors per bed and those with low death rates had above average doctor numbers. The average for medic staffing in England was 83 doctors per 100 beds.

Dr Chris Moulton, vice-president of the Royal College of Emergency Medicine, said: “The figures show that there is really a postcode lottery. If you live in some parts of England your chance of dying if you’re admitted to hospital with the same condition are much higher than others.

“Of course, the hospitals with the worst numbers of staffing and the worst facilities are invariably in the areas with the biggest change in demographic and also the patients who are the sickest and most needy.”

Prof Mark O’Donnell, medical director of the Blackpool trust, said SHMI should not be viewed in isolation and warned against thinking that excess deaths were the same thing as avoidable deaths.

He said the trust had focused efforts on improving the treatments patients received, particularly in the first 24 to 36 hours after admission. It was now recording a “growing and sustainable reduction” in mortality figures.

He added: “Any discussion around SHMI figures must recognise a number of factors including the health of the local population.

“Although there are pockets of affluence, the population of Blackpool is one of the most deprived in England. Furthermore, levels of HIV infection, drug misuse, alcohol misuse and anti-depressant prescribing are amongst the highest in England and male life expectancy is the lowest in England.”

He said: “One of the reasons why mortality figures are as bad as they can be in Blackpool is that some of the people being admitted are in a pretty bad state when they arrive.

“The council does Herculean things – but they are struggling, as most councils in England are, with funding adult social care.”

NHS Digital, the body which provides statistics to the NHS, said it was wrong to rank trusts according to their SHMI, and that it used a different methodology in its own calculations.