When David Garnett recommended his first novel, “Spaces of the Dark” (1951), to the new publishing firm of Rupert Hart-Davis, he suggested that Mr. Mosley might want to use a pen name. Mr. Mosley rejected the idea. With the publication of his experimental third novel, “Meeting Place,” he began building a reputation as one of Britain’s most adventurous postwar writers.

“Small gestures, looks, ways of talking and moving or maintaining silence are particularized, while the larger actions that enclose them move in widening circles from opacity to enigma,” the novelist Saul Maloff wrote in The New York Times Book Review of “Impossible Object” (1968), a family drama told in eight seemingly independent stories.

That description fit more than one novel by Mr. Mosley. He continued to push the outer limits of narrative in the five-volume series known as “The Catastrophe Practice,” which he began in 1979.

The fifth volume in the series, “Hopeful Monsters” (1990), told the intellectual and political history of the 20th century through the eyes of a German-Jewish psychoanalyst and her husband, an English physicist. It won the Whitbread Award. The novelist and critic A. N. Wilson called it “the best English novel to have been written since the Second World War.”

Mr. Mosley told The Independent in 2003: “One of the psychological reasons that I tackle the subjects I tackle, is that I have my own troubles with my own heritage. This makes me interested in the hard things going on in the world.”

When Mr. Mosley’s father ran for Parliament in the late 1950s on an anti-immigration platform, his son, who had recently abandoned his atheism and converted to Christianity, confronted him.

“I was full of passion, but I didn’t know if I was trying to save his soul or my own,” Mr. Mosley told The Guardian in 2009. “When eventually I was let into his office, I said to him, ‘You are being wicked. You’re being insane. Just as you were in the 1930s.’” The two did not speak for many years. 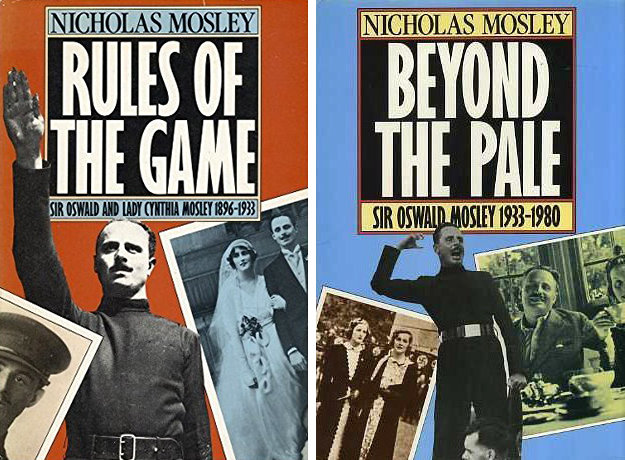 Two volumes of the biography of Sir Oswald Mosley.

The books were praised as honest and insightful. Jon Manchip White, reviewing the one-volume American edition in The Chicago Tribune, called it “a brilliant and a painful book, fascinating on both the emotional and the intellectual level.”

Sir Oswald’s widow thought otherwise. In “Efforts at Truth: An Autobiography” (1994), Mr. Mosley recorded her reaction to the biography as “the degraded work of a very little man.” In one letter to the media, she wrote: “It’s all very well having an Oedipal complex at 19, a second-rate son hating a brilliant father, but it’s rather odd at 60. Nicholas wants to get his own back on his father for having had more fun than he’s had.”

Nicholas Mosey was born on June 25, 1923, in London. On the death of his aunt, Irene Curzon, in 1966, he became the third Baron Ravensdale, and from his father he inherited the title of baronet.

He grew up, from the age of 4, in a large Elizabethan farmhouse in Denham, Buckinghamshire. After graduating from Eton and leaving the military, he studied philosophy for a year at Balliol College, Oxford.

In 1947 he married Rosemary Salmond. The marriage ended in divorce. He later married Verity Raymond, who survives him. In addition to her and to Marius, their son, Mr. Mosley is survived by three children from his first marriage, Ivo, Robert and Clare Mosley; a stepson, Jonathan Bailey; a half brother, Max; 19 grandchildren; and 10 great-grandchildren.

Mr. Mosley suffered from a heavy stammer. Sessions with Lionel Logue, the speech therapist who had worked with King George VI, did not cure him, but did, he later said, give him confidence and hope.

Mr. Mosley dismissed his early novels, written under the influence of Proust and Faulkner, as “very Angry Young Man, all gloom and doom.” After falling under the influence of the Rev. Raymond Raynes, the superior of a monastic order known as the Anglican Community of the Resurrection, he began editing The Prism, a small religious magazine. He also wrote “The Life of Raymond Raynes” (1961) and “Experience and Religion: A Lay Essay in Theology” (1965).

He returned to fiction, in “Meeting Place,” with a new stripped-down style and a new fictional approach. “I’m going to the inner ways of seeing things,” he told The Review of Contemporary Fiction in 2002. “What is important is the way of seeing the story.”

In “Accident,” his breakthrough novel, the death of a young man in a car crash becomes a study of marriage, infidelity and manipulation. Mr. Pinter, intrigued by Mr. Mosley’s oblique way with narrative and psychology, approached him to turn the book into a screenplay for Mr. Losey, with whom he had worked on “The Servant.” Dirk Bogarde took the lead role of an Oxford don in the film version, released in 1967.

After “Natalie, Natalia,” about a mentally unstable politician who enters into an affair with a colleague’s wife, Mr. Mosley embarked on “The Catastrophe Practice,” a clearly uncommercial project that Secker & Warburg published on condition that Mr. Mosley write the biography of his father.

Mr. Mosley wrote two additional memoirs, “Time at War” (2006), about his military service, and “Prospects of Peace, or the Presence of Infinity” (2009), which described his marriages, his love affairs and his religious journey.

“It’s very fashionable now to say one has had a terrible life,” he told The Guardian in 2009. “But I have had a rather good one.”