English choral music was originally meant for worship and would be heard in a state of quiet meditation. Indeed, this music would have been performed (and often still is) by a choir divided in half — facing one another, rather than the congregation. In my own practice writing this sort of music, this is an important distinction: It is an observed private ritual. Nobody is meant to clap, and the music is not presented to an audience for approval; rather, it is meant to guide the mind out of the building into unseen heights and depths. It was not originally intended to happen at 7:30 at night for the pleasure of an audience coming from work, with just enough time for a rushed Chablis before the warning gong goes off, quickly checking ticket stubs and crawling over other patrons’ coats.

When I compose, I find myself returning to this tradition, particularly as it relates to creating musical drama without a Romantic sense of ebb and flow leading to a climactic moment. You can have a thrilling 90 seconds with roller-coaster harmonies focusing on two words only, followed by a single line of plainchant, followed by counterpoint outlining harmonies completely at variance with what we would understand to be the rules.

Having the music be a meditative space, with micro-narratives and different areas of intensity, feels more intimately communicative than expecting everybody to agree: “Ah, that was the sad bit,” and “That was the climax right there.” 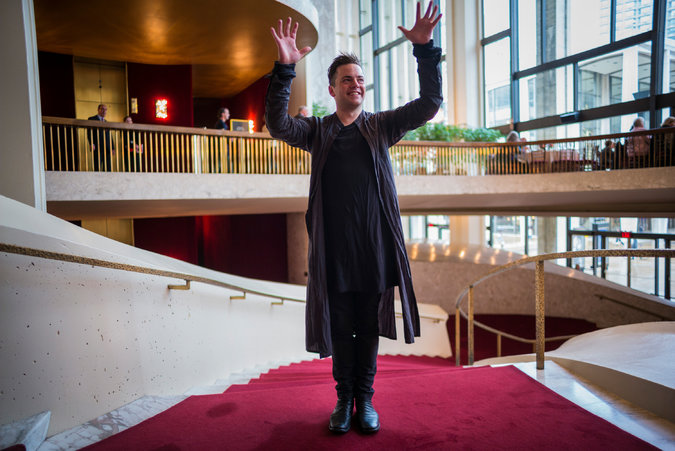 One of the most moving things about this musical tradition is happening upon it: walking through London and ducking into St. Paul’s Cathedral, for instance, and hearing the buttery luxuriousness of one of Herbert Howells’s canticles (a pair of texts sung, in the Anglican tradition, during Evensong), standing up the whole time. You’d be amazed how the body perceives musical detail when standing up: The difference between unison voices and voices in harmony, the length of line, subtle dynamic shifts — all hit you directly in the gut rather than in the sometimes detached concert muscle.

It is important to note, though, that this music is now actively performed and recorded in nonliturgical settings. Some of the more obscure 15th- and 16th-century large-scale choral works that would be awkward to include in modern worship (those of Cornysh, Fayrfax and Browne jump to mind) have been preserved almost entirely by excellent groups like the Tallis Scholars or Stile Antico. “O Sing Unto the Lord” calls attention to these more obscure composers, and in my fantasy world, everybody who reads it will immediately seek out as many recordings as they can find.

One of the small frustrations I had with the book is Mr. Gant’s tendency to offer what can feel like unnecessary superlatives, like “Thomas Tallis is easily the best composer in this story so far, and one of the two or three best of all.” (He then goes on to enumerate all of the ways in which Thomas Tallis is inarguably a fantastic composer.) Of Britten’s choral writing, he claims that the “Missa Brevis” is “the best of [his] commissioned liturgical works” — I found myself whimpering into the pages, “But what about ‘A Hymn to the Virgin,’ with that macaronic text and that Jacob’s ladder up to the lines ‘Of all thou bearest the prize, Lady, queen of paradise’?”

After a thorough discussion of Howells, I felt something missing, and called out in silence, “What about ‘A Hymn to Saint Cecilia,’ with that toe-curlingly melismatic descant?” I have 12 recordings of that on my phone alone, and come St. Cecilia’s day in late November, most everybody I know gets an inbox stuffed with as many recordings as the mail server can withstand.

To be steeped in this tradition is to have one’s strange, private favorites based on nothing more than instinct. This is especially true with music learned in childhood: Sometimes it’s a little turn of phrase in a set of Lamentations by Mundy (circa 1529-1591), or an outrageous chord progression in a Stanford (1852-1924) motet. To start ranking composers working in this tradition does a small disservice to the countless moments of accidental transcendence that are possible not just in the writer’s hand, but in the buildings for which the music was written, in the subtle personal intimacies of a small choir’s members looking at one another directly in the eye across the chancel.

But I would urge everybody interested in English history to buy this book at once: Mr. Gant maneuvers so elegantly between the better-known historical narrative and the music that reacts to and supports that political ecosystem. The tension between Protestantism and Catholicism is easily observed throughout the music of composers who lived through various monarchs in the late 16th century, notably Byrd and Tallis, whose styles varied widely depending on “external conditions”; Mr. Gant cites Beethoven and Stravinsky as modern counterparts to this sort of wild stylistic variation over a long career.

Whenever I read about Byrd or Tallis and the political complexities of their day, I laugh thinking about the luxury we have as composers now to be almost entirely free of this sort of top-down stylistic rule-making. We read about it happening to composers living in the Soviet Union with a historical distance, and living artists older than I have been through difficult periods of navigating their own musical pleasure within the exigencies of making a living.

But it certainly wasn’t the case that a despotic president suddenly informed everybody one day, as Archbishop Cranmer suggested in 1571, that “in the choir no more shall be used in song that shall drown any word or syllable.”

Mr. Gant writes, of this intervention from above: “The Tudor musician, ever the pragmatist, did his best to carry on being true to his inheritance and beliefs, while at the same time not getting into trouble, at least until the next change came along.”

He writes about Byrd, in particular, as constantly speaking in a sort of coded language. Writing music as a Catholic through the “fluctuating fortunes” of those believers allowed him to create a rich body of work filled with the sort of personal yearning that makes the quiet practice of deep religious faith so poignant, gestures of longing revealed by a single surprising interval or subtle harmonic upheaval. I think about Byrd almost every day: when I’m trying to make a piece of instrumental music imply an emotional detail without spelling it out in neon. Mr. Gant’s book encourages the reader to revisit the gems of his output, from the oft-performed “Ave verum corpus” to the mournful “Infelix ego,” with its heart-rending final minute.

The whole time I was reading “O Sing Unto the Lord,” I was making copious notes to go and rediscover some forgotten anthem. Time after time, passing references to pieces I’ve sung and loved brought me sharp pangs of nostalgia, followed by a sense of gratitude that this tradition has been such an important part of my musical world.