The Hunters have thought plenty about trying to cut out the $100 they spend on cellphone service every month. Yes, they said, it’s a lot, especially when they don’t have health insurance and they stretch the last dollars from their $1,800 monthly income to buy diapers and gasoline.

But the cellphone tethers the couple together when Mr. Hunter leaves for his nearly $13-an-hour job at a call center and Ms. Hunter stays home with their three children — 9, 4 and 3 years old — here in the Utah Valley. They chat on his 15-minute breaks. It pains Mr. Hunter to be away from the children, so Ms. Hunter texts him photos of them making a snowman or playing on the backyard swing set. He sends her inspirational quotes from elders in the Mormon Church, to which they are both devoted.

The Hunters said they voted for Mr. Chaffetz in November, but Mr. Hunter said his comment sounded like something a “well-off person” would say — not a parent receiving food stamps, whose children are covered by Medicaid and who usually has $86 left over after paying the month’s mortgage and other bills.

Here in the heavily Mormon cities that run along the snow-glazed Wasatch Range, several of Mr. Chaffetz’s uninsured constituents said that, of course, they would love to be rid of the cellphone bills that cost their families $30, $50, $100 every month. But they said the savings would hardly be enough to afford monthly health plans for their families.

And how would they get by without their phones?

“A cellphone is a lifeline,” said Myla Dutton, executive director of Community Action Provo, a food bank and social-service nonprofit.

Jose Valdivia, 61, said he wouldn’t be able to quickly look up the latest engine modifications when he was repairing sport-utility vehicles at the mechanic’s shop where he works. His wife said they wouldn’t be able to send photos to relatives in Mexico City.

The couple spoke as they waited for an appointment at a free health clinic run by volunteer nurses and doctors two nights a week in Provo. Not surprisingly, smartphones abounded in the waiting room. People texted about dinner, called relatives with updates, held their children’s attention with a game.

Without her phone, Joana Delacruz, 45, said, she wouldn’t be able to see job postings from nursing employers, or check whether she should bring home some food for her 18-year-old son after finishing her 3-11 p.m. shifts managing a McDonald’s in Provo. 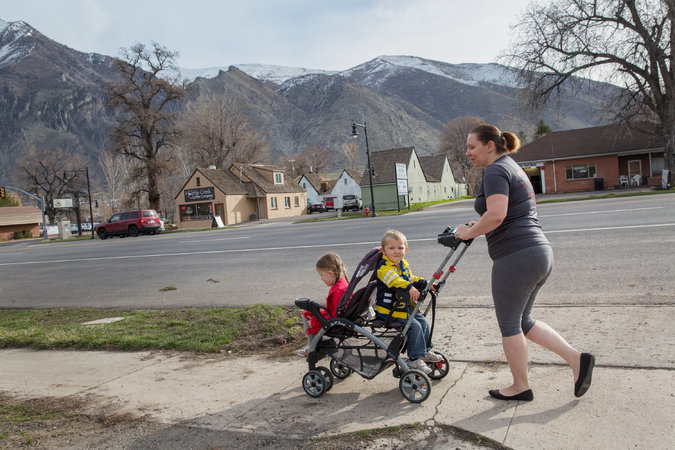 Ms. Hunter walked her son, Clark, and Valetta to preschool on Friday.

Ms. Delacruz said she had not had health insurance since she lost her job as a nursing assistant after she fell over a wheelchair last July and hurt her back. Workers’ compensation took care of the medical bills. But despite physical therapy and cortisone shots, her back still hurt, and she did not want to aggravate it by returning to a job that required lifting and moving patients.

She earns about $1,300 a month and has little left after paying $750 in rent (her son sometimes helps out), a $400 car payment and the $50 cellphone bill. The phone keeps her connected with her mother in Mexico. Her son texts her to remind her to get quarters for their building’s laundry machines. She scans job postings that arrive in her inbox.

“There’s no other way,” she said. “It’s for work. It’s for relationships, it’s for my kids, it’s for my friends, everything. Life is hard to be by yourself.”

At home in Springville, the Hunters’ phones buzzed at 7 a.m. on Friday with text messages of support. It was a big day: Mr. Hunter had been taking computer classes after work at the call center, and Friday was the day he would take a test for his A+ certification, the first step toward what the family hoped would be a better-paying job working on computer systems.

The texts were from the Hunters’ “allies” — wealthier families who volunteer to provide social support to lower-income families in the area.

“Good luck, Anthony,” the messages read. “We’re thinking of you. You got this.”

“We’re praying for you.”

“Did you text them back?” Ms. Hunter asked her husband as he fried two eggs from their backyard henhouse.

The couple said they had searched online but had been unable to find an affordable plan under the Affordable Care Act, and had paid tax penalties for not having insurance. They are both healthy, though when Mr. Hunter’s long-running back pain flares up, he deals with it by lying on the floor, strapping on a back brace or getting a massage from his wife.

They consider themselves conservative and think that health care should not be a federally mandated purchase, but should be left to individual states. If they lived one state over in Colorado, which expanded Medicaid under the Affordable Care Act, they might have qualified for it. Utah approved a small Medicaid expansion, but the Hunters said it did not cover them.

On her cellphone, Ms. Hunter said, she frequently checks her family’s bank account balances, updates her husband about filing their tax returns and sends notes of encouragement when he is gone.

“He needs to know we believe in him,” Ms. Hunter said. “That’s the biggest thing.”

At 2:41 p.m. on Friday, two loaves of bread were baking in the oven, the two youngest children were playing in the living room, and Ms. Hunter was starting to chop potatoes for dinner when her phone chirped with news from her husband’s test. It had not gone well.

“Do you know how far off you were?” she texted.

Mr. Hunter said he would get gas and head home. Retaking the test could cost more than $100, but they would talk about their next steps when he got home.

“We’ll have to wait,” Ms. Hunter said, phone in hand. “It looks like he probably doesn’t want to text.”