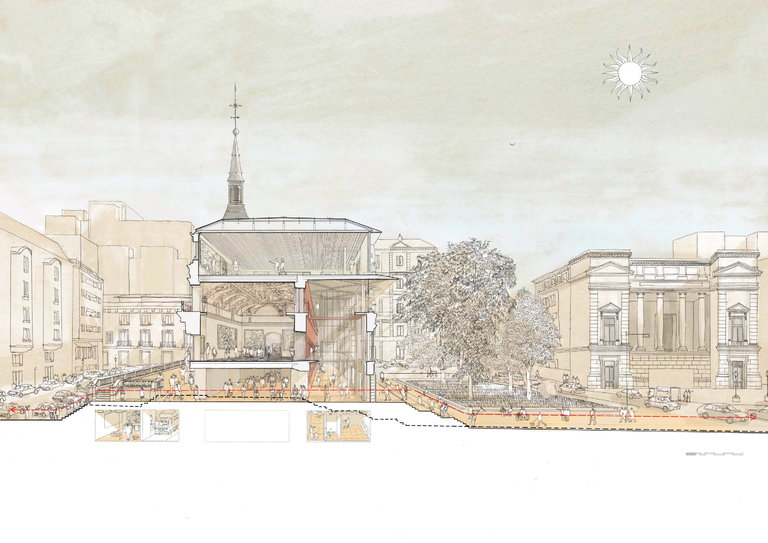 A rendering of the winning design for the Prado extension.

MADRID — The British architect Norman Foster is set to transform a former palace building in Madrid into a $32 million extension of the nearby Prado museum, which holds one of the world’s most important collections of paintings.

Mr. Foster, in a joint project with Carlos Rubio Carvajal, a Spanish architect, will renovate the Hall of Realms, which once formed part of the Buen Retiro palace built by King Felipe IV. The hall dates to the 17th century and was part of a secondary residence in which the king would receive foreign ambassadors.

The project is designed to give the Prado more exhibition space. It will be the second major extension for the Prado, after Rafael Moneo, a Spanish architect, was chosen in 1998 to build a new wing for the museum (which opened in 2007).

The museum announced the selection of Mr. Foster and Mr. Rubio on Thursday, after a jury reviewed the proposals of the eight competition finalists, who had already been shortlisted from an initial list of 47 teams of architects.

The jury highlighted the architectural merits of the team’s museum refurbishment plan for the building, but also the fact that “it strengthens and consolidates the identity of the Museo del Prado campus.” Some of the surrounding streets will also be turned into a new pedestrian area that will in effect link the museum to the Retiro park in the heart of Madrid.

Construction work on the extension is expected to last about 16 months and start in 2018, a year before the Prado celebrates its bicentenary. The new building will have about 61,500 square feet of available space, of which about 27,000 square feet will be used to exhibit works, about 17 percent more than the museum’s current exhibition space. The plan also foresees creating a large entrance atrium while keeping the building’s original balconies.

Mr. Moneo’s modern wing took six years to finish and its final cost was more than three times its original budget. Even after adding that wing, however, a significant part of the vast collection of the Prado has still had to be kept in storage.

The museum’s management said in a news conference on Thursday that it had not yet decided which artworks would be in the new extension, although Miguel Zugaza, the Prado’s director, suggested it could be a “magnificent” opportunity to showcase the museum’s Baroque collection, as part of the broader plan to return the building to its original beauty.

The palace building was acquired by the Prado last year. It had also served as an army museum until 2005.