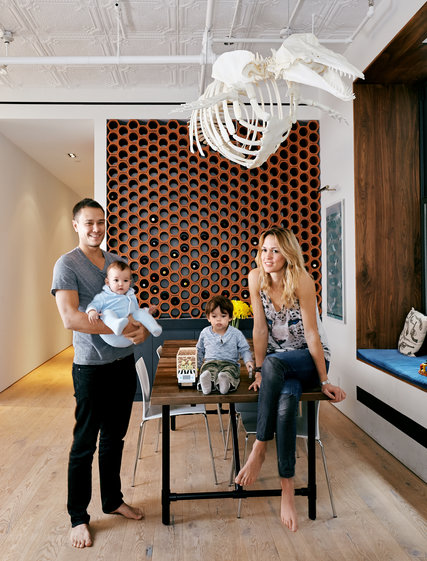 When James Ramsey and Jennifer Blumin bought a TriBeCa loft from the 1830s, they were determined to keep all the original details: the old windows, the tin ceilings, the brick walls. “You can feel the 19th century here,” Mr. Ramsey said, “and imagine the gas-lit street.”

To be sure, Mr. Ramsey, a principal of the design studio Raad, and Ms. Blumin, the founder of Skylight, which does adaptive reuse of historic spaces, introduced a few carefully chosen modernist elements: some white walls, pale oak floors and stainless steel Miele appliances in the kitchen. But it’s a style that Ms. Blumin described as “warm modernism.”

Now, a visitor stepping off the elevator is greeted by light filtering through the old glass and an urban grove of philodendron, palms and anthurium growing nearly as tall as the 12-foot ceiling. A teak daybed is piled high with pillows — the couple’s sons, Phineas, 2, and Theodore, 8 months, have been known to lose themselves among those pillows — and a speckled sheepskin is tossed over a sofa.

Beyond the welcoming fireplace is a media center and a low-slung cabinet made of carved walnut, designed by Mr. Ramsey to evoke vintage stereo cabinetry, a piece he has re-created for clients. “Remember the speakers in the ’60s and ’70s?” he said.

The kitchen and dining area is in the middle of the loft, a space that is often dark in 19th-century buildings, because all the windows are at the front and back. Mr. Ramsey took advantage of the eight-foot space between this building and the neighbor’s, punching out three windows: one to bring light into the eating area, a second in a guest room and a third in the children’s room. (The one by the dining table has a window seat, which comes in handy when the couple entertains, as they do nearly every Sunday.)

The Miele appliances in the kitchen are hand-me-downs from friends who were renovating. “It’s amazing what people throw out,” Mr. Ramsey said. And the 300-bottle wine rack, made out of terra cotta drainage pipes, was an inspiration borrowed from another friend, a well-known fashion designer: “We stole the idea from our neighbor, Lela Rose, who lives across the street and has one.”

A visitor can’t help noticing another design element in the loft, one that complements all those 19th-century details — a “natural-history feel,” as Ms. Blumin put it. “We love wacky animals,” she said.

In fact, there are animals everywhere. A Beluga whale skeleton made from a plaster mold is suspended over the dining table. Photos of giant squid decorate the guest bathroom. A fish mask hangs on the wall in the guest room, and a walrus mask in the boys’ room. And at the foot of the master bed is another sheepskin, this one black and white.

“It’s the dog substitute,” Ms. Blumin said, for “the English sheepdog we don’t have.”

Why don’t they have a dog?

“Jen wants one,” Mr. Ramsey said. “But I just know I’ll be the one walking it on a day like today.”

And he’d prefer to watch the snow from inside, through the 19th-century windows.