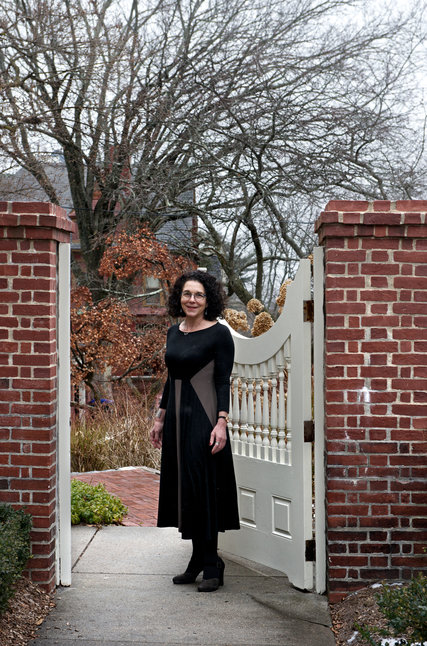 When Rosanne Somerson was promoted in January of last year, the good news was that her new job came with a historic house on a lush piece of property. The bad news? She had two and a half weeks to furnish it.

Ms. Somerson, 60, is the interim president of Rhode Island School of Design, also known as RISD. A little more than a year ago, her predecessor, John Maeda, abruptly left for a position at the Silicon Valley venture capital firm Kleiner Perkins Caufield & Byers.

Ms. Somerson, the school’s provost at the time, took the reins, and thereby inherited a circa-1894 Colonial Revival house at 132 Bowen Street, where RISD presidents had lived since 1962. Among other responsibilities, she had two weeks to prepare the house for a V.I.P. event with cultural dignitaries, including Marian Wright Edelman.

“There was not a lot of inhaling that first month,” she recalled.

Transferring her own things to Bowen Street was not an option. Given that her title included the word “interim,” Ms. Somerson’s primary home was — and remains — in Westport, Mass., 30 miles from Providence. It would have been impractical to fill a 21-room, three-story house for what might be the short term.

So she invited RISD’s faculty, students and alumni to do it. The result is an elegant second residence for Ms. Somerson and a showcase of RISD talent for everyone else. Trustees, parents, visiting lecturers, local politicians and even trick-or-treaters who cross the threshold are wrapped in its culture.

On a recent afternoon, Ms. Somerson sat on a dove-gray sofa with gray-and-white patterned pillows — fabrics by Rachel Doriss (B.F.A., 1999), now the design director of the textile company Pollack. In front of her was a simple wood coffee table by John Dunnigan, a furniture professor at RISD. Underneath lay a black-and-persimmon-striped wool carpet by Martin Emlein (B.F.A., 2009), a designer with Merida Studio.

“I know the culture really well,” said Ms. Somerson, who arrived at RISD in the 1970s as a student, returning in 1985 to teach.

“Thirty,” said Pat Brown, a landscape designer who coordinated the logistics of the house-decoration project and was on hand for a tour of the new acquisitions. (She also grows and arranges fresh flowers for the rooms.)

In fact, she was trained in industrial design and helped found RISD’s furniture design department in 1995, heading it for many years. Her own work includes pieces that she and Mr. Dunnigan, along with Peter Walker, created for a new RISD dormitory in 2006. A desk and chair from the group sit upstairs, in a second-floor bedroom.

Ms. Somerson is hardly the first RISD president to make a big show of the school’s creativity, for who could resist such easy pickings? Mr. Maeda used the house’s built-in library shelves to exhibit his personal curios, each tagged with a thought bubble containing a message in Korean. (The project was by Jiwon Choi, then a furniture design student, working with Lane Myer from the sculpture faculty.) Now the shelves hold books by RISD alumni, including Roz Chast and Shepard Fairey.

For Roger Mandle, who was president of the school from 1993 to 2008, living in the house is “not like assuming a throne,” he said. “It’s really taking charge of a community property that’s owned by everybody at RISD.”

He and his wife, Gayle, an artist, put notable marks on the place, renovating a group of rooms in the basement and lodging graduate students there. They also insisted that everyone who attended their social functions sign the walls in the antechamber next to the powder room. That included the governor of Rhode Island.

The dense graffiti was obliterated in the Maeda administration, but Ms. Somerson has paid it homage. A photography composite of the original wall by Peter Goldberg, an alumnus, hangs in the little room.

A number of the new pieces were donated, others lent. Dale Broholm, a senior critic in the furniture department, worked for half his usual rate when he built a mahogany dining table, whose top is inlaid with words arranged by Jan Fairbairn of the graphic design faculty. Ms. Somerson said that the mahogany came from RISD’s rare wood collection. This helped make the final cost “comparable to commercial tables from a not-high-end source.”

The budget for the new décor, she added, was “unbelievably frugal for a house of this size and beauty,” because she needed resources for other projects.

“There’s a lot we’re trying to accomplish,” she said. “One of my big initiatives is to keep the rate of tuition increase low.”

Correction: February 26, 2015
An article on Feb. 12 about efforts by Rosanne Somerson, the president of the Rhode Island School of Design, to furnish the historic house provided to her as the school’s president, misstated the surname of a faculty member. She is Jan Fairbairn, not Fairbanks. The article also misspelled the surname of the design director of the textile company Pollack, who is an alumna of the school. She is Rachel Doriss, not Dorris.