Home House Design On Location: Trading a Beach House on Fire Island for a Farmhouse... 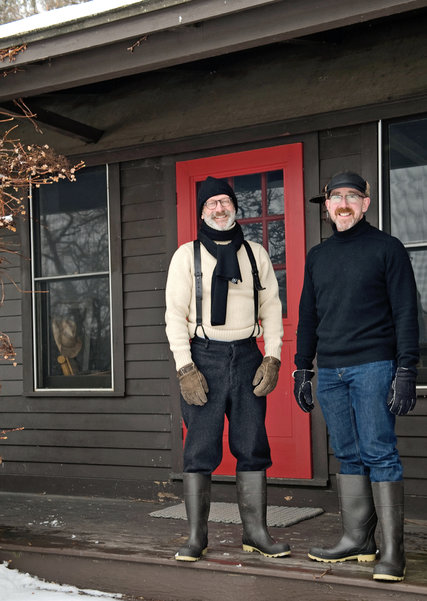 A House in the Woods

After 25 years of owning a beach house, Dr. Sam Grubman and Paul Morris decided to trade it in for a house in the woods. And not for the happiest of reasons, initially at least: Dr. Grubman, an allergist who is now 55, had developed melanoma.

“We knew that it would be a bad decision to continue spending time in the sun,” said Mr. Morris, 54, an art dealer and founding director of the Armory Show art fair. “And when we worked out the numbers, we realized we could get a bigger place.”

So in 2009, after selling their home on Fire Island, the couple bought a five-bedroom farmhouse in upstate New York for $800,000. The house sits on 13 acres of wooded farmland with a two-acre spring-fed pond and four dozen or so gnarled apple trees dating to the mid-19th century, when the house was built.

There was plenty to love about the house, too: a claw-foot bathtub sitting out in the open in the master bedroom; a living room with a double-height space open to the second floor, with bookcases all around.

Even better, renovation wasn’t really necessary because the previous owners had already done a lot. So the couple contented themselves with building a dock on the pond.

Settling in, however, took some doing.

“We love this house, but it took us a while to figure out how to use it in every season,” Mr. Morris said.

For Dr. Grubman, part of the answer involved learning to garden. Growing up in Brooklyn, he had limited green space. And at the beach, gardening wasn’t on the agenda. But now Dr. Grubman began to take classes at the New York Botanical Garden, planting trees and elaborate flower beds around the property, and tending to the older trees, particularly in the winter, when heavy snow has to be removed from their branches to keep them from breaking.

Mr. Morris, an avid art collector, immersed himself in decorating, hanging art he had stored for more than 30 years. Although, as he noted, “It’s hard to hang any art in this house because it has so many windows.”

There was plenty of space to furnish, though: about 3,200 square feet. So he made a list of all the furniture they needed and hired a contractor licensed to reproduce E. J. Audi furniture to make two dozen or so of those pieces.

Five years later, they’ve finally finished decorating and have acclimated themselves to rural life, which seems to suit them despite the challenges that come with living in an old house that has an antiquated, almost porous foundation.

“We’ve seen our share of wildlife coming into the house, like squirrels and snakes,” Mr. Morris said. “But we like snakes. They control everything else. It’s like the circle of life down there in the basement.”

And recently, he added, perceptions of upstate New York have changed radically. Now this feels like the place to be.

“It used to be that Fire Island was the sexy place,” Mr. Morris said, and “the Hamptons was for the elite.”

“Upstate New York,” he said, “was where people came who weren’t those things.”

Correction: February 6, 2015
An earlier version of this article omitted the title used by Sam Grubman. He is Dr. Sam Grubman, not Sam GrubmanGrubman.