Home House Design On Location: Where Howard Hughes Was Underfoot 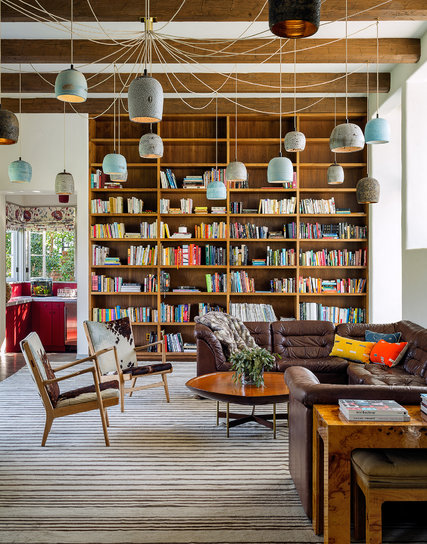 And Ash Shah, the homeowner who asked, looks thrilled to lead you down to the basement. His wife, Niroupa, well, she’ll stay upstairs.

“Ash was really enamored with the whole Howard Hughes aspect,” Ms. Shah said. “Me — less so.”

The billionaire movie mogul and aviation pioneer once owned the couple’s home, a sprawling Spanish Colonial hacienda in the Hancock Park section of Los Angeles.

Built in 1926 for a wealthy socialite by the architect Roland Coate, the house was first rented and later bought by Mr. Hughes, who was drawn in part by the Wilshire Country Club’s golf course (its manicured fairways run right past the backyard).

The decade or so that Mr. Hughes lived here was a pivotal time: He produced the films “Hell’s Angels” and “Scarface,” set a transcontinental airspeed record and romanced Katharine Hepburn.

As much as Mr. Shah, 47, a former movie producer turned restaurateur, was intrigued by the Hollywood lore, he and his wife had a more prosaic attraction to the house: with three children and another on the way, they needed space.

The couple were living in Beverly Hills when Ms. Shah, now 35, remembered an acquaintance telling them that his house was too big for him and he was considering a move. “So I emailed saying, ‘Would you sell me said house?’ ” she recalled. “I hadn’t even seen it. It just all came together in my head.”

It came together on paper, too. In 2011, the couple paid $6.3 million for the roughly 9,000-square-foot house and embarked on an extensive renovation that included a small addition and cost around $300 a square foot.

The chief problem, as they saw it, was the outdated, chopped-up floor plan, with old-fashioned servants’ quarters that were removed from the main living spaces. “We couldn’t be an entire half-acre away from our children,” Ms. Shah said. “And we entertain a lot, so we wanted to make the common spaces a little more open. We just modernized it and tried to make it a little brighter.”

When it came to furnishing the rooms, they also favored their own eclectic tastes rather than trying to conform to the historic style. The couple transformed a pool room into a ’70s-style plywood rec room and redid Mr. Hughes’s former wood-paneled study in striking black lacquer. “We’re fun people,” Ms. Shah said. “That sort of old Spanish dark woods didn’t go with us.”

They turned the adjoining living room into a showcase of midcentury design, with a pair of Kaare Klint safari chairs, a Maison Charles glass-and-brass coffee table and custom leather couches in the style of Edward Wormley’s classic Gondola sofas. Laura Adams, a Los Angeles-based interior designer, helped choose and arrange the décor — not that she needed to do much directing.

“They have great taste, and they’re into beautiful midcentury pieces,” Ms. Adams said. “I helped them use those pieces with more-functional pieces that are kid-friendly.”

Occasionally, her decorating suggestions, like a bright yellow sofa for the children or kitchen counters made of brass (there is much gold throughout the house), clashed with her husband’s subdued style.

The couple had “serious fights about tiles,” Ms. Shah added. But now that the house is finished (and she got her gold Ann Sacks kitchen tiles), they both said they feel very lucky. They have a home with plenty of space in a genteel neighborhood, a large front yard for their children and a backyard gate that opens onto the exclusive golf course that drew Mr. Hughes. And they have his vault.

It’s not much of a sight, really, just a little concrete-walled room that has been converted into a wine cellar. But the original steel door is still there, along with the enticing mystery of what Mr. Hughes may have stored behind it.