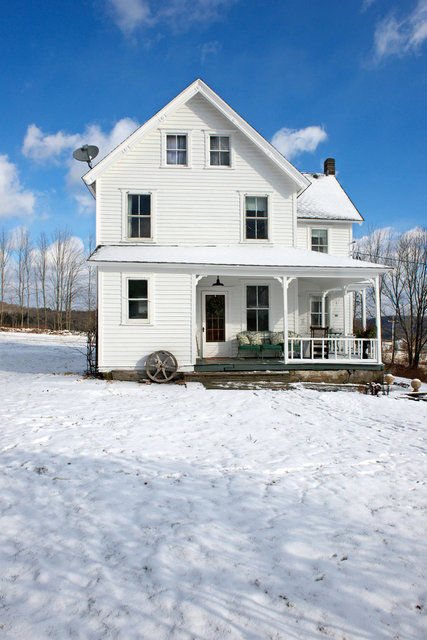 There is a lesson to be taken from how Christina Salway and her husband, John Moskowitz, came to buy a farmhouse near Callicoon, N.Y., in Sullivan County, a year and a half ago. The lesson, depending on your point of view, is either don’t peer into the windows of real estate offices or — if you do and find the country home you’ve always wanted — seize the opportunity.

Ms. Salway, 32, an interior designer based in Brooklyn, and Mr. Moskowitz, 33, who is planning to open a restaurant in the city, seized. This despite the complicated logistics of the deal, the farmhouse’s derelict condition and the fact that they already owned an upstate retreat, which they had purchased in 2008 and spent months renovating in time to have their wedding there.

As much as they loved that “tiny little jewel box,” as Ms. Salway called the 600-square-foot, two-bedroom cottage, by 2013 the couple had an infant son. “It suddenly made the house very small,” she said. “Anytime we had guests, they were sleeping in the living room.”

It was under these circumstances that they took a drive one weekend to Callicoon, to visit an antiques store. The store was closed, but a real estate office was open, and they spotted a listing for a 2,000-square-foot farmhouse on 43 acres, set off from the road by a half-mile driveway.

“John’s eyes lit up,” Ms. Salway said, although she had a different impression, especially after touring the house in snowy January and seeing how much work it needed. Windows were falling out of their frames, ugly linoleum flooring and dropped ceilings had been installed, the kitchen was stripped, and no one was living there to maintain the plumbing or electrical systems.

“When we left I was like: ‘Whoa. Somebody’s got a lot of work ahead of them,’ ” Ms. Salway said. “The little house just needed to be nursed back to health. Whereas this was, for us, an enormous undertaking.”

Still, they both knew that to find an old farmhouse near a town they liked, set far off the road, on rolling hills, with property lines extending as far as the eye could see — and priced within their budget — was “one in a million,” as Ms. Salway put it. So after a brief bidding war with a falconer who wanted to use the property for his birds, the couple bought the place for $205,000.

The deal required them to sell their cottage. In the 30-day period before the deed was transferred, Ms. Salway and Mr. Moskowitz stayed there and drove to the farmhouse to work, while Ms. Salway’s mother watched their infant son. They were in a race to get the downstairs into a condition where they could safely stay there overnight, without driving back to the city each day.

Then, more slowly, they began tackling the rest of the house. For bigger projects, like the plumbing and insulation work, they hired professionals. For cosmetic fixes and smaller projects, like pulling up the linoleum and installing kitchen cabinets, they did the work themselves, often with the help of friends and the couple’s families. The renovation cost around $30,000.

Being inside the farmhouse now, it’s hard to believe it was ever a wreck. The hardwood floors revealed under the linoleum are in great shape. The kitchen is open and bright. And Ms. Salway has decorated with a countrified mix of Craigslist finds (a brass bed, a pair of albino leather sofas), furniture and art she got from clients (a dining table, 19th-century portrait paintings) and items found in antiques stores (ceramic plates of the 50 states).

The rooms are atypically spacious for a farmhouse, too. The vibe is loose and welcoming. “There’s nothing perfect in this house,” Ms. Salway said. “I just wanted everybody to feel like they could flop around.”

For Mr. Moskowitz, who grew up in the city, owning 43 acres is thrilling. He still isn’t sure what to do with it, other than puff out his chest.

“It’s goofy, but there’s something very manly about having land,” he said. “I’ve been living on top and under a million people all my life. Being able to get away from that is incredible.”

Both are glad they went for the farmhouse, even though it may take years to fully grow into the property’s abundant proportions.

“Truthfully, I don’t think we’re quite grown up enough for this house,” Ms. Salway said. “But it landed on us, so we said maybe the timing isn’t the best — but you just jump.”