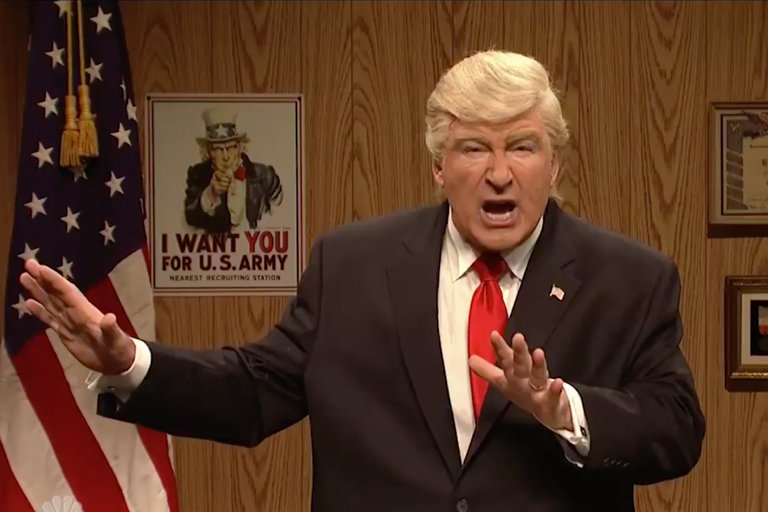 In its first new episode in nearly a month, “Saturday Night Live” featured Alec Baldwin in a double dose of topical comedy, first in the show’s cold open, portraying President Trump as he typically does, then later reprising the role in a sketch where he also played the embattled Fox News host Bill O’Reilly.

“S.N.L.,” which was hosted this week by the comedian Louis C.K., began with Mr. Baldwin as Trump, addressing a roomful of perplexed supporters in Union, Ky. “We all love Trump don’t we?” he told the crowd. “We do, we do. I just had an amazing week, folks. I met with leaders from China, Egypt and Jordan. Gorsuch was confirmed and the media is saying nice things and no one is talking about Russia. Well, what a difference just 59 Tomahawk missiles can make.”

Fielding a question from a supporter who said he had lost his coal-mining job, Mr. Baldwin answered, “As president, I promise, I’m going to do everything I can to make sure you people work in coal for the rest of your lives. And your kids will work in coal, and your grandkids. It’s going to be incredible.”

Another audience member noted his failures on health care reform, but said he didn’t blame the president for being unable to get the job done.

“You mean Paul Ryan couldn’t,” Mr. Baldwin retorted, referring to the House speaker. “I did everything I could. I made phone calls, I jumped into a truck and I posed for pictures. I went, ‘Honk! Honk!’ But I won’t give up.”

A third supporter said he had a wife who was addicted to painkillers. “It’s Susan Rice,” Mr. Baldwin interjected, talking about President Obama’s national security adviser. “Put her in jail, right?”

Actually, the man answered, his wife was already in a drug rehabilitation program. Mr. Baldwin said he could relate: “My wife doesn’t want to move either, ” he said.

When the supporter explained that the president still had his backing, Mr. Baldwin said, “That’s why I came here. You people stand behind me, no matter what. It’s like you found a finger in your chili, but you still eat the chili, because you told everyone how much you love chili. It’s tremendous.”

Later in the night, Mr. Baldwin returned as Mr. O’Reilly, whose Fox News program has lost several prominent advertisers after an investigation by The New York Times revealed multiple settlements over allegations of sexual harassment or other inappropriate behavior by Mr. O’Reilly.

At the start of his broadcast, Mr. Baldwin said he would at last address “the scandal everyone’s been talking about all week, a scandal no one thought I’d have the guts to address head-on, about the shocking allegations of abuse of power — that have been leveled against the Obama administration.”

After attempting to interview a reporter, and being informed that she no longer works for the company, Mr. Baldwin said, “Did she get the check?”

Speaking to the reporter Malia Zimmerman (played by the “S.N.L.” cast member Cecily Strong), Mr. Baldwin tried to elicit details on an interview she said she had conducted with Susan Rice.

“Yeah, like when she said no, did her eyes say yes?” he explained. “Sometimes they’ll do that.”

Mr. Baldwin then thanked the advertisers who had remained with his program, including products called Dog Cocaine and Eliquis, which he described as “Cialis for horses.”

In split-screen, Mr. Baldwin, now as Mr. Trump, said that he continued to stand by Mr. O’Reilly.

“I actually see a lot of myself in you, Bill,” the Trump character said.

The O’Reilly character answer, “That’s based upon?”

“I’m more familiar with this case than I am with, say, health care,” he added. “But I didn’t really look into it much, no.”

Louis C.K. Ends With an Appreciation

Before the show’s closing credits, Louis C.K. paid tribute to the comedian Don Rickles, who died on Thursday. “I just want to say, Don Rickles was the funniest man in the world and he was also a lovely, beautiful guy. I’ll miss him for the rest of my life.”