Home Gadgets On Technology: Is Social Media Disconnecting Us From the Big Picture?

But that’s not what has happened. Zuckerberg’s idealism is belied by his desire to duck responsibility for mediating the content of his site. On Facebook, the political divide has only been entrenched further. It’s the BuzzFeed dress debate, only for our entire lives: We are two countries, one that sees blue and black and the other that sees white and gold. The internet once offered outlets we could use to understand one another. But they are rapidly disappearing. 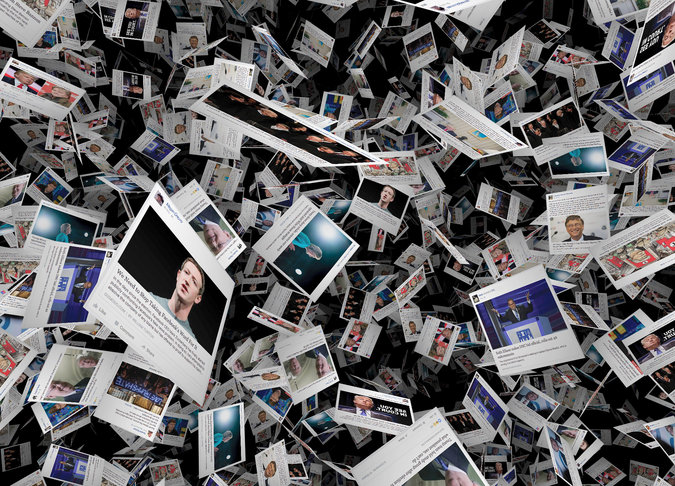 Most social media — like Facebook and Instagram — is curated by software built to manage the high influx of information flowing into it, but there have still been a few islands of digital wilderness, a Galápagos of sorts, where culture thrived untouched. They included Vine (whose closure was announced in October) and Snapchat, and even Tumblr, which were homes for marginalized ideas, theories and lifestyles.

The video-sharing app Vine was the first place I got a glimpse of cultures beyond my own, including those of the Middle East. I was able to see how some women there wanted us to see them: prospering, aware. A young woman living in Saudi Arabia who goes by the name Amy Roko used Vine to show clips of herself living her life — her version of normalcy — at the mall, goofing off at home. In her most viral video, she stares into the camera, her face covered in a niqab, save for her perfectly outlined eyes. “[expletive] called me ugly,” she snaps. “I said, [expletive] where?” The emphasis on the last word becomes the punch line as she whips off one niqab to reveal a second underneath. I was thrilled to realize that women living there could have a sense of humor similar to my own.

Vine was born as an app and intended to be a social community. But Vine links could be shared independent of the network, and people did so with abandon, meaning that Vines appeared scattershot around the web, defying the sorting mechanism of streams and feeds. They could land on your screen via text message, direct message, email.

Roko’s Vine was a riff on one originally posted by a young black American named Brionna London, who was miffed that someone thought she needed makeup to be pretty. You can draw a straight line from brown women in Saudi Arabia to black women in America, a marvel unto itself, a window into the way the internet flattens space and time — a vivid example of its fulfilling its promise to bridge divides. At Vine’s peak, it had more than 200 million monthly users who watched videos billions of times, and it excelled at showing these sorts of commonalities: that, say, black kids in New Orleans lived and looked a lot like white kids in Florida. (At the very least, they shared a similar humor and taste in music, which gave me hope that they would share a sense of humanity as well.)

And yet Twitter, which owns Vine and is struggling to turn a profit while keeping its main service appealing to advertisers, could seemingly no longer afford to keep the video feature (which reportedly costs millions a month to maintain) afloat. Following news about Twitter’s decision to close the service, there were rumors that outside companies made inquiries about purchasing Vine’s remains. But it’s most likely too late to salvage the community there.

In its earlier days, Snapchat offered its own version of cultural exchange. The app had an incredible series on “city life” that gave users direct windows into different worlds. People submitted short video diaries about life in their cities, which the company compiled into a single video, viewable by anyone using the app. I remember feeling delighted watching people in Istanbul and São Paulo showing off their routines and customs. But the company is now prioritizing “live stories,” which feature more mainstream events like the Super Bowl and music festivals. The effect is still fascinating, but less intimate. Snapchat seems to be betting that people are more interested in the familiar.

The future of Tumblr, the blogging platform whose endless warren of rabbit holes about gender theory, critical feminist thought and identity politics is unlike any other on the internet, is the most uncertain. Yahoo, its parent company, succumbed to financial struggles and has announced plans to be acquired by Verizon, raising questions about the future of its properties.

What we’re seeing with Snapchat, Tumblr and Vine reflects a larger shift in the social-media economy. User-generated content, by and large, is not lucrative at a scale that satisfies investors, and as a result, most social-media companies are changing direction toward other revenue streams. One of the more significant shifts is the move into social messaging. Semiprivate messaging applications — group text threads and applications like WhatsApp (which is owned by Facebook) and Slack — have grown in popularity as people move away from public arenas for conversation, a shift caused in part by spikes in unchecked harassment on major social networks. New features are introduced daily, it seems, to make messaging with your friends more “fun.” The latest version of the iPhone’s software includes the ability to make messages “explode” with confetti. WhatsApp now offers the ability to tag people in messages, as you might tag them in a photograph online. These changes have probably been spurred by messaging applications overseas, which used similar features to attract and retain customers. (Line, a Japanese company that built an addictive messaging app with 220 million monthly users worldwide, had one of the biggest initial public offerings — $1.1 billion — earlier this year.) These new messaging features work to bind private groups tighter together, by making it more fun to talk to one another than to engage with the world at large.

What happens when we would rather look inward? I have found something of an answer in a short story called “The Great Silence,” by Ted Chiang, about humankind’s search for signs of alien life. The story is narrated by a parrot in Arecibo, Puerto Rico, home to one of the largest radio telescopes in the world. “Their desire to make a connection is so strong that they’ve created an ear capable of hearing across the universe,” the creature begins. “But I and my fellow parrots are right here. Why aren’t they interested in listening to our voices?” The paradox is not to be missed: We are more interested in locating alien species than understanding the humanity among the species we already live with. The story ends on a somber note. “Human activity has brought my kind to the brink of extinction,” the narrator explains. “They didn’t do it maliciously. They just weren’t paying attention.”

Chiang’s lesson hits hard in this new political and cultural moment. Social media seemed to promise a way to better connect with people; instead it seems to have made it easier to tune out the people we don’t agree with. But if we can’t pay attention to one another, we might as well not live on the same planet at all.