The swelling interest, eagerly amplified by the pet industry, has given a boost to the relatively new academic field of canine cognition, with research centers sprouting up on campuses across the country. In the fall, the journal Current Directions in Psychological Science devoted an issue to the topic.

At Yale, the three-year-old canine cognition center has been barraged by humans eager to have their dogs’ intelligence evaluated, volunteering them for research exercises and puzzles. Some owners drive for hours.

“People like their kids to be smart, and they like their dogs to be smart,” said Laurie Santos, a professor of psychology who directs the center. “Some people will call and sound apologetic, saying, ‘I’d like to bring my dog in, but he might be too dumb.’”

(By the way, here’s a bubble-bursting secret: Smart dogs often aren’t that great to live with, precisely because they’re too smart.)

But when owners use “smart” and “dog” in the same sentence, what exactly do they mean? Smart compared with what? A cat? Another dog? A human?

Scientists define and measure a dog’s smarts differently from the way owners do. Over a decade ago, evolutionary anthropologists realized that in the dog, whose development has been so strongly shaped by humans, they had a star subject to observe. Unlike gorillas, dogs are fairly inexpensive to study — their numbers are plentiful, their room and board happily covered by owners. 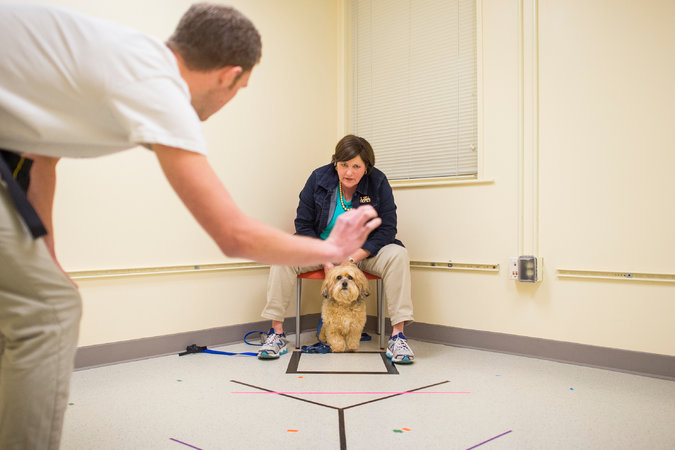 Now some researchers are studying the dog’s brain. Others are trying to identify the dog’s cognitive abilities, debating about the extent to which dogs may be unique among animals. Comparative psychologists are looking at how those capacities stack up against those of children.

Experts agree that when owners discuss how smart their dogs are, they are imposing a human construct on an animal. A dog may seem “smarter” to its owner than the neighbor’s dog, but even the popular notion derived from some studies — that dogs are as intelligent as toddlers — is, practically speaking, meaningless.

Many animal behaviorists say that what people really mean when they call a dog smart is that the dog is highly trainable.

“People think dogs are more intelligent than cats because they obey,” said Frans de Waal, a biologist and primatologist at Emory University in Atlanta. “But it’s not the same thing.”

Dogs have lived in intimate proximity with people for some 30,000 years, evolving along the way to pick up human cues and training us to feel obliged to feed and house them. As survival instincts go, that is pretty smart.

Canine cognition research is underway on campuses from Berkeley to Barnard, and at universities in England, Hungary and Japan. The field’s growth has coincided with a shift in how dog owners view their animals.

“This is the logical consequence of the ‘humanization of pets’ trend,” said Hal Herzog, an anthrozoologist and emeritus professor of psychology at Western Carolina University in Cullowhee, N.C. Indeed, owners are often referred to as pet parents.

Like human parents who bought Baby Einstein CDs, hoping to enhance the intelligence of offspring even in utero, many pet owners succumb to gadgets advertised as enhancing their dog’s brain function. (See: IQ Treat Ball.)

“What parent doesn’t want their child to have the best cognitive stimuli you can give?” said David Lummis, senior pet market analyst with Packaged Facts, a market research firm. “Guilt is a big part of it.”

But as some pet parents discover, a smart dog can seem less like an adorable toddler than a know-it-all teenager.

Though enthusiasm for canine research is fevered, funding can be hard to come by. Recently, some researchers have locked arms with commerce, to attract so-called citizen scientists (a.k.a. dog owners) to help collect data.

Adam Miklosi, a prominent Hungarian canine behavioral researcher, plans to connect scientists with pet owners who can gather information about their dogs’ habits. His venture, SensDog, uses an iPhone app to communicate with Apple Watch sensors in the animal’s collar.

Then there’s Dognition, whose website professes to “Find the Genius in Your Dog.” It’s a project led by Brian Hare of Duke University’s Canine Cognition Center in partnership with Purina Pro Plan’s Bright Minds line of dog foods. For $19, owners receive a questionnaire and video instructions to gather information about their dog and submit the data on Dognition’s website. Dognition then sends back a cognitive profile of the pet, especially in comparison with other dogs. More than 25,000 owners have submitted data so far.

Of course, we are still generally talking about dogs as a species. While stereotypes of breeds are deeply rooted, Dr. Hare said, there is no evidence to show that one breed is cognitively superior to another. But in 1999, Stanley Coren, now an emeritus psychologist at the University of British Columbia, produced a list of 110 breeds ranked by intelligence, based on his survey of some 200 professional dog-obedience judges. The top three: Border collie, then poodle followed by German shepherd.

“Giorgio is one-third poodle, so he’s really smart a third of the time,” Ms. Giordano asserted.

(Skulking down at the bottom of the list: bulldog, Basenji, Afghan hound. If it is any consolation, Dr. Hare said scientists did not consider surveys to be definitive proof.)

Certain dogs excel at tasks for which they have been bred for centuries. Bloodhounds have an astonishing sense of smell. Australian shepherds can keep a flock of sheep together as skillfully as a nursery school teacher with a playground full of 3-year-olds.

And, distinctively, dogs seem to trust us for problem-solving help. When they are flummoxed (for example, the rubber ball become stuck under a bed, the kitchen door shuts), they turn to their humans, yipping, pawing, gazing dolefully. A wolf reared by a human, by contrast, will just keep trying to solve the problem on its own.

But intelligence per se may not be the trait that truly sets dogs apart, at least in human-animal interaction, researchers say.

“There is something remarkable about dogs,” said Dr. Wynne, who is studying how to train dogs to sniff for bomb-making ingredients. “They have this kind of open hyper-sociability. The dog itself wants to give out love.

“I think ‘smarts’ is a red herring,” he continued. “What we really need in our dogs is affection. My own dog is an idiot, but she’s a lovable idiot.”

Dr. Hare, who is an associate professor of evolutionary anthropology at Duke, said he believed that dogs, like humans, had multiple types of intelligence. With Dognition, owners test their dogs in areas of empathy, communication, cunning, memory and reasoning.

Dr. Santos of Yale agrees. “If you want to train an agility dog or a show dog, you value certain traits,” she said. “And if you have a stressful job and a family, you want a companion to cuddle. But they’re both ‘smart.’”

Chaser, a Border collie known for understanding over 1,000 words, is often labeled the smartest dog in the world. She had some intriguing results on Dognition, Dr. Hare said.

Researchers placed 10 items that Chaser could already identify in a pile with an unfamiliar one. Then they asked her to fetch the one that she had not yet learned. She did so correctly because she inferred it was the only object she did not recognize, researchers said. A week later, when asked to retrieve the same item, Chaser remembered.

On Dognition, in areas of inference and memory, Chaser unsurprisingly scored off the charts, Dr. Hare said.

But as for Chaser’s results in empathy and communication, qualities that owners do cherish in their dogs, Dr. Hare said the dog was “totally uninteresting.”

Still, while Dr. Hare endorses a complex view of canine intelligence, he could not resist a one-upmanship jab familiar to parents, both of humans and pets, who yearn to place their progeny at top-tier universities.

“You know about grade inflation in the Ivies,” he said, noting that at Duke, “your dog has to come to our center at least four times to get an undergraduate degree.”

“But,” he added, “only once to get a certificate at Yale.”