Home Entertainment Pedro Almodóvar and His ‘Cinema of Women’

“I feel that I can tell a richer and more entertaining story with women,” Mr. Almodóvar said, his signature shock of thick white hair and mischievous eyes in full evidence during the interview at the Peninsula Hotel in Manhattan. He spoke softly and quickly, in a mixture of Spanish and English.

“I will write male and female characters,” he said, “but I do find at least in Spanish culture, women to be more vivacious, more direct, more expressive, with a lot less of a sense of being fearful of making a fool of themselves.” 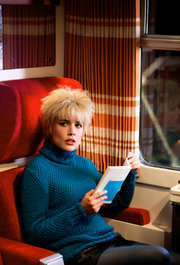 La Frances Hui, associate curator in the film department at the Modern, said: “Almodóvar is someone who is very beloved by female actresses. He has an unusual ability to observe women with a real sense of empathy. He is able to highlight their emotions and their strengths, and he is often very funny. He shows women in a very different way than we usually see in cinema. The films that a director makes are a reflection of himself, and this is how he sees women.”

Conversely, Mr. Almodóvar often finds male characters limited. “I think that until very recently men in Spanish culture were quite corseted,” he said, with roles restricted to the Latin lover, the macho hero or the man of the house. “It’s taken quite a while to come to a point now where we can find different facets in male characters. Men are kind of the protagonist of epic stories, but really what I’m more interested in are stories that deal with the ordinary, with the every day.”

“Julieta,” which also stars Emma Suárez as the older version of the title character, centers on one such everyday relationship, that of a mother and daughter. With movies like “High Heels” (1991) and “All About My Mother” (1999), maternity is a familiar theme for Mr. Almodóvar. And it is perhaps fitting that his 20th returns to it.

“I was lucky to meet his mother when she was alive, and it helped me to understand a lot the way he is and the fascination he has for women and how well he knows women,” said Penélope Cruz, who has appeared in five of his movies. “He was raised by his mother and her sisters and neighbors, with a lot of women together. It’s a little bit of what you see in ‘Volver’” — his 2006 film about a family of women and a matriarch who reappears as a ghost — “and he was always watching and observing.”

She likened it to her own childhood in her mother’s hair salon, observing customers and stylists. “It was so inspiring watching them interact, what they were saying, what they were not saying,” she said. “The fascination with the female universe, he’s constantly paying homage to that.”

Mr. Almodóvar, too, was watching his mother, Francisca Caballero, who died in 1999, as he grew up in the La Mancha region of Spain and agreed that many of his characters were inspired by her. “She had the capacity to fake things, fake things in order to solve problems,” he said, explaining that as opposed to the men in his family, the women “would resolve situations with the greatest naturalism, with the greatest ease, they would just fake that certain things were happening in order to protect us as children, and they did it with the greatest conviction.”

He added, “Life is filled with these miniature plays, scenarios, where people are forced to act or fake, and women are naturally born actresses.”

Women have helped him to grow cinematically, too. Mr. Almodóvar said it was Carmen Maura, one of his first muses, who pushed him to make the jump to 16-millimeter film, from Super-8. Another actress, Rossy de Palma, who met Mr. Almodóvar in Madrid in the early ’80s and became a lifelong collaborator, said she and others in the Madrid art scene influenced and encouraged him.

“Initially, Pedro was having fun, passionate, but he didn’t have a strategy,” Ms. de Palma said. “It wasn’t calculated. He became like a fountain, something we could not stop.”

Living in Madrid after the Spanish ruler Franco died, in 1975, Mr. Almodóvar said, affected his view of women, too. “Women in the ’80s were much more willing to take risks than the women now, and maybe it had to do with the fact that the women at that time were becoming emancipated” from any kind of control and expressing their sexuality, he said. “Women today are not facing the same historical moment and so their attitudes are very different, but maybe that will change.”

Ms. Maura and Ms. de Palma appear again and again in Mr. Almodóvar’s films, and watching them age through his movies adds poignancy and depth to his portrayal of women.

Unlike many in Hollywood, Mr. Almodóvar’s appreciations of female beauty aren’t restricted to younger women. “It’s much more deep,” Ms. de Palma said. “Beauty is in the eye. It’s in the eye you live through, and go through life. The way you look becomes different. In ‘Julieta,’ you see younger, older and all the women are celebrated.”

Marisa Paredes, now 70, has worked with Mr. Almodóvar throughout her career. And each time her character’s age was adapted to reflect her own, whether it was “Dark Habits” (1983), in which she played an eccentric nun or the 2011 thriller “The Skin I Live In,” in which she was the a housekeeper for a twisted plastic surgeon. “He never pretends to do something else,” Ms. Paredes said. “If he wants an actress who is 40, that is the actress he looks for.”

Mr. Almodóvar explained that “I like working with people who are photogenic, which has nothing to do with how beautiful you are. The camera decides who it likes and who it rejects.” He offered contrasting examples: “Penélope is very well-treated by the camera, but at the same time I also adore Rossy de Palma, whose beauty is unbalanced in comparison.” Her face, he added, “is cinematic, expressive and beautiful.”

In the new drama, “Julieta,” beauty and aging are dominant themes, and Ms. Suárez, playing the older woman dealing with tragedy, said getting the specifics of her appearance right — the shade of blond hair, the sunglasses — is a hallmark of Mr. Almodóvar. “There’s a bookcase in the background in one shot, and you can be sure he’s gone through every single book and made sure every book is the right one.”

Ms. Suárez recalled a moment during the production of “Julieta” that epitomized his approach. “One time he took me to the set, and they were painting the walls of the house my character would move into, and he wanted to see if the color of my hair went with the light when it hit the paint on the wall in the room. And the opportunity to be able to work with and live with a filmmaker of this caliber, it’s something that feeds me as person and actress.

Long before he starts shooting, Mr. Almodóvar is just as specific about his actresses’ preparation. For “Julieta,” Mr. Almodóvar gave Ms. Suárez a copy of Joan Didion’s “The Year of Magical Thinking” for its focus on the pain of grief and abandonment, Ms. Suárez said. He also suggested she study the paintings of Lucian Freud, watch films by Louis Malle and Stephen Daldry, and study the work of actresses like Jeanne Moreau and Gena Rowlands.

All of these details help make the women he writes so vivid. “The character will tell me even if the shoes will be flat or high, and those tiny things are important for you to do the scene,” Ms. Cruz said. Several actresses mentioned his attention to the exact tone of their characters’ voices.

“He’s the director that gives the most notes,” said Elena Anaya (“The Skin I Live In”). “He tells you exactly what the character thinks, feels, wants, in every second.”

Ms. Suárez said that “you even begin to imagine how a character breathes,” adding, “It’s actually quite exhausting, because you arrive at your home after a day of shooting, and you are empty, you’ve given everything, and he wants more.”

In the end, Ms. Suárez said: “He’s a man with a great sensitivity and with a tragic sense of life. I think women end up serving as a vehicle to express all these feelings for him.”