Senator Mitch McConnell of Kentucky, the majority leader, gamely pressed forward on Tuesday even as the ground was giving way beneath him.

“I regret that the effort to repeal and immediately replace the failures of Obamacare will not be successful,” Mr. McConnell said on the Senate floor on Tuesday morning. “That doesn’t mean we should give up. We will now try a different way to bring the American people relief from Obamacare. I think we owe them at least that much.”

On Capitol Hill, Republicans and Democrats alike were trying to make sense of the bill’s downfall — and what comes next. On Monday night, two Republican senators, Mike Lee of Utah and Jerry Moran of Kansas, came out in opposition to the bill, leaving Republican leaders at least two votes short of those needed to start debate on the measure. 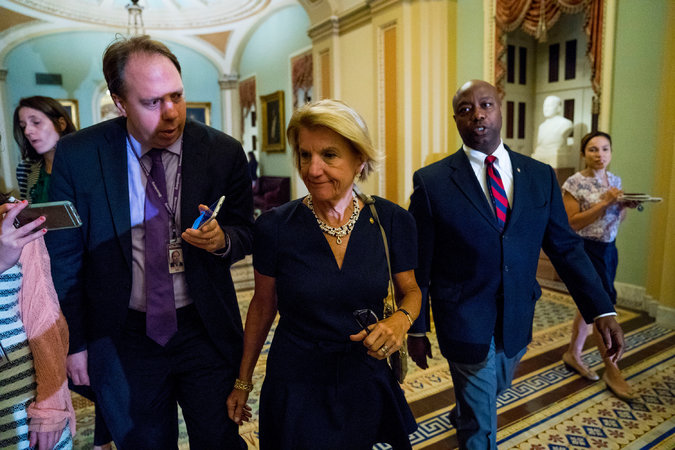 Senator Shelley Moore Capito, center, Republican of West Virginia, said she was opposed to simply repealing the Affordable Care Act without a replacement.

Two other Republican senators, Ms. Collins and Rand Paul of Kentucky, affirmed their opposition to the measure last week, leaving Mr. McConnell with no room for error as he tried to move toward a vote.

Speaking on the Senate floor on Tuesday morning, Mr. McConnell laid out plans for a vote on a measure like the one vetoed by Mr. Obama in January 2016, which, Mr. McConnell said, would include a “repeal of Obamacare combined with a stable, two-year transition period.”

Under that bill, the Congressional Budget Office said, 18 million more people would be uninsured within a year, and 32 million fewer people would have coverage in 2026, compared with current law. Premiums, it said, would increase at least 20 percent in the first year and would double by 2026.

That bill would have eliminated the Affordable Care Act’s expansion of Medicaid and subsidies for the purchase of private insurance. But it would have left in place rules established by the Affordable Care Act that require insurers to provide specific benefits and prohibit insurers from denying coverage or charging higher premiums because of a person’s pre-existing medical conditions.

“There’s enough chaos and uncertainty already, and this would just contribute to it,” she said.

They also spooked a bipartisan group of 11 governors, led by John R. Kasich of Ohio, a Republican, and John W. Hickenlooper of Colorado, a Democrat, and including Gov. Brian Sandoval of Nevada, a key opponent of the repeal effort.

“The Senate should immediately reject efforts to repeal the current system and replace sometime later,” said the group, which consists of five Republicans, five Democrats and one independent. “This could leave millions of Americans without coverage. The best next step is for both parties to come together and do what we can all agree on: fix our unstable insurance markets.”

The statement was endorsed by the governors of Alaska, Louisiana, Maryland, Massachusetts, Montana, Nevada, Pennsylvania, Vermont and Virginia.

Republican leaders in Congress originally intended to proceed with a similar “repeal and delay” strategy in January. But Mr. Trump, among others, insisted that the repeal and replacement of the law be simultaneous.

It was unclear whether Mr. McConnell would even be able to clear a procedural hurdle to get to a vote on the repeal-only measure. He faced the same math problem as with his own bill: He can afford to lose only two Republican senators, with Vice President Mike Pence breaking the tie.

Not only has he apparently lost three, Senators Collins, Murkowski and Capito, but he must wait for the return of an ailing Senator John McCain, Republican of Arizona.

Ms. Collins said she would vote against the procedural step.

“I do not think that it’s constructive to repeal a law that is so interwoven within our health care system without having a replacement plan in place,” she said. “We can’t just hope that we will pass a replacement within the next two years. Repealing without a replacement would create great uncertainty for individuals who rely on the ACA and cause further turmoil in the insurance markets.”

Mr. Portman all but joined her.

“If it is a bill that simply repeals,” Mr. Portman said, “I believe that will add to more uncertainty, and the potential for Ohioans to pay even higher premiums, higher deductibles.”

The Senate Democratic leader, Chuck Schumer of New York, invited Republicans to work with Democrats to improve the health law. He warned that passing a repeal-only measure “would be a disaster,” saying it would cause millions of people to lose coverage and, in many ways, would be worse than Mr. McConnell’s original bill.

“It’s like if our health care system was a patient who came in and needed some medicine,” Mr. Schumer said. “The Republicans proposed surgery. The operation was a failure. Now Republicans are proposing a second surgery that will surely kill the patient.”