Home Entertainment Pop, Rock and Jazz in NYC This Week

SLOWDIVE at Brooklyn Steel (May 9, 8 p.m.). In the 1990s, the rock quintet Slowdive pioneered that era’s shoegaze sound, alongside its peers My Bloody Valentine and Ride. But after releasing the critically hailed album “Pygmalion” in 1995, the group went on a hiatus. After 22 years, that creative break comes to an end on Friday with the release of “Slowdive,” which offers a more polished take on the band’s trademark hazy vocals and reverb-dunked guitars. With Japanese Breakfast.
bowerypresents.com/brooklyn-steel

OMAR SOULEYMAN at Le Poisson Rouge (May 11, 8 p.m.). Omar Souleyman was a popular wedding singer in his home country of Syria until civil war broke out there, forcing him to flee to Turkey in 2011. But that has not stopped his career; in fact, his audience has only grown thanks to his kinetic and buzzing take on traditional dabke music, which Mr. Souleyman and his band modernize with synthesizers and electric ouds. Next month, Mr. Souleyman will release a new album, “To Syria, With Love,” which he has described as an ode to his native country — and one that is devoid of politics.
212-505-3474, lpr.com

BARBRA STREISAND at Barclays Center (May 6, 8 p.m.). After her rousing concerts at Barclays Center last summer, Barbra Streisand is enjoying a victory lap in her native Brooklyn with this one-night-only engagement. As ever, the Grammy- and Oscar-winning Ms. Streisand, 75, will deliver a show of titanic proportions, with selections that include “The Way We Were,” “Evergreen” and “Don’t Rain on My Parade.” She will also pepper the set with funny and revealing anecdotes from her remarkable career. And don’t be surprised if special guests like Jamie Foxx drop in to recreate some of the duets featured on “Encore,” Ms. Streisand’s 35th studio album.
800-745-3000, barclayscenter.com 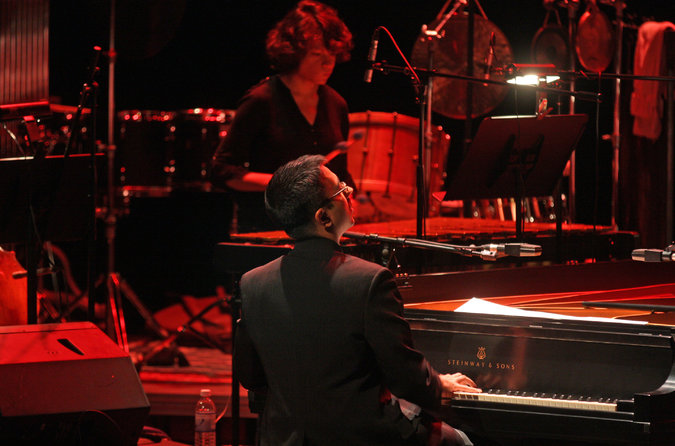 The pianist Vijay Iyer (above, with Patricia Franceschy) will take his trio to the Village Vanguard next week for the first time.

THE BAD PLUS at Jazz Standard (May 9-14, 7:30 and 9:30 p.m.). Thanks to its group chemistry (slyly combustible) and repertoire (dissected pop tunes; slap-happy original compositions), the Bad Plus has for nearly two decades been one of improvised music’s most reliable entities. But last month the band announced that Ethan Iverson, its pianist and de facto figurehead, would leave the group in January, to be replaced by Orrin Evans. These shows are the band’s first in New York since the news broke.
212-576-2232, jazzstandard.com

EVA CORTÉS at ShapeShifter Lab (May 5, 7 p.m.). The Honduran vocalist Eva Cortés grew up in Spain, lived for a time in Paris, and recently relocated to New York City. She performs ballads and love songs from around the Americas with restraint and real intimacy. It’s romantic jazz singing that doesn’t demand an abundance of suspended disbelief. She plays here in support of a new album, “Crossing Borders,” which mixes classic repertory with original compositions and features an expert band. Five of those musicians appear here: Doug Beavers on trombone, Marvin Sewell on guitar, Jon Cowherd on piano, Luques Curtis on bass and Robby Ameen on drums.
646-820-9452, shapeshifterlab.com

HARRIS EISENSTADT at Greenwich House Music School (May 6, 8 p.m.). Mr. Eisenstadt, a drummer, tends to write music with a steady rhythmic pulse and a feeling of open-air possibility. On “Recent Developments,” his 20th album, the compositions are detailed and multifaceted, but nothing feels nailed down or tightened up. His way of playing helps: Mr. Eisenstadt’s touch is emphatic but light, never aiming to fill a lot of space. He plays here with a nine-piece band that’s almost identical to the one on the record: Nate Wooley on trumpet, Jeb Bishop on trombone, Rubin Kodheli on cello, Anna Webber on flute, Sara Schoenbeck on bassoon, Joe Daley on tuba, Patricia Brennan on vibraphone and Eivind Opsvik on bass.
212-242-4770, greenwichhouse.org

VIJAY IYER TRIO at the Village Vanguard (May 9-14, 8:30 and 10:30 p.m.). The pianist, MacArthur fellow and Harvard professor Vijay Iyer has been performing steadily with his trio for about a decade. The group’s urgent flow and turbid harmonic beauty have made it one of the few obvious answers to the question, “What’s exciting in jazz today?” But astonishingly, it has never before played the Village Vanguard, a rite of passage in the music. Appearing here with Mr. Iyer, in twice-nightly performances Tuesday through May 14, are the bassist Stephan Crump and the drummer Tyshawn Sorey (who does not typically record with the trio, but will play in a sextet on Mr. Iyer’s next album).
212-255-4037, villagevanguard.com

JOHN SCOFIELD RETROSPECTIVE at Jazz at Lincoln Center (May 5-6; 7 and 9:30 p.m.). Mr. Scofield, a guitarist, has a tartly confectionary sound that’s both bendy and biting. It’s served him well over a four-decade career, and it won him three Grammys in the past two years. For these weekend shows, he’s borrowing a strategy from his dad-rock contemporaries: He will revisit two old albums, the funky “Blue Matter,” from 1987, and the drifting, acoustic “Quiet,” from 1996. For the “Blue Matter” repertoire he’ll be joined by the bassist Gary Grainger and the drummer Dennis Chambers — both of whom appeared on the album — and the pianist Jim Beard. For “Quiet,” he’ll convene a large ensemble featuring six reed and horn players, including the tenor saxophonist Joe Lovano.
212-721-6500, jazz.org

YOSVANY TERRY at Brooklyn Center for the Performing Arts (May 6, 8 p.m.). The alto saxophonist Yosvany Terry blends twisty contemporary jazz with buoyant Cuban folklore, sacrificing little along the way. His most recent album, the remarkable “New Throned King,” layers his smooth and threadlike saxophone playing over cantos and rhythmic patterns from the Arara people of western Cuba. Mr. Terry, who also teaches at Harvard, appears here with his Afro-Cuban Sextet.
718-951-4500, brooklyncenter.org

JOHN ZORN’S GAME PIECES at Roulette (May 6, 8 p.m.). Each of Mr. Zorn’s game pieces begins as a series of guiding cues and rules written on cards. They end as high-contrast splays of sound, ranging from melodic solo statements to coordinated wallops. Mr. Zorn, a saxophonist and seminal figure on New York’s improvising avant-garde, has staged “Cobra” and “Hockey” — the game pieces presented here — many times through the years. “Cobra” uses a large ensemble; “Hockey” will feature only Michael Nicolas on cello and Aaron Edgcomb on percussion, with Mr. Zorn conducting.
917-267-0368, roulette.org

A pop music entry on the Listings pages on Friday about the Syrian vocalist Omar Souleyman misstated when his new album would be released. The album, “To Syria, With Love,” will come out on June 2, not this month.