Home Entertainment Pop, Rock and Jazz in NYC This Week

KHALID at East River Park (Aug. 12, 5 p.m.). One of the biggest success stories from the past year in music is that of Khalid, the 19-year-old singer-songwriter whose irresistible single “Location” was recently certified double platinum. He easily sold out two nights next week at the cavernous Terminal 5 in Midtown Manhattan, but fortunately for fans who missed out on those tickets, he is also performing at this free outdoor show on Saturday.
cityparksfoundation.org

ZESHAN B at Mercury Lounge (Aug. 11, 11 p.m.). The Chicago-born singer Zeshan B has a fine tenor voice that recalls Sam Cooke, and a taste for refined retro arrangements akin to those favored by Leon Bridges. His debut album, “Vetted,” seeks out commonalities between classic soul covers (William Bell’s “You Don’t Miss Your Water”) and the Indian and Pakistani music he learned from his immigrant parents. It’s a rewarding blend of sounds and sensibilities, which Zeshan B will explore further at this late-night show.
212-260-4700, mercuryloungenyc.com 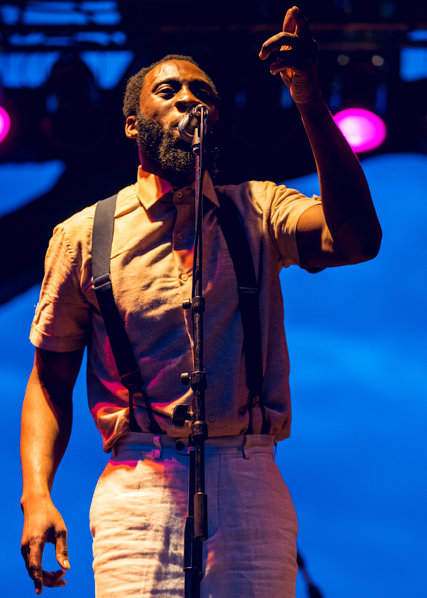 The singer Michael Mwenso has organized a three-part program of music of the African diaspora, scheduled for Tuesday evening at Le Poisson Rouge. See listing below.

AFRO YAQUI HONORS FRED HO at Ginny’s Supper Club (Aug. 11, 7:30 and 9:30 p.m.). The baritone saxophonist and composer Fred Ho had an unbounded approach to making music, which he treated as a necessarily revolutionary act. Mr. Ho, who died in 2014, learned at the elbow of the arranger Gil Evans and the saxophonist Archie Shepp, and possessed his own fearsome authority as an improviser. The music he wrote drew on mainstream jazz, the avant-garde, and traditional forms from both Africa and East Asia; it was aggressive and caustic, but also deeply engaging. Afro Yaqui is a group of nine musicians — including a few alumni of Mr. Ho’s ensembles — dedicated to furthering his musical legacy; at Ginny’s it will play pieces from his repertoire.
212-421-3821, ginnyssupperclub.com

KRIS DAVIS TRIO at the Stone at the New School (Aug. 11-12, 8:30 p.m.). The pianist Kris Davis plays in all kinds of scenarios, but it’s best to hear her with a trio, at most. She’s a cook who uses a lot of spice, mixes her cuisines, burns the dish on purpose: It’s a lot. Somehow everything comes out right; more than just coherent, her music is capable of inducing a state of wonder, bordering on attachment. You may not be ready for it when she starts playing, but you certainly won’t be prepared for the spell to break at the end. She performs at the New School with the bassist Eric Revis, a frequent associate, and the drum luminary Andrew Cyrille.
thestonenyc.com

‘MICHAEL MWENSO’S SACRED PROTEST SONGS: FROM AFRICA TO AMERICA’ at Le Poisson Rouge (Aug. 15, 7 p.m.). A fervid vocalist and full-bore entertainer, Mr. Mwenso has assembled a special three-part program for this concert. It’s devoted to music of uplift and self-determination from across the African diaspora. The pianist Sullivan Fortner, a member of Roy Hargrove’s quintet, will play a sampling of African-American spirituals; the South African vocalist Vuyo Sotashe will introduce audiences to songs he learned in the townships of his homeland; and Mr. Mwenso, who hails from Sierra Leone, will debut a selection of newly composed anthems aimed at inspiration.
212-505-3474, lpr.com

SIMONA PREMAZZI QUINTET at the Cell (Aug. 12, 8 p.m.). Ms. Premazzi, a pianist, writes melodies of rugged intensity but clear direction. Her voice as an improviser is just as engaging. With this gig she celebrates the release of her fine new album, “Outspoken.” Her band mates here are different from the personnel on the record, but about as enticing: Philip Dizack on trumpet, Mark Shim on tenor saxophone, Pablo Menares on bass and Kush Abadey on drums.
646-861-2253, thecelltheatre.org

TRIO DA PAZ AND FRIENDS at Dizzy’s Club Coca-Cola (Aug. 15-20 and 22-27, 7:30 and 9:30 p.m.). Trio Da Paz has been around for 31 years, and it’s held down a summer residency at Dizzy’s for the last 10. With Romero Lubambo on guitar, Nilson Matta on bass and Duduka Da Fonseca on drums, the group calls its music “samba jazz.” It’s not false advertising; the triumvirate is given to up-tempo excursions, high on friction — not the lilting bossa nova that you might expect from a Brazilian guitar trio. These comrades will find new angles of engagement over their two-week run, during which they will welcome various special guests on different nights, including the vocalist Maucha Adnet and the trumpeter Claudio Roditi.
212-258-9595, jazz.org/dizzys

MANUEL VALERA at the Jazz Gallery (Aug. 11, 7:30 and 9:30 p.m.). A Cuban-American pianist with plenty to say — and a full schedule of sideman gigs — Mr. Valera is often relentless and blistering at the keyboard, but a shape-shifting melodicism is embedded in everything he plays. Here he debuts a newly commissioned work, “The Planets,” accompanied by a powerful trio: Hans Glawischnig on bass and E. J. Strickland on drums.
646-494-3625, jazzgallery.nyc