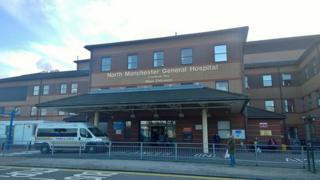 Hospital staff left a premature baby “in a sluice room to die alone” and misdiagnosed a mother who died from a “catastrophic haemorrhage” in two separate cases, a report has revealed.

The trust said it had apologised to the families involved for “any failings”.

Ryan Jackson, who campaigns for better baby care after his daughter Lily Mae was stillborn in 2010, said it was the “most shocking case” he had come across.

Mr Jackson, 34, director of the Lily Mae Foundation, said: “Even though born so premature, this baby is still someone’s child.

“For your baby to be treated in such an inhumane way is devastating.

“Parents trust that a hospital is going to give their baby the best care, not treat them like this.

“This is so wrong on so many levels.”

The Labour MP told the BBC: “I am barely able to read the report without crying – with the baby being left to die alone.

“It is the most shocking report.

“I think staff attitudes are improving under special measures at Pennine but to give confidence to pregnant women, they can’t do that by being secretive.”

The review, which was carried out in June, followed critical reports by the Care Quality Commission which saw both North Manchester General Hospital and Royal Oldham Hospital rated as inadequate in February.

The document described how a premature baby had arrived “just before the legal age of viability” – at 22 weeks and six days – but staff did not find “a quiet place” for the child’s mother “to nurse her as she died and instead placed her in a Moses basket and left her in the sluice room to die alone”.

It also condemned staff attitudes which led to “unacceptable situations”, including another mother’s “increasing deterioration” being wrongly attributed to mental health issues – a misdiagnosis which saw her eventually die “from catastrophic haemorrhage”.

The report did not specify which of the two hospitals these incidents took place at.

Other cases included a baby dying because a mother’s rare blood type was not identified and a woman needing a colostomy because her condition was missed three times.

The Manchester Evening News was made aware of the review in July by a whistleblower and subsequently battled for three months with the trust to publish the findings.

It also highlighted high compensation payouts for death and injuries.

The trust’s medical director, Prof Matthew Makin, said the review was carried out to “fully understand the issues and problems affecting services” and work out “what urgent action needed to be taken”.

He said all reported incidents had been “investigated thoroughly” and families had met the trust’s head of midwifery to offer apologies for “any failings in care and to discuss the changes that have been made”.

He added the trust was now addressing the issues “through increased investment, improved staffing, focused training and the appointment of a new leadership team”.