“It wasn’t like I had visions of, ‘Oh, this is going to be magical because it’s not hard,’” she said of her idea to start Madison Reed. “Running a company or starting a company, it’s really hard.” 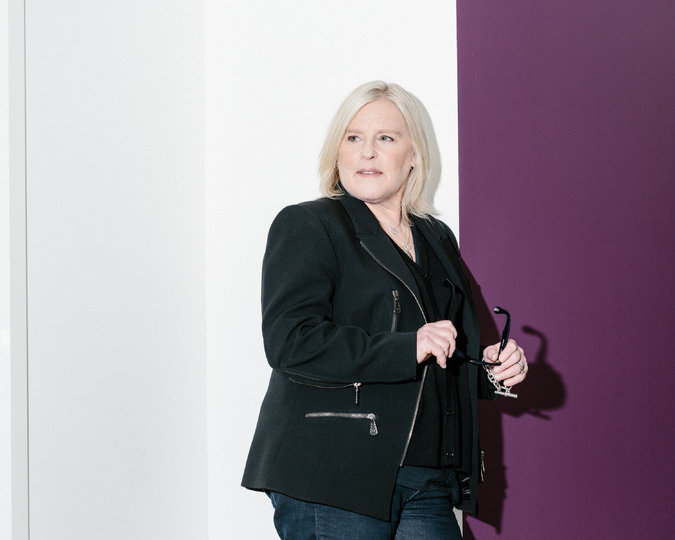 Ms. Errett, the chief executive of Madison Reed, was a venture capitalist before starting her hair-color company.

Thoughts of a return to entrepreneurship began to percolate several years into Ms. Errett’s tenure as a venture capitalist, so she began looking for business ideas. Around the same time, she grew concerned about the harsh hair-coloring chemicals her wife, Clare, was handling during twice-monthly touch-ups.

At dinner parties in their home, she began asking her guests the awkward question, “Hey, do you dye your hair?” And, “Do you know what’s in your hair color?”

The answer to the second question was invariably no. And even though the emotional stakes can be high with hair-color expenditures — a botched dye job is more likely to provoke tears than, say, an unsightly pair of shoes — many of her respondents weren’t quite sure what brand they were using.

The United States hair-coloring market is dominated by L’Oréal (25 percent) and Clairol (17 percent), according to the market research firm Statista.

Ms. Errett continued her informal research by observing 53 friends and acquaintances apply their own hair dye. She said she witnessed “all the mistakes and all the emotion” involved in the process, and she concluded that the industry was stagnant in terms of the products, distribution channels and the technology used.

As a venture capitalist, Ms. Errett used three criteria to assess potential investments in early-stage companies: She looked for a strong team, a sizable market and a compelling, unique quality to the business. “Why would somebody buy your stuff versus somebody else’s?” as she put it.

Ms. Errett used this lens to evaluate her own business idea, Madison Reed.

On the first point, she was confident in herself as a leader and in her ability to put together a team. Regarding market size, hair color is “massive,” she said. The global hair-color industry will reach just over $29 billion by 2019, helped along, in part, by a rise in male grooming, according to the market research firm Technavio. She also believed she could make a better product.

About 56 million Americans dye their hair at home, and many opt for touch-ups or full dye jobs every two to six weeks. Like razors, home hair color is what Ms. Errett calls a repetitive usage product.

“It’s embedded in the business model for a person to come back,” she said.

This combination was the clincher for Ms. Errett — and for the investors she went on to attract. So far, Madison Reed, which is based in San Francisco, has raised $45.1 million in funding, predominantly from venture capitalists.

Even though entrepreneurs are often drawn to venture capital, the skills for the two fields are not interchangeable. Entrepreneurs tend to have tunnel vision, concentrating on their business without keeping abreast of broader industry trends, said Mr. Crowe, himself a former entrepreneur. “You’re just so focused on executing what you and your team are doing.”

Venture capitalists, on the other hand, must immerse themselves in industry trends and engage in strategic thinking about competitors and new business models.

That Ms. Errett had experience as a venture capitalist and as an entrepreneur helped convince Mr. Crowe to invest in Madison Reed. “I thought it would make her even more effective,” he said.

Madison Reed is still a relatively small start-up competing against large, deep-pocketed companies. L’Oréal and Clairol both have decades of name recognition, ample budgets to hire models and actresses to help promote their brands, and vast manufacturing capabilities. Several years ago, L’Oréal spent $100 million to build the world’s largest hair-color factory, in Mexico.

One way Madison Reed competes is by offering personalized hair color and primarily selling it directly to consumers, rather than through stores or salons. Ninety percent of people who use Madison Reed products buy them from the company, while 10 percent go through Sephora, QVC and Ulta Beauty stores.

It also puts a strong emphasis on technology. Ms. Errett hired a crew of “rock star technologists,” as she describes them, to help improve the experience of dying hair at home, including devising an algorithm whereby customers answer 12 questions about their hair to find the right color. And because she hoped to appeal to women who wanted a product with more natural ingredients, such as argan oil and ginseng root extract, and fewer harsh chemicals, Ms. Errett contracted out the manufacturing to a facility in Italy, where restrictions on chemicals in hair dye are more stringent than in the United States. She hired an in-house master colorist to develop the shades of color, each of which was tested on real hair before going into production. Being able to use a contract manufacturer also meant Madison Reed required less start-up capital.

Last fall, the technologists also built a tool through which customers submit selfies of their hair for color-matching. The customer sends a photo by text message or through Facebook Messenger; the algorithm analyzes the hair and selects the best Madison Reed color. A call center staffed by licensed colorists helps fine-tune the color-matching process and fields questions.

In December, Madison Reed opened a store in Manhattan where people can get color touch-ups. A 45-minute treatment costs $45. A box of Madison Reed hair color sells for $25 on the company’s website. It also sells hair gloss, root touch-up powder, shampoo and conditioner.

Some salons are using the product — a development that took Ms. Errett by surprise. Alex Chases Salon, with branches in California at San Francisco and Menlo Park, is among them. “I use it on heads of state, dignitaries, royalty, fashion icons,” Mr. Chases said.