For those who believe the primary goal of the law was to make Americans healthier, the answer has to be: It is too soon to tell.

One thing is clear, though — the Affordable Care Act has shifted the nation’s baseline expectations for how health care should work. Its successes have pushed Republican politicians, like Mr. Trump, into making expansive promises to provide insurance to all Americans. Its failures have become focal points, too, leading to calls for lower insurance deductibles and for more choices in doctors and hospitals.

With the law on the precipice of repeal, public opinion has suddenly tipped in its favor. For lots of people, “Obamacare” has become synonymous with the health care system itself, with its many miracles and dysfunctions.

There are layers beneath each judgment, of course. The law was broad and complex, with many goals and provisions. This assessment touches on its largest achievements and its biggest disappointments. For many important questions, there is not yet strong evidence either way.

Providing health coverage to the uninsured was Obamacare’s principal goal, and on that measure, it has succeeded. The gain of 20 million insured, based on an Obama administration estimate last year, is probably now even higher.

Not everyone shares the goal of expanded health coverage, and some of those newly insured bristle under an “individual mandate” to have insurance or pay a fine. Still, many of the newly insured could not have afforded insurance before the law passed or would have been shut out because of pre-existing health conditions.

The rapid reduction in the number of uninsured Americans has shifted the political debate about health reform. In 2009, many Republicans were comfortable with a status quo in which many Americans couldn’t get health care. Now, Mr. Trump and Republican leaders in Congress have vowed that their plans will cover as many people as the Affordable Care Act.

Obamacare More Popular Than Ever, Now That It May Be Repealed

At least four recent polls show that public opinion on Obamacare is tipping in its favor. 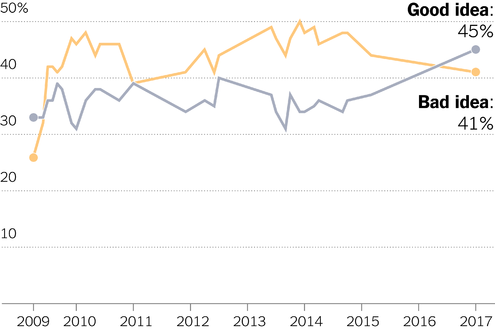 
It has made many Americans more financially secure.

Health insurance is supposed to provide access to health care, but it is also a financial product, intended to protect people from catastrophic bills if they are sick or injured. It is still early to measure the health law’s full impact, but several studies have found that low-income Americans have become less vulnerable to health-related financial shocks. Studies have found that fewer people struggled with medical bills or avoided medical care because of cost, and that medical debt and bills in collections have declined.

It has reduced inequality.

In an era of growing income and wealth inequality, Obamacare was a starkly redistributive law. Not only did it subsidize health insurance for those with low and middle incomes, but it also raised taxes on high earners. This mix of policies made the law controversial, but it also furthered the Obama administration’s goals of narrowing the gap between rich and poor Americans.

It made health insurance more comprehensive.

Before Obamacare, many products could be called “health insurance.” Now, health plans are required to cover services like maternity care and treatment for drug addiction, and they can’t cap how much they will pay in a given year. Many of the law’s critics dislike its numerous coverage mandates, but the new rules have increased patients’ access to services like mental health counseling, contraception and cancer screenings.

It lowered the federal deficit.

Obamacare was devised with a mix of new spending and taxes, along with cuts to the federal Medicare program, so that it would save more than it cost. A recent forecast from the Congressional Budget Office estimates that, if left in place, the Affordable Care Act will continue to save federal dollars through at least 2025. (Recent legislation has made some small changes to the law’s tax provisions, but analysts at the Center for a Responsible Federal Budget ran the numbers again and found very little difference.)

Obamacare’s marketplaces and Medicaid expansion make health coverage a good deal for those near the poverty line, but those earning not much more still often struggle to pay health plan premiums, and face deductibles that are much higher than those seen in a typical employer health plan. In the law’s first three years, premiums were lower than expected and grew slowly. But prices shot up this year, causing financial shocks for buyers who don’t receive government help in paying their premiums. Several analysts believe the increases resulted from recent policy changes and too-low early pricing and may represent a one-time market correction. Insurers have also said that they have found the pool of Obamacare enrollees to be sicker and less predictable in their health care needs than expected. Some people who earn enough to qualify for meager or no subsidies find health care unaffordable.

President Obama has described the health law’s markets as being like a Kayak or an Amazon for health insurance. They’re not. Health insurance is easier to shop for now, but it remains a complicated and opaque product, and selecting the right health plan is often frustrating or impossible for Americans unsure of their health needs — or unable to decode jargon like “out-of-pocket maximum” or “in-network provider.” After picking their insurance, patients can still struggle to use it, and can get stuck with surprise bills or long negotiations with their insurance companies. 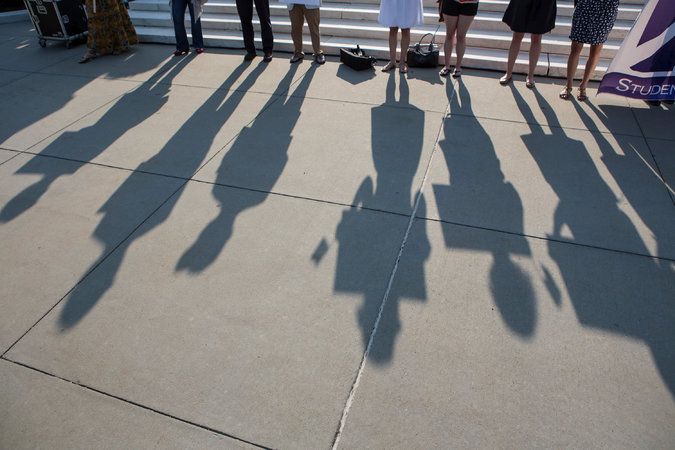 Ever since its passage, Obamacare has drawn both praise and protest, like this one by anti-abortion demonstrators outside the Supreme Court in June 2012.

In many parts of the country, only one insurer even offers health plans, limiting the choices available to consumers.

If you like your plan, you can’t always keep your plan. …

The Obamacare marketplaces are set up to encourage customers to frequently switch their health plans to avoid steep price increases. The markets have also been turbulent, with insurers going out of business, exiting markets or shifting around their offerings each year. That has led to a large fraction of renewing customers who change health plans every year, unable to pick a plan they like and stick with it.

Many Obamacare health plans, trying to keep prices competitive, have sharply limited the number of doctors or hospitals they will cover. Obamacare’s authors did not expect so-called narrow network plans to become so widespread. These have made it hard for some customers to find any plan that includes their favored providers, and means that switching plans often means switching doctors, too. The narrower networks, despite their inconveniences, have helped keep insurance prices lower.

Too soon to tell:

We don’t know if the law made America healthier.

Health insurance is not the same thing as health, and we still have very limited data about whether the law’s coverage expansion has lengthened lives or improved their quality in meaningful ways. There is some encouraging but very early evidence that low-income people in two states that expanded Medicaid reported improving overall health compared with their low-income neighbors in a state that did not. And there is research that more low-income Americans have visited a doctor and have received some basic preventive health services, including prescription contraceptives and treatments for diabetes.

But it will probably take many more years before it is clear whether the law has been beneficial to public health, or how large that effect may be. Even though the law allowed 20 million more people to get coverage, that’s a small fraction of the nation’s population, and it often takes years for health care services to result in measurable benefits.

It’s unclear what the law has done to national health spending.

A crucial goal for Mr. Obama was “bending the cost curve” and slowing the accelerating cost of health care in the United States. Growth in health spending has indeed slowed in the years since Obamacare’s passage, but it is hard to untangle the effects of the health law from other forces affecting health spending, including the Great Recession, rising insurance deductibles and a slowdown in the development of new medical technologies. The health law’s most ardent champions, including Mr. Obama, credit it for this change. But many economists are uncertain whether the slowdown is a result of the law or a mere coincidence.

It may have improved the quality of care in hospitals.

The health law contained many provisions intended to make medical care safer and more evidence-based. The health system is still often a dangerous place for patients, but fewer are contracting infections in the hospital, for example, or leaving the hospital only to be readmitted in a few weeks. Some trends were underway before the health law passed, so it is difficult to tease out how much change was caused by Obamacare or would have happened anyway.