Six years ago, I floated in the cerulean water at Tunnels Beach, on the north shore of Kauai, while pregnant with my older son, Felix, my sun-warmed belly poking above the waves as I took in the rippling red-and-green cliffs of the Na Pali Coast. Now I wanted Felix to feel that for himself, outside of me, fully aware of the cool water pulsing on his lanky 5-year-old body. Several months ago, my husband, Matt, and I began our sabbatical summer in Kauai, in the little north shore town of Haena. 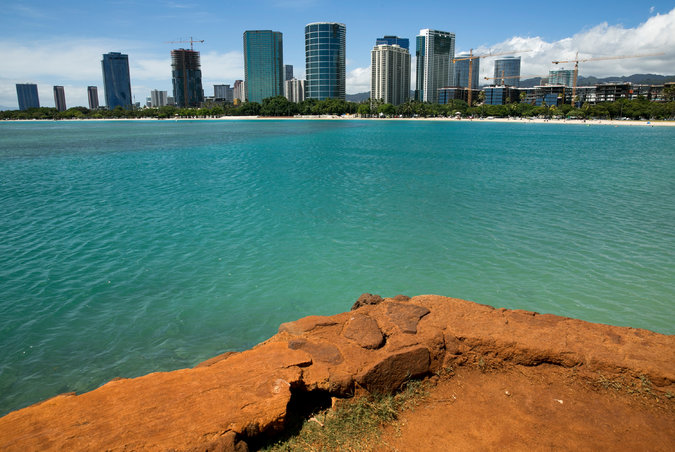 Ala Moana Beach Park in Honolulu.

Over three weeks there, we fell into a languorous but satisfying routine. Every morning we would head over from our rental house to Tunnels Beach, named for the distinctive underwater lava tubes — those long, cavelike tunnels and coral formations so beloved and frequented by divers who swim around and through them. It has a crescent-shape bay with coral reefs and a broad expanse of calm, waist-deep water ideal for snorkeling and swimming. We would go early and leave by noon, when the sun began to exert maximum scorch and the crowds grew thick. Felix was frightened of the sea at first, but little by little he got comfortable in the gently rolling surf.

What came, in quick succession, was curiosity and tentative exploration. He bobbed; he practiced his freestyle and his backstroke. He looked for brilliant pink-and-blue parrotfish. There was giddiness at swimming out to the reef; spontaneous underwater somersaults; leaps, with abandon, to bodysurf to the sand alongside the locals.

He loved the feeling that the water here was in some way alive, and different from the stillness of a pool. One day he befriended a 50-something bodysurfer named Dave, who shouted encouragement and expertly propelled himself toward shore with élan and grace. That evening, my son drew a picture of himself bodysurfing in the waves with his “new friend” Dave.

Perhaps there is a welcoming bonhomie we grant to the other swimmers who populate a spot. Everything else is stripped away, to leave the essential shared experience of the water.

The pleasures of swimming in a place can be everyday, routine, familiar. In 1779, a lieutenant of Capt. James Cook admired the native Hawaiians’ swimming abilities with an entry in his ship’s log: “The Women could swim off to the Ship, & continue half a day in the Water;” in Hawaiian, Polynesian and other enduring island cultures of the Pacific, men, women and children were all observed as being “almost amphibious” from birth.

This is as lovely and pure an image of the freewheeling freedom of swimmers as any I have come across. The tradition of the Hawaiian waterman is alive today, as residents grow up frolicking in the waves — surfing, swimming and paddling as a matter of course, learning the rules of the ocean. Local swim clubs lead guided ocean swims on the weekends to all comers, swims that are a mile and a half along the beach or to an offshore island. That kind of open-water education is the essence of a childhood in Hawaii. This idea takes hold every time I visit.

Every morning at Tunnels I swam a mile or more, zigzagging between reefs and following the locals to what they could show me. Once I tailed two spear fishermen, clad in their dusky-green camouflage wet suits, and spotted four large sea turtles resting 15 feet below at the bottom of the ocean, feasted on by tiny fish known as cleaner wrasse; in a marvel of symbiosis, the wrasse detailed their hard shells by Hoovering up parasites and dead skin. An efficient 45 minutes later, the young fishermen emerged from the sea with the day’s catch in hand: huge mahi-mahi, two each. On other days I swam alongside ropy-armed surfers as far as I could before they paddled beyond the outer reef, where the wind whipped whitecaps across the sea. I treaded water and watched safely from within the reef as they made elegant, sinuous turns across the face of each wave as it broke.

We became friendly with a young family who lived nearby and whom we saw often during those mornings. The toddler daughter liked to investigate our snacks and toys, and play with our 3-year-old son, Teddy. The father, nut-brown from the sun, sat in the shallows collecting tiny, intricately patterned shells the size of sesame seeds that he said were once collected only by the holiest of Hawaiian priests.

One morning as I was swimming in the coral-punctuated shallows, two men called my attention to a four-foot shark resting on its side in the waist-deep water. It was a juvenile, they said, and it had probably died while trying to find its way back to deeper water through the maze of vividly colored near-shore corals, some boulder-size, others cactuslike and still others resembling giant brains with lobes.

Later, a lifeguard in sunglasses and red swim trunks roared up in a dune buggy and dragged the shark onto the beach. Bystanders came around to stare at its smooth gray hide, bloodied nose and clouded-over eyes. The episode didn’t stop any of us from swimming. But it was a sobering reminder, welcome or not, of the ocean’s ever-present dangers: sharks, riptides, razor-sharp reefs.

These are risks that we swimmers are willing to take for the egalitarian joys that come from swimming in this ocean. Back in Honolulu, one of my favorite swimming spots is Ala Moana Beach along the downtown waterfront. In the middle of the city, steps from high-rise towers, the smooth, reef-protected ocean at Ala Moana serves as the de facto communal pool.

Everybody, and every body, is welcome. To swim there with the locals is to experience the place at fish-eye level: Turn your head makai or toward the ocean, to breathe, and there are surfers paddling out to the break; turn your head mauka or toward the mountains, and there are Japanese brides and grooms in white-columned gowns and trim dark suits having pictures taken on their wedding day. From this perspective, everything feels strangely possible: It is a swim through a flipbook of improbable vacation photos all stitched together.