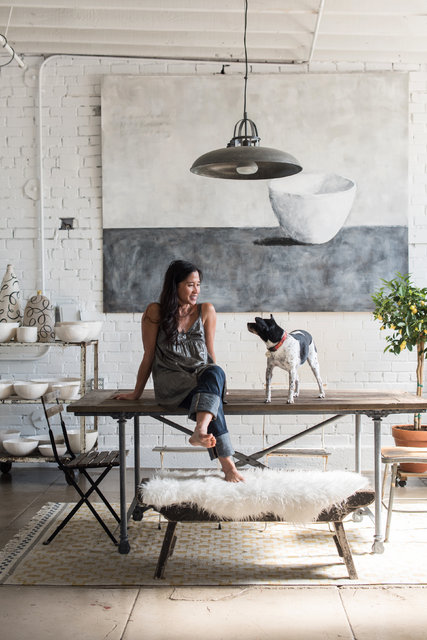 Over the last two decades, the ceramist Rae Dunn has attracted many admirers with her intentionally imperfect handmade pieces: pared-down tableware with subtle details, whimsical teapots, earthy vases with wobbly forms. So when she published her first book, “Wilma’s World” (Chronicle Books, $15.95), it was natural to expect that it would be about ceramics.

Instead, the book is filled with photos of Ms. Dunn’s Jack Russell terrier, Wilma, paired with bits of homespun advice: Wilma at a typewriter (“tell your story”); dressed as a cowboy (“get roped into new experiences”); looking alarmed at a pile of chewed-up plastic (“admit when you’re wrong”).

Ms. Dunn, 52, recently explained how the dog became a guiding figure in her life. (This interview has been edited and condensed.)

Q. How did Wilma come into your life?

A. It was my birthday, in 2005, and my boyfriend came and took me to see someone who had a litter of puppies in the backyard. He knew that I wanted a girl dog, and a brown, wiry-haired Jack Russell terrier, like the dog on “Frasier.” He had called the person ahead of time, and the man had put all the wiry-haired girls in one pen and the others in another pen.

I was looking though the pen of brown ones, and they were very rambunctious. Out of the corner of my eye, I saw in the next pen this black, smooth-coat dog just sitting there observing everything. She was very pensive and docile, and we just connected.

How did the photos begin?

When I took her home, she was smaller than a Beanie Baby. She was teeny. So of course I took a picture of her. She would sit there and look at the camera, very still, and just pose. So I started accumulating thousands of pictures of her, because she was so easy to photograph.

What did you see in the photos that suggested a book?

I never intended to do a book of Wilma. I started a blog for her, just because I had so many pictures. However, I had always wanted to write and illustrate a children’s book.

I started looking at the pictures of Wilma on my computer, because there are a million of them, and I thought maybe I could use photographs instead of illustrations. I printed out my favorite ones and was trying to make a story out of them. But the more I looked at them, the more I realized that each picture had its own message.

So it began as a book for children?

I thought it would be perfect for kids, because it would be life lessons from a dog. I made a mock-up and presented it to Chronicle Books. They liked it immediately but said: “This is not a children’s book. It’s a grown-up book.” Now I realize children already do all these things in the book. It’s grown-ups who need to be reminded to act more like children.

Why do you say that?

The world is so complicated these days, and there’s so much information coming at us, that it’s sensory overload. Wilma teaches me to see the world in a very simple, childlike way, and to home in on the details. People miss so much beauty in the world because they’re not observing. They’re just busy going from place to place, walking down the street and looking at their cellphones.

Are the photos a mix of candid and posed shots?

Ninety percent of the pictures were taken because I always have a camera, we’re always together and we just stumble upon things. We go to Vermont every summer, so there are a lot of shots from there — like there’s a tractor we found, and I just put her on it.

A few of them, where I wanted a message, I intentionally set it up. There’s one where she’s painting on the beach, and I posed her for that. There are also a few of her with costumes on. I would never buy a costume for her, but I have a friend in Hong Kong who sends me dog clothes because she thinks they’re funny, and I always take a picture.

Has Wilma influenced your ceramics?

Definitely, but it’s hard to explain. I’ve always been very simple and minimal, and Wilma is like that, too. I did a series of Wilma work that had big polka dots, because she has these amazing organic polka dots on her back. She’s my muse. She seems enlightened, and has definitely changed my life. A lot of people say that a dog takes on the personality of its owner; but with me, I want to take on her personality.

Is that why she’s listed as the book’s author?

She basically wrote the book. It’s what Wilma and I experience as we go through the world together. There’s one shot in there of her with a pair of eyeglasses that I found on the street, and it says, “Take a closer look.” That’s the main message. There’s so much beauty and inspiration if you just look and notice the small things in life.