Raymond Chikapa Enock Phiri was born on March 23, 1947, in what was then called the Eastern Transvaal of South Africa. He grew up near Nelspruit, an agricultural area in what is now the province of Mpumalanga.

His stepfather, who was from Malawi, played guitar but gave it up after losing three fingers in an accident. Mr. Phiri took that guitar and largely taught himself to play.

He moved to Johannesburg in 1967 to work as a musician.

Stimela grew out of a soul band Mr. Phiri founded in the 1970s, the Cannibals, which had a string of hit singles in South Africa. He and members of the Cannibals formed Stimela (the name means “steam train”) in the early ’80s. Mr. Phiri led the group, wrote songs, played guitar and often sang lead vocals.

Stimela merged the flexibility of jazz and the sleekness of R&B with the buoyant rhythms of South African styles like mbaqanga; its songs also recognized the tensions of living under apartheid. Its three-decade career as a top South African band began with its debut album, “Fire, Passion, Ecstasy,” released in 1984.

In the ’80s and early ’90s, Stimela’s music came up at times against the limits of what could be publicly expressed under apartheid. Some of its songs were banned from broadcast on the state-controlled radio station, SABC, notably “Whispers in the Deep,” which urged, “Speak your mind / Don’t be afraid.”

Despite the radio ban, the 1986 album containing that song, “Look, Listen and Decide,” became a best seller. 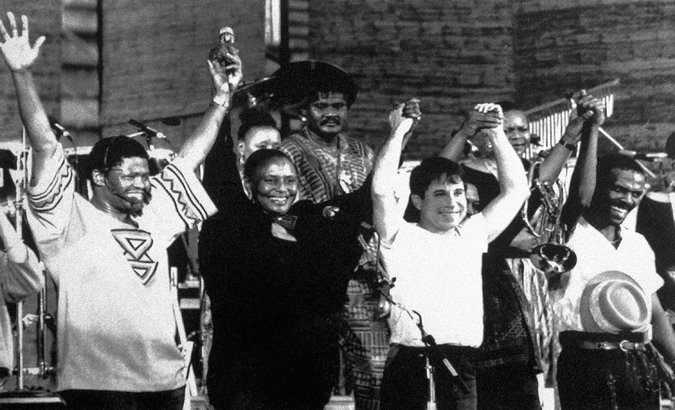 From left, Joseph Shabalala, Miriam Makeba, Paul Simon and Ray Phiri during a concert in Zimbabwe in 1987.

“Where Did We Go Wrong,” a 1984 duet with a white singer, Katie Pennington, was also refused radio play.

Mr. Simon recorded “Graceland” in 1985 and 1986, working on most of its songs with African musicians in Johannesburg and New York City. Mr. Phiri and two other members of Stimela backed Mr. Simon on the album track “Crazy Love, Vol. II,” and Mr. Phiri was part of a South African rhythm section that Mr. Simon brought to New York for further recording.

Elsewhere on the album he played guitar on the title track and on “Diamonds on the Soles of Her Shoes,” and was credited as both guitarist and co-arranger on “You Can Call Me Al,” “Under African Skies” and “Crazy Love, Vol. II.”

Mr. Simon paid tribute to Mr. Phiri on his website: “He was a beautiful, masterful guitarist and an inventive musician. He will be remembered as a patriot who used his music to fight apartheid and brought that message to the world.”

After the release of “Graceland,” in 1986, Mr. Phiri joined Mr. Simon’s touring band to perform songs from the album worldwide. “Graceland,” which introduced much of the outside world to the sound of South African music, has sold more than five million copies in the United States alone and won the Grammy Award for album of the year in 1988.

“It was an opportunity to sensitize the world about the apartheid regime,” Mr. Phiri said about “Graceland” in a 2013 interview with The Financial Gazette, a Zimbabwean publication. “We managed to bring the world’s attention to the apartheid monster.”

Mr. Phiri also appeared on Mr. Simon’s 1990 album, “The Rhythm of the Saints,” and toured with him into 1992. He rejoined Mr. Simon for a 25th-anniversary tour with the Graceland band, documented on the album and DVD “The Concert in Hyde Park,” released this year.

But Mr. Phiri’s career in South Africa was far more extensive. He had gold and platinum albums there with Stimela, which has continued to tour and record. Stimela’s 2010 album, “A Lifetime,” was named best adult contemporary album at the 2011 South African Music Awards, the country’s equivalent of the Grammys.

Mr. Phiri also had solo side projects, and produced and wrote songs for other acts. He was a longtime member of South Africa’s National Arts Council. He received a lifetime achievement award at the South African Music Awards in 2012. There was no immediate information about survivors.

In 2011, Jacob Zuma, the president of South Africa, awarded Mr. Phiri the Order of Ikhamanga, a national honor, citing “the successful use of arts as an instrument of social transformation.” In a statement on Wednesday, Mr. Zuma called Mr. Phiri “a musical giant.”

“For me, music is the closest thing to religion,” Mr. Phiri said in “Under African Skies,” a 2011 documentary about the making of “Graceland.” “And if it’s utilized in the right way, it can inform and bring people closer, and they can find solutions to their problems.”