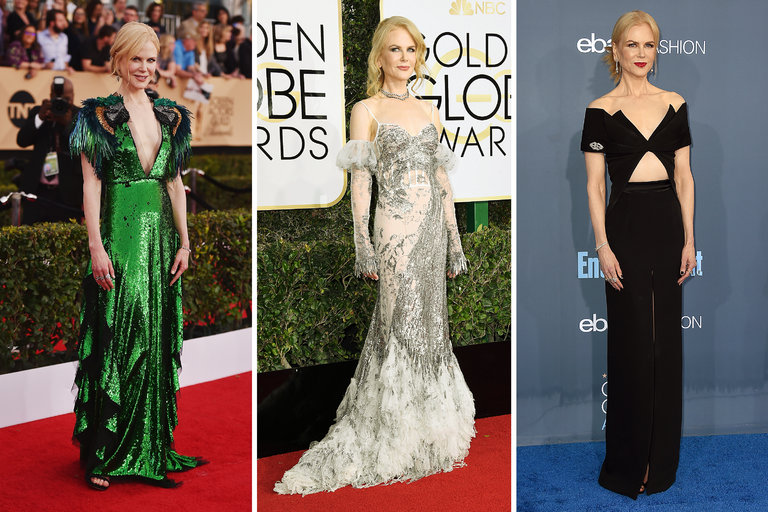 Peruse any list of best red carpet dresses of all time, and you’ll certainly find Nicole Kidman on it. Her 1997 chartreuse gown by John Galliano for Christian Dior was a head-turner. With its Asian-inspired floral embroidery and fur-trimmed side slit, there was nothing like it at the Oscars. Two decades later, Ms. Kidman, 49, is just as gutsy.

“She’s not going the safe road,” said her stylist Julia von Boehm, pointing to the controversial white and silver Alexander McQueen gown her client wore to the Golden Globes last month. While the gown was agreeably pretty, the addition of froufrou matching sleeves drew the ire of some commentators. “The sleeves are actually attached to the dress,” Ms. von Boehm said. “There was never a question of not wearing the sleeves. For me, it was the dress of the season. But we’re O.K. with having bad reviews from some people. No regrets.”

In Ms. von Boehm, Ms. Kidman has found a fashion-forward insider. The stylist is known for her editorial work with publications like Italian Vogue, German Vogue and Harper’s Bazaar. In fact, Ms. Kidman is her one and only celebrity client. “When I see the shows, I think of them with two brains: my editorial brain and the Nicole brain,” she said. “Sometimes they are one and the same.”

One keen advantage for Ms. Kidman is that she can fit into the actual runway garments. “We don’t need to create a replica for her — she even fits into the couture — which means I don’t have to limit myself to just the celebrity pieces a designer offers,” Ms. von Boehm said. “We can also be very much on point, and on time, with what’s happening in fashion.”

Indeed, her off-the-runway picks play like a highlight reel of fashion’s cool kids. For the Critics’ Choice Awards in December, Ms. Kidman wore a sharp black gown with cutout bodice by the young designer Brandon Maxwell. Ms. von Boehm likes that Mr. Maxwell is already creating his own signature — elegant yet slightly graphic. There was also the pink printed Rodarte dress Ms. Kidman wore to the “Lion” premiere in New York in November. With its tiers, one long sleeve, unexpected scattering of embellishment and studded black belt, the vibe was romantic yet rock ’n’ roll.

The same month, Ms. Kidman donned a slightly retro ivory dress by Francesco Scognamiglio for the American Film Institute fest, and, for the Governors Awards, an unconventional black gown by Christopher Kane with sheer panels and a swath of metallic fabric. “That was a personal favorite of mine,” Ms. von Boehm said. “It was different and cool. A lot of celebrities have their one style that they go to. That’s not the case with Nicole. We jump around a lot.”

True to form, Ms. Kidman pulled off a dizzying number of transformations in January. She was a dreamy Juliet in a blush Dior gown with whimsical illustrations at the Palm Springs International Film Festival. At the Elle Women in Television party, she wore a classically fetching black Valentino midi-dress. For the Producers Guild Awards, she was every inch the proper (and nearly prudish) lady in a mock-neck, long-sleeve crystal-dotted Prada gown. A night later, for the Screen Actors Guild Awards, she transformed herself into an exotic creature in a shimmering emerald Gucci gown with plunging neckline and a parrot at each shoulder.

If there are constants to Ms. Kidman’s look, they are the subtleties. For one thing, she keeps her jewelry to a minimum. “If you have such a fashion-forward look, you cannot go crazy with jewelry,” Ms. von Boehm said. Ms. Kidman’s choices, she said, are meant “to be eclectic and feel as if she owns the pieces, as opposed to looking like she rented them.”

Then there’s her terrific posture, which can make a dress with a navel-grazing neckline seem like a T-shirt. “She’s very elegant in all of her movements, and she definitely understands clothes,” Ms. von Boehm said. “She could wear a rope for a dress and make it look fantastic.”