In 2015, she started a business called AnnaBis, a line of aroma-controlled handbags, clutches, vape cases and other pot-related accessories. Soon after, she began publishing cannabis-friendly travel guides exclusively for women — becoming one of a small but growing number of older women who are marijuana entrepreneurs.

“What other industry is growing so fast there’s the opportunity and low cost of entry?” Ms. Moss said. “Entrenched opportunities already have their systems set up. This hasn’t been created yet.”

Her story is typical of the women in their 50s, 60s and 70s who have started up businesses in the world of pot. Inspired partly by their own use of the drug for pain relief, or by caring for others who use it for their own aches, these women see viable business opportunities and view their work as therapeutic for their customers.

“It’s definitely a trend,” said Troy Dayton, the chief executive and a co-founder of the Arcview Group, an investment and market research firm that focuses on the cannabis industry.

“A lot of women have this family recipe, or they were making a certain kind of tincture for a loved one who was suffering. Now that pot is legal, they’re like, ‘Wow, that thing you were making for Grandma could be a real product.’”

According to Mr. Dayton, the market for legal recreational and medicinal marijuana in North America hit $6.7 billion in 2016, a 34 percent rise from the previous year. Marijuana Business Daily, a trade publication, reported in 2015 that women comprised about 36 percent of executives in the legal-marijuana industry, compared with 22 percent in senior roles in other areas.

Since the industry is still finding its way, there is no “built-in institutional bias against women of any age,” said Nancy Whiteman, 58, a co-owner of Wana Brands of Boulder, Colo., which sells sour gummies, salted caramels and other products laced with THC, marijuana’s main psychoactive ingredient.

“In a lot of other industries, there are hundreds of years of history of who is successful and who is not, and there are glass ceilings to be broken,” Ms. Whiteman said. “But there’s no norm here. Everyone is figuring it out together.” 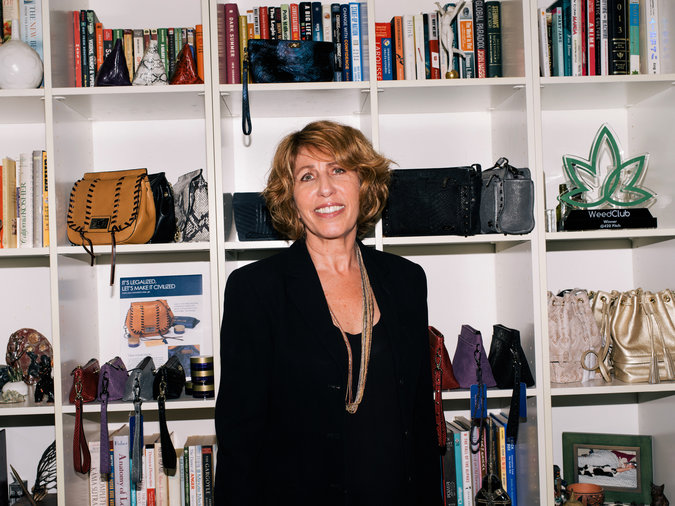 Cannabis start-ups are particularly appealing to older women who have had long careers. They are “smart businesswomen who see opportunities,” said John Hudak, a senior fellow at the Brookings Institution who has written the book “Marijuana: A Short History.”

These are women, Mr. Hudak said, “who have the type of background and skill sets that lend themselves to be highly useful in an industry like this: lobbying, consulting, finance, operations.”

That is exactly what Jane Heatley discovered. In 2010, Ms. Heatley, who owned a real estate title company for 30 years, moved from Barnstable, Mass., to Corona del Mar, Calif., to care for her mother after a stroke. Cannabis helped her mother’s indigestion and depression, and it lightened her pill use. So Ms. Heatley, 66, got licensed to be a primary caregiver in California, which included learning about medicinal marijuana.

After her mother died in 2012, she moved back east and applied for a license to open a dispensary. “I thought, for the last stage of my life, I’d like to do something to give back,” Ms. Heatley said. “How much of a glow can you get from a real estate transaction?”

She is now the president of the William Noyes Webster Foundation, a nonprofit that is authorized under Massachusetts law to develop, operate and manage medical marijuana dispensaries. She is set to open two in the fall.

Other entrepreneurs, like Frances Sue Taylor, 69, are specifically targeting seniors. She has been teaching older people about medical marijuana for the last six years and plans in the next few months to open a dispensary in Berkeley, Calif., just for people 50 and up.

There seems to be a market for such services: A study of 47,140 participants released in December, based on responses to the National Survey on Drug Use and Health, found that cannabis use among adults ages 50 to 64 had increased nearly 60 percent from 2006 to 2013, while use by people 65 and older had risen 250 percent.

Ms. Taylor, a former Catholic school principal, used to think marijuana was a “hard-core drug like crack or cocaine,” she said. “If someone would have told me 12 years ago that I’d be an advocate for cannabis, I’d say, ‘You’ve been smoking too much.’”

But now? “I get so much gratification from this work, and it’s so rewarding to see people get healed,” she said. “My life is better than ever. I’m healthy, and I’m starting a new business at 69.”

Lyn Kusher, 66, is the founder of Ma Kush’s Natural, which is based in Encinitas, Calif., and sells soaps, lotions, balms and edible cannabis treats. A mother of three, she had previously worked as a sales representative and pharmacy technician.

Like Ms. Moss, she arrived at her calling through pain. About four years ago, after hip-replacement surgery, Ms. Kusher began massaging coconut oil infused with THC into her side. It helped. So did homemade “protein balls” — peanut butter, sunflower seeds, protein powder and 15 milligrams of THC.

It occurred to her that her products might have the same effect on other people. Soon, she got certified to sell balms and bake mixes to dispensaries in San Diego.

“I’ve always grown plants and flowers and herbs, because I like growing,” said Ms. Kusher, who has a greenhouse filled with 30 pot plants of six different varieties. (Coincidentally, “kush” is a term among pot smokers for a high-grade strain of cannabis.)

Ms. Kusher said she was doing better than she had ever imagined, physically and financially. “This is the first time in my life I can completely support myself and my lifestyle,” she said.

An earlier version of this article misspelled part of the name of an area in California. It is Marina del Rey, not Del Ray.