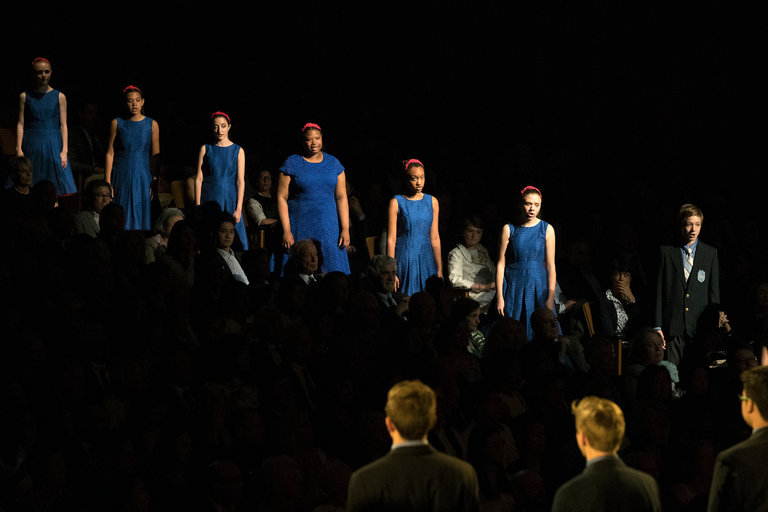 Members of the Young People’s Chorus of New York City singing in the aisles of David Geffen Hall for the opening night of Lincoln Center’s Mostly Mozart festival.

Give the Mostly Mozart festival credit for trying something different for the opening of its 2017 season on Tuesday at David Geffen Hall. Instead of the typical gala evening of Mozart favorites, the festival orchestra was joined by the wonderful Young People’s Chorus of New York City for a thoughtful program of symphony and song.

Titled “The Singing Heart,” the program, hosted by Bernadette Peters, celebrated the Enlightenment ideal of the child as a source of intuitive possibilities. If the concept lacked focus, the musical rewards were many. For the main Mozart offering, Louis Langrée, the festival’s music director, conducted the “Haffner” Symphony — though, as was common in Mozart’s day, the movements were performed separately. In between them, the Young People’s Chorus sang folk songs and spirituals.

The program, which ended with a rousing account of Beethoven’s jubilant “Choral Fantasy,” did not quite hold together. Still, this experiment has to be seen in the context of the festival’s innovations in recent years under Jane Moss, its artistic director.

Ms. Moss brought in Mr. Langrée in 2002 and, with him, shook up what had become a calcified series. They have created a residency for the International Contemporary Ensemble, offered late-night concerts at the Kaplan Penthouse, and even presented significant opera productions. Visiting ensembles have often played bracing programs. But the main set of concerts by the festival’s orchestra has remained largely traditional.

“The Singing Heart” started powerfully, with the endearing Young People’s Chorus, standing in the aisles and at the front of the stage, singing a ravishing a cappella account of a solemnly beautiful Mozart “Kyrie,” written when the composer was 16.

Then Mr. Langrée conducted a spirited performance of the first movement of the “Haffner” Symphony. He drew crisp, buoyant playing from the orchestra in all four movements. Still, the “Haffner” did not particularly add to the ostensible youth theme. And, in truth, it was hard for the orchestra to compete with the splendid singing of some unusual folk songs by the chorus, led by Francisco J. Núñez, its artistic director.