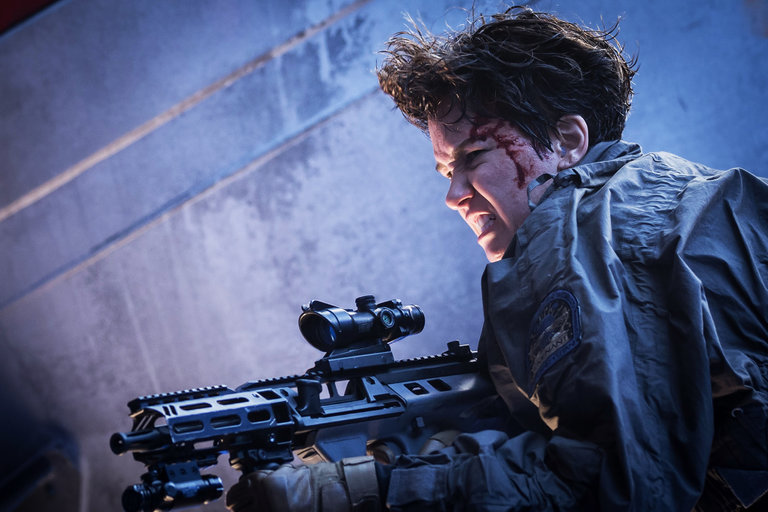 When the larval alien at last explodes out of a human torso, you may experience, along with the expected jolt of fright, a curious sensation of relief, even affection. So much has changed in the world, and in movies, since the first “Alien” freaked out audiences in 1979, that the appearance of a chittering, scurrying, fast-spawning extraterrestrial predator feels like a visit from an old friend. Humanity may have lapsed into terminal tedium or hubristic stupidity, but that creature, with long, slender limbs and a cranium like a speedskater’s helmet, remains interesting.

The same can be said about “Alien: Covenant,” which follows “Prometheus” in Ridley Scott’s 21st-century refurbishing of the franchise he initiated (with the crucial contributions of Sigourney Weaver and the graphic artist H. R. Giger) almost 40 years ago. It’s an interesting movie. I wish I could be more effusive, but “Covenant,” for all its interplanetary ranging, commits itself above all to the canny management of expectations.

To complain about its lack of ambition would be to misconstrue its intentions. Rather than setting out to conquer new worlds or excavate primal fears, this “Alien” is content to uphold a long-lived and well-regarded brand. Correcting some of the previous film’s mistakes — not enough alien! too much mythological mumbo-jumbo best left to movies with “Star” in the title! — Mr. Scott parcels out carefully measured portions of awe, wonder and terror on the established installment plan. This episode needs to satisfy you just enough to make sure you come back for the next one.

The story begins 10 years after the events of “Prometheus” and ends en route to a sequel that will bring us closer to the beginning of the cycle. (Arranging installments in sequential order is a totally old-fashioned, linear, 20th-century way of doing business.) As usual, a starship is plying the far reaches of space. As usual, the crew is a collection of talented actors obeying the imperatives of science-fiction seriousness. There are a bunch of married couples — James Franco and Katherine Waterston; Danny McBride and Amy Seimetz; Demián Bichir and Nathaniel Dean; Billy Crudup and Carmen Ejogo — and others with enough personality to make us feel a little something when they die.

Most of them do. Mr. Franco’s character, the captain of the Covenant, is a goner at the outset, reanimated in videos that stir his widow’s grief. The first mate (Mr. Crudup) assumes command and leads his subordinates onto the surface of the green but curiously lifeless planet, the very spot where the Prometheus disappeared. There they meet a robot named David, who invites some of the astronauts back to his cave to look at his etchings.

David — seen in “Prometheus” and in a Kubrick-esque prologue here — is played by Michael Fassbender. So is another robot named Walter, a slightly updated model from the Weyland corporation. The differences between the two machines are striking. Walter wears his hair parted on the side and has been engineered to speak like someone from Wisconsin. (How does Mr. Fassbender do it?)

David, in contrast, has a crisp British accent and an acquaintance with human culture that extends to Wagner and Michelangelo but is a bit wobbly on romantic poetry. Viewers who stayed awake through freshman English or the fifth season of “Breaking Bad” know full well that Byron didn’t write “Ozymandias.” I’m telling you this so you aren’t fooled (as I confess I was) into spending a few minutes feeling smarter than the screenwriters, John Logan and Dante Harper. I don’t think that counts as a spoiler.