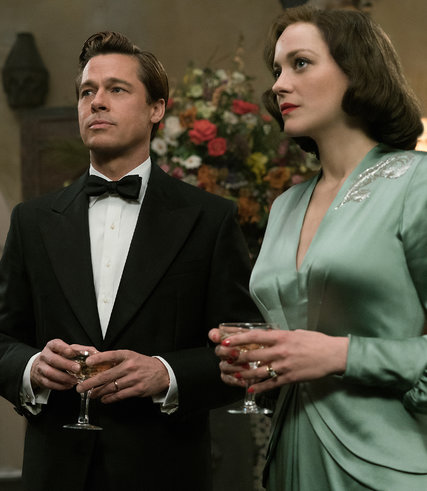 It’s about how the problems in this crazy world don’t amount to a hill of beans next to the troubles of two people in love. The singing of “La Marseillaise” figures prominently and tearfully in the plot. The city of Casablanca itself functions for the lovers, played by Brad Pitt and Marion Cotillard, much in the way that Paris does for Ilsa and Rick. It’s the scene of their first bliss, the place they’ll always have when things get complicated elsewhere.

I don’t want to press the comparison too far. For one thing, there is more Alfred Hitchcock than Michael Curtiz in this movie’s DNA. For another, whereas “Casablanca” put forth a spine-stiffening anti-fascist call to arms, “Allied” offers the comforts of elegant escapism. Its moral complexities and political ambiguities are intriguing rather than troubling, its ethical and emotional agonies a diversion from rather than a reflection of our own.

Which is just fine with me. There are nits to pick, of course. Mr. Pitt, playing a Canadian wing commander in the Royal Air Force, has apparently drawn inspiration from the trees in the great forests of the North. He is handsome, trim and efficient, but the same might be said of a wooden canoe, and his character’s stoical reserve often feels more like an empty space than a deep pool of untapped feeling. This changes toward the end, but the final minutes of “Allied” also provide some grounds for complaint. They are puffy and sentimental, the cinematic equivalent of a cloying dessert following an otherwise well-prepared meal.

If I may pursue the culinary metaphor, and supplement it with a different comparison: “Allied,” while neither haute cuisine or haute couture, is like an expertly tailored suit or a properly cooked classic dish. It’s not so much a work of art as a triumph of craft, and therefore a reminder of the deep pleasures of old-fashioned technique and long experience.

Mr. Zemeckis has made more ambitious, more dazzling films — as a dogmatic anti-Gumpian, my list of favorites would include “Back to the Future,” “Who Framed Roger Rabbit” and “Cast Away” — but this one may be the purest and most relaxed demonstration of his mastery.

Like Steven Spielberg’s “Bridge of Spies,” it infuses a venerable genre and a familiar period with new interest. The first shot, of Mr. Pitt’s character, Max Vatan, parachuting into the Moroccan desert, is hypnotically beautiful and strange. Your eye keeps recalibrating the perspective, anticipating Max’s touchdown when he is still far above the ground and then blinking in surprise when he finally lands. The rest of the film produces a similar effect, teasing your expectations and concealing cards in its impeccable sleeves.

Once in Casablanca, Max is introduced to Marianne Beauséjour, a French resistance fighter who is his partner on a dangerous mission. Their orders are to pretend that they are married, and they end up giving themselves wholeheartedly to the performance, and to each other. Marianne explains that part of her method is to make sure that, whatever the details of the imposture, the feeling is real. That assertion will haunt the second half of the movie, which follows the couple to London.

At this point I’m reluctant — though not as reluctant as some of the trailers — to say more. “Allied” is, among other things, a marvel of structure, a perfectly bifurcated story that manages a drastic shift in tone with exquisite aplomb. Max and Marianne set up house in Hampstead; she gives birth to a daughter during an air raid; he commutes to a mostly deskbound job, and the audience is free to appreciate the work of a superb supporting cast that includes Jared Harris, Lizzy Caplan and Simon McBurney.

Ordinary life during wartime — a shuffle of tedium and hysteria, bureaucratic entanglement and everyday pleasures — is evoked in fine detail. Mr. Zemeckis and the screenwriter, Steven Knight, plant almost imperceptible clues that blossom into sinister and scary possibilities in a way that is both shocking and satisfying. You have an itchy premonition that something terrible is going to happen, and when it does the itch is scratched.

“Standard operating procedure for intimate betrayal” is a military catchphrase that haunts “Allied,” a plausible portrait of a midcentury marriage that is also a fantastical piece of trompe-l’oeil storytelling. Ms. Cotillard, in a remarkable series of frocks, hats, coats and trouser suits, is the key to the film’s spell. Is Marianne a stylized studio-era feminine ideal, or a film noir femme fatale — or something else entirely, a modern woman decked out in Hollywood hand-me-downs?

You would not mistake this for an old movie. The language is too raw, the sexuality too frank, the politics too cloudy. But you might nonetheless feel like an older kind of moviegoer while you’re watching it: an adult, for one thing, whose intelligence is respected by an intricate, thematically thorny plot even as your thirst for visceral excitement is slaked by clean and breathless action sequences. You also get to look at beautiful people in (and half out of) beautiful clothes. The fundamental things apply.