Whereas Williams’s stage directions describe the set as “rather dim and poetic,” this production begins with a bleak, nearly naked, fully lighted stage, with a metal cart of props. (Andrew Lieberman did the set, with lighting by Adam Silverman.) The cast enters solemnly through an audience-level exit door, assembling in front of the stage with the house lights still on. 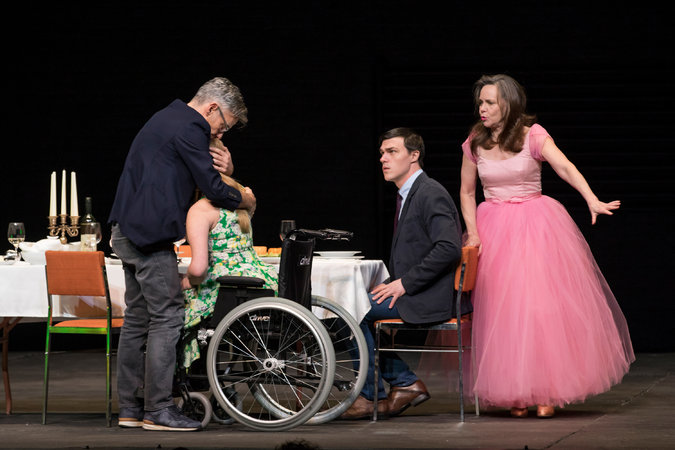 From left, Joe Mantello, Ms. Ferris, Finn Wittrock and Ms. Field in a scene from the play, directed by Sam Gold.

When Tom, playing with the idea of the writer as illusionist, starts off by telling us that “I have things up my sleeves,” you think, “No, you couldn’t possibly; you’re wearing a T-shirt.” Later he does extract something from his clothing, a shimmering magician’s scarf, but it comes from the front of his trousers, after they’re unbuckled and unzipped. Truth, it seems, lies south of the imagination.

As you may have inferred, this is a production in which subtext elbows text out of bounds. The superannuated Southern belle Amanda, Tom’s garrulous and desperate mother, is allowed few of the fantasist flourishes that usually embellish the character.

Instead, Ms. Field gives us a grim, angry, kitchen-sink Everymom, relentless in her disapproval of her underachieving grown-up children, with whom she shares a St. Louis apartment during the Great Depression. Though advance word had it that Mr. Mantello’s interpretation would unveil Tom’s gay identity, he comes across as a middle-aged, nerdy intellectual.

There are even inklings of Woody Allen in Mr. Mantello’s line readings. He seems distanced from the past not only by the years but also by a flippant detachment. Shouldering the immense burden of being the cause of Amanda and Tom’s discontent and guilt is Madison Ferris, making her Broadway debut in the role of Laura, the reclusive daughter of the family.

Unlike most actresses who have taken on this part, Ms. Ferris, who has muscular dystrophy, is visibly disabled and spends much of the play in a wheelchair. When she walks, arching her back, she uses her arms as well as her legs. Everyday movement is a struggle for this Laura, who in the script has only a slight limp, and the care and protection of her loom larger than ever for her mother and her brother. (Dad left the family long before the play begins.)

Yet Ms. Ferris, who emanates a no-nonsense spirit of independence, is the least pitiable Laura I have seen. She stands up to her mother in conversation with the eye-rolling exasperation of a contemporary teenager, and she has an insolent beauty, with a face that brings to mind the young Debbie Harry.

She is not the willfully invisible, shyness-sickened girl recalled by the play’s fourth character, Jim O’Connor (Finn Wittrock), who knew Laura when they were in high school. Jim is better known as the Gentleman Caller, the embodiment of Amanda’s hopes for a husband for Laura, or, as Tom puts it, “the long-delayed but always expected something that we live for.”

Jim is also described by Tom as “an emissary from a world of reality.” So perhaps it makes sense that Mr. Wittrock gives the most conventional, and vital, performance in the production, exuding an only slightly exaggerated air of shaky all-American confidence.

But even he does not escape the impression that this production is less a thought-through interpretation than a sustained scene-study class. Individual encounters seem to float within the “safe space” of the Actors Studio, where students are encouraged to experiment.

Thus we have Tom pulling Amanda into his lap, as if she were a cuddly doll, and Ms. Field trying on different accents. She only goes full Southern in the Gentleman Caller scenes, for which she has been outfitted with a ratty, Halloween princess concoction of pink tulle (by the costume designer Wojciech Dziedzic).

It should be noted that Ms. Field — who provided a first-rate Amanda at the Kennedy Center in Washington in 2004 — brings emotional conviction to all of Amanda’s incarnations. But like everything else in here, including an indoor rainstorm in which the Gentleman Caller makes like Gene Kelly, they fail to connect in meaningful ways.

Oh, yes, that rainstorm. It may make you think about a similar downpour last season in the Belgian director Ivo van Hove’s stunning interpretation of Arthur Miller’s “A View From the Bridge,” or about the ferocious wind that blew through his other Miller production on Broadway, “The Crucible.” This probably isn’t a coincidence.

Mr. Gold staged an earlier “Menagerie” for the Toneelgroep Amsterdam, where Mr. van Hove is the artistic director and the world’s leading practitioner of explosive theatrical minimalism. It’s an approach that Mr. Gold deployed to dazzling effect in his recent New York Theater Workshop production of “Othello,” starring Daniel Craig and David Oyelowo.

This sensibility can work beautifully with the tragedies of Miller and Shakespeare. Pure, visceral emotions, at odds with a society’s moral code, dominate such works. But with Williams, the tension lies in the poetic conflict between style and substance.

Illusions are part of the fabric of his plays, as well as of his fantasy-spinning characters, like Amanda and Blanche DuBois. They are transparent illusions, allowing clear views of the undermining reality beneath. Williams saw heroism and artistry in such poses and pretenses. Take them away, and you deprive the plays of their engine of conflict.

There is more than one way to do “Menagerie.” John Tiffany’s heart-rending 2013 production, starring Cherry Jones, also dispensed with conventional scenery and, at times, naturalistic movement. But this only enhanced the notion of the play as a work of capricious, tortured memory.

On occasion, Mr. Gold’s interpretation takes on the vicious aspect of a nightmare in which you see your past at its distorted worst. But even that vision is not sustained. When a plot turn plunges the theater into abject darkness late in the play, it only gives literal life to what you’ve been feeling all along.