Home Entertainment Review: ‘Everybody Knows … Elizabeth Murray’ and Now You Will Too 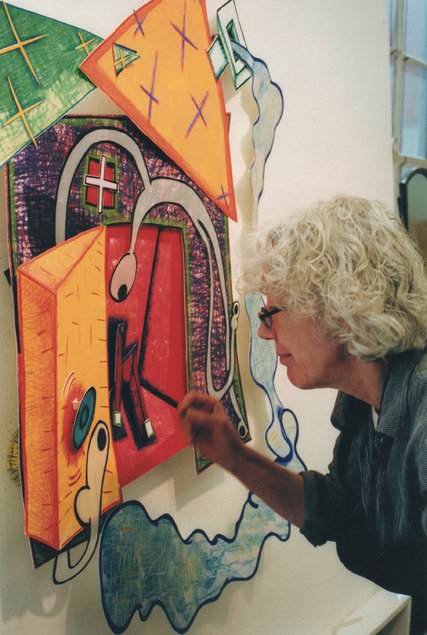 The artist Elizabeth Murray at work in Kristi Zea’s film.

While she achieved a good deal of recognition in her lifetime, Elizabeth Murray, the subject of this fine yet too-short documentary, remains an American artist who hasn’t quite gotten her due. One hopes “Everybody Knows … Elizabeth Murray” changes that at least a little.

This cogent, fascinating portrait of the artist, who died in 2007 at 66, was made over several years by Kristi Zea, best known for her work as a production designer on notable films directed by Martin Scorsese and Jonathan Demme (among them “Goodfellas” and “The Silence of the Lambs”). The movie shows the great variety of Murray’s always vivid, colorful work, and culminates with a triumph not just for Murray but also, as the film takes pains to point out, for women in American art: a retrospective at the Museum of Modern Art. (An exhibition of her work is at the gallery Canada through Jan. 29.)

Murray comes across as personable, friendly, extremely thoughtful and wholly admirable. The movie, perhaps without intending to, demonstrates that one needn’t be a prickly person to be a wonderful artist. Meryl Streep, reading from Murray’s journals, does well communicating her emotional and intellectual acuity. While remaining upbeat about the artist’s legacy, “Everybody Knows” is underscored by a sense of just how much the art world lost when Murray left it.

This brief feature is accompanied at Film Forum by a 30-minute short, “The 100 Years Show,” a lively look at the Cuban-born artist Carmen Herrera, an art-world “discovery” as she approached her centenary. Now 101, she finally received a solo exhibition at a major New York museum (the Whitney Museum of American Art) last year.