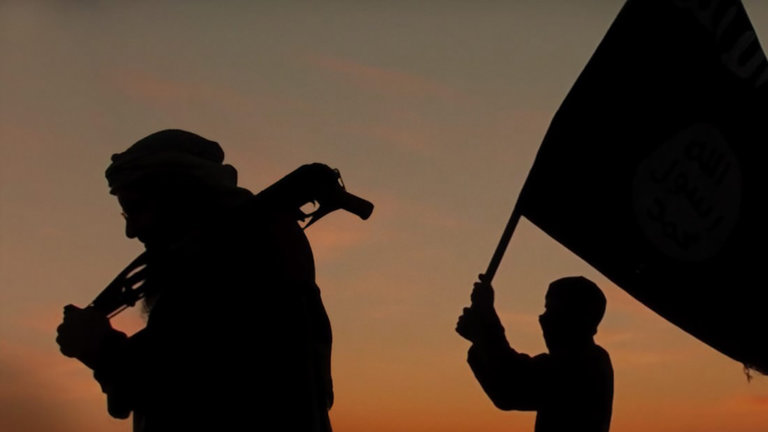 A scene from “City of Ghosts,” a documentary by Matthew Heineman.

In 796, the caliph Harun al-Rashid moved the seat of the Muslim Empire to the northern Syrian city of Raqqa, on the banks of the Euphrates. There, Harun — the inspiration for a caliph in “One Thousand and One Nights” — is said to have played polo and perfumed the air with garments worn by female slaves. Raqqa’s later history largely registers as more mundane, a tale of declines and revivals that turned catastrophic when the Islamic State, or ISIS, seized it in 2014, making the city its effective capital. American-backed forces are currently battling ISIS for control of a city in ruins.

“City of Ghosts,” a blunt instrument of a documentary, is an urgent and heart-heavy account of Syrian resistance from the ground up. Specifically, it recounts the story and activism of Raqqa Is Being Slaughtered Silently, or R.B.S.S., a citizen-journalist initiative that emerged in April 2014 to secretly record the atrocities committed by ISIS in Raqqa. (R.B.S.S.’s website states that the group is nonpartisan and explains that it is “a campaign launched by a group of nonviolent activists in Raqqa to expose the atrocities committed by the regime of Bashar al-Assad and terrorist extremist group the Islamic State of Iraq and Syria” toward civilians in that city.)

Directed by Matthew Heineman, “City of Ghosts” primarily focuses on three R.B.S.S. activists identified by their first names — Aziz, Hamoud and Mohamad — who, even after being forced to flee Raqqa, intently work to get images and information about the city out into the world. Mr. Heineman, who is also the movie’s cinematographer, more or less opens and closes the documentary in 2015 with some of the activists in New York, where R.B.S.S. received an award from the nonprofit group the Committee to Protect Journalists. It’s a distracting framing device that suggests Mr. Heineman believed that he first needed to give his audience reassuringly recognizable faces. Cut to David Remnick, editor of The New Yorker, at the podium.

“City of Ghosts” is best when it lets the activists tell their own stories, which they do in smoothly edited tag-team voice-over, in on-camera scenes from their life abroad and in ghastly underground images recorded in Raqqa. It’s an account of heroic resistance that essentially begins in 2011 when the Arab Spring reached Syria (“we started to scream for freedom”), and peaceful demonstrations against President Assad were met with state violence followed by power grabs. Along the way, Mr. Heineman furnishes a sketchy look at the various players and geopolitical stakes, glossing over Syria’s historical complexities and the role that the United States has played in the rise of ISIS.