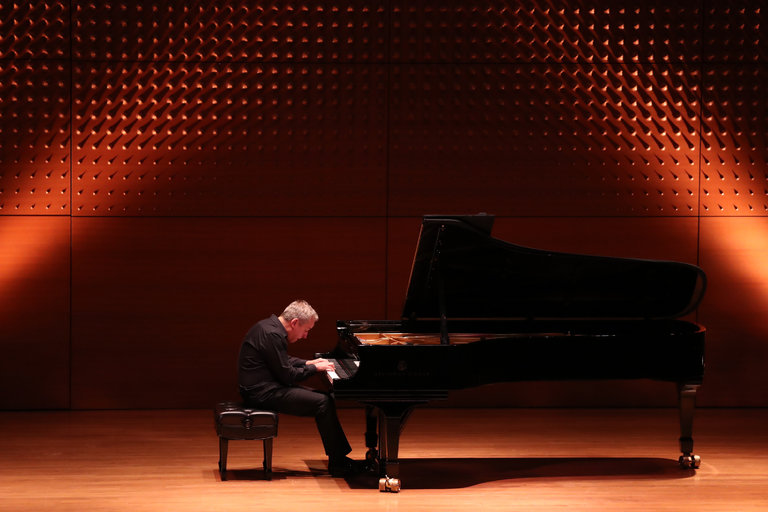 The inquisitive pianist Jeremy Denk faced a challenge in planning “Medieval to Modern,” the program he presented at Alice Tully Hall on Wednesday. Over some 80 minutes, with no breaks, Mr. Denk played 23 works spanning 600 years, from a lament by the 14th-century French composer Guillaume de Machaut to an obsessive 1985 étude by Gyorgy Ligeti.

Yet how do you perform such a program without having it coming across like a stiff lesson in music history? Or even a stunt?

“Maybe some of you don’t know what you’ve gotten yourselves into,” Mr. Denk, who excels at spoken commentaries, told the audience before starting. He explained that in devising this program, which concluded Lincoln Center’s White Light Festival, he had tried to choose pieces that would tell a story, a centuries-long tale with twists and turns, tracing a long arc of decisions, choices and styles.

Then he began. Mr. Denk played troubadour songs and excerpts from sacred works by several medieval composers, in his own arrangements. The austere beauty of the Machaut piece for two voices came through poignantly in Mr. Denk’s subdued performance. He made the most of the jerky rhythms and interplay of voices in Guillaume Dufay’s “Franc cuer gentil,” a secular song.

With a William Byrd “Volutarie” Mr. Denk finally arrived at something composed for an early keyboard instrument, an Elizabethan virginal. The music abounds in swirling runs and filigree, breezily dispatched by Mr. Denk. Bach’s Chromatic Fantasy and Fugue, the longest piece on the program, was also its historical “hinge,” as Mr. Denk put it in a program note. The boldly episodic and frenzied fantasy, coupled with a stern, awesome fugue, somehow seemed to sum up music’s past while anticipating its future.

Mr. Denk’s story kept unfolding with chapters by Mozart, Beethoven, Schumann, Chopin and, a high point, Liszt’s ingenious transcription of the “Liebestod” from Wagner’s “Tristan und Isolde.” Moving from that to a late Brahms intermezzo (1893), then the first of Schoenberg’s Three Piano Pieces (1909), made the breakdown of tonality seem an irresistible imperative.

The watery colorings of Debussy’s “Reflets dans l’eau” and Stravinsky’s Cubist-like deconstruction in “Piano-Rag-Music” offered different kinds of radicalism. Stockhausen’s flinty, shattering “Klavierstück I” somehow set the mood for a beguiling Minimalist étude by Philip Glass. After the Ligeti étude, Mr. Denk ended by repeating the second piece he had played, a wistful medieval song by Gilles Binchois, which made this story seem circular. All the performances were fresh and insightful.