Charlie Puth sauntered onto the Madison Square Garden stage Friday night with arms up and out, in a sort of parabola, as if harvesting the adulation being fired at him from the crowd like so many tiny pebbles.

Mr. Puth is a not-quite-yet pop star who specializes in the anthemically maudlin. In the last two years, he’s had four big hits, three of them with other people. He has an improving haircut.

All of which is to say that his relationship to pop music’s stratosphere is liminal at best, and possibly temporary. At Z100’s Jingle Ball 2016 — this year’s edition of the pop radio revue that comes every year to the Garden — he was welcomed like a hot out-of-town cousin at a family holiday dinner: Is he one of us? Oh, yeah, he’s one of ours! Wait, who is he? We don’t, like, even know him. 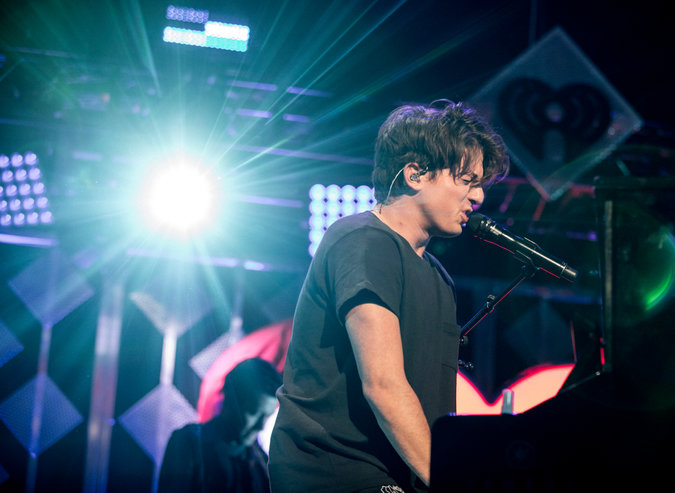 The New York Jingle Ball is one stop on a barnstorming tour that travels the country, sponsored by the radio conglomerate iHeartRadio, and serves as a proxy referendum on the year in pop music. In this world, terrestrial radio makes its case as the original viral spreader of ideas, and one with a great deal of power, still.

What that has meant in recent years is the return of dance music to the fore, a movement deeply embedded into this year’s Jingle Ball lineup, which included the outlandishly popular production duo the Chainsmokers; the pop idol and dance-music carpetbagger Justin Bieber; the D.J.-producer Diplo, behind the genre’s more eclectic mainstream moments; the powerful young vocalist Daya; and others.

But this was a pop universe curiously wiped clean of race. There was essentially no hip-hop, except as a shadow influence. No Drake or Rihanna or the Weeknd. No Bruno Mars. Apart from the members of the girl group Fifth Harmony and the guitar player for the rock band DNCE, every performer here was white.

Mr. Bieber — at 22, already a veteran — performed last, at around 11:30 p.m. (introduced, naturally, by Sarah Jessica Parker). “One of my latest shows,” he said, not that the thousands of tween and teenage girls who had waited out four hours of lesser lights minded one bit. Mr. Bieber’s relationship to live performance has been intermittently tortured of late, but he was admirably professional and genial here, especially when he dispensed with the awkwardly delivered choreography on “Where Are Ü Now” and “Company” and strapped on an acoustic guitar for a spare version of “Cold Water” and a tart “Love Yourself.”

The gesture was a part of what appears to be Mr. Bieber’s continuing quest to make his very, very, very big fame a little smaller and more manageable. Compare that with the struggle of the Chainsmokers, who immediately preceded him onstage, trying to make small ideas seem big. Easily the most important singles-driven act of the year, the Chainsmokers make dance music that is often stripped of any of the aggression or sensuality usually associated with the style.

Their set was dizzying, from the confetti at the very beginning to the parts where Andrew Taggart’s microphone didn’t appear to be fully working, making for a silent-film tableau; to the wanton uses of the Red Hot Chili Peppers ballad “Under the Bridge” and the Miami bass classic “I Wanna Rock” (a.k.a. “Doo Doo Brown”); to the visionless presentation, which involved jumping up and down off a raised platform; to the moment where one of them asked, “Where my sexy moms?” before pressing play on Coldplay’s “Yellow.” Maybe 10 years ago, it all would have been the soundtrack for a movie scene in which someone absent-mindedly scrolled through the radio dial; now it’s what happens when you don’t change the station.

To their credit though, the Chainsmokers embraced a big-tent idea about pop largely absent from the rest of the show (apart from Mr. Bieber and Diplo, who played an aggressive, sometimes cheeky D.J. set). Fifth Harmony performed a simulacrum of ruthless precision in an impressive show-opening set, and Daya shout-sang her sneakily effective club-pop hits. There were perfunctory performances by Ariana Grande, Hailee Steinfeld and Ellie Goulding.

Vexingly, rock was better represented than hip-hop here, via the sentimental former One Direction singer Niall Horan; the earnest Danish band Lukas Graham, which has thrived largely in the absence of Ed Sheeran; and DNCE (fronted by another ex-boy-bander, Joe Jonas), which played slapstick arena ska-new wave, which sounded exactly as promising as that description.

DNCE came off like an adult’s idea of what a young person would embrace, but there were moments sprinkled throughout this concert where such disingenuousness was completely absent. One of the loudest receptions of the night was for Grace VanderWaal, a precociously thoughtful 12-year-old singer-songwriter-ukulele player who won this year’s installment of the reality-TV competition “America’s Got Talent.” And twice, in between sets, the video screens played the video for the viral hip-hop dance hit “Juju on That Beat,” and a couple of thousand young people in the crowd up stood up and hit the moves — a reminder that the most important fans here were children, with childish interests.

Which brings us back to Mr. Puth. During his anguished cabaret performance, he toggled between tight control, hunching over his piano, and grandiloquent gestures.

He sang well, if blankly. He enthusiastically thanked Capital One, the show’s sponsor. He gripped the microphone firmly, as if he could squeeze truth from it. And just as the crowd was cycling through its questions, he seemed to be puzzling through a few of his own: Why feign seriousness in a frivolous world? Is my hair too long for my face? Will I be back next year?