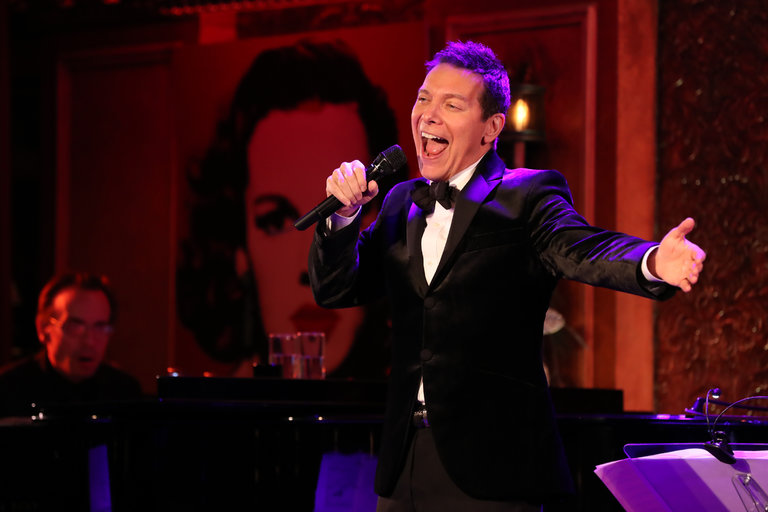 Michael Feinstein turned his seasonal show, “A Holiday to Remember,” into an homage to Judy Graland.

There were no jingling bells, Santa hats or signs of giddy festivity at Tuesday’s opening-night performance of Michael Feinstein’s show, “A Holiday to Remember,” at Feinstein’s/54 Below. This was the most sober evening of seasonal cheer I can recall in the singer’s long-running tradition of annual Christmastime fetes, which in earlier days evoked the glossy bonhomie of TV variety specials.

The evening’s focus was Judy Garland, who immortalized the Hugh Martin-Ralph Blane ballad “Have Yourself a Merry Little Christmas” in the 1944 MGM musical “Meet Me in St. Louis.” This smiling-through-tears reassurance that “Someday soon, we all will be together,” which in the movie Garland crooned in a soft trembling voice to a weeping Margaret O’Brien, distills the nostalgic side of Christmas as acutely as any Bing Crosby evergreen. And as Mr. Feinstein sang it at the end of the evening, his performance was restrained, dignified and deeply felt.

“A Holiday to Remember” was also devoid of the sort of comic shtick that has long been a staple of Mr. Feinstein’s nightclub performances. From its opening number, “That’s Entertainment,” the show was a loving, knowledgeable tribute to a show-business legend whom Mr. Feinstein painted as a font of optimism and joy with a great sense of humor, despite her association with wistful torch songs. The one outright wrist-slasher was John Meyer’s “After the Holidays,” a plea to a departing lover to stay until New Year’s.

One of Garland’s secrets of how to deliver a ballad, he said, was to smile while singing it. There was a sequence of songs from “The Wizard of Oz” that were sung by Dorothy’s partners on the Yellow Brick Road, and a medley of Garland ballads. He brought a special poignancy to the Noël Coward standard “If Love Were All,” a lament about the loneliness of celebrity. Mr. Feinstein specializes in unearthing rare obscurities and his surprise treat on Tuesday was a scratchy home recording of Garland singing “I’ll Be Seeing You.”

In September, Mr. Feinstein turned 60, a marker that is difficult to take in partly because this onetime wunderkind who once worked as Ira Gershwin’s assistant looks more than a decade younger; he displays an undiminished passion for the American songbook and the show-business tradition embodied by Garland, who died at 47. Without Mr. Feinstein’s tireless efforts as a performer and historian, how vital would that tradition be today?