Home Lifestyle Art Review: Tackling a Major Taboo in ‘The Boy Who Danced on Air’ 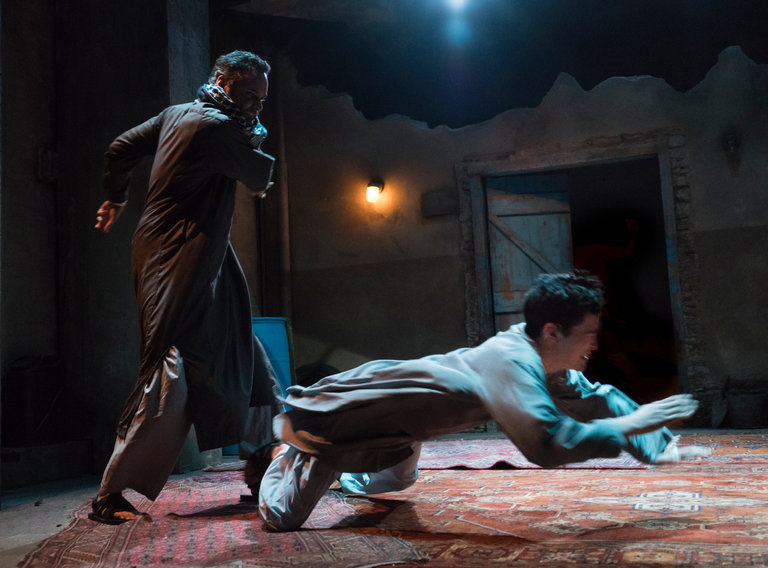 Jonathan Raviv, left, and Troy Iwata in Tim Rosser and Charlie Sohne’s musical “The Boy Who Danced on Air” at the June Havoc Theater.

Given enough intellectual muscle, any outré story can probably be pounded into a musical. For evidence, look no further than “Sweeney Todd,” “Fun Home” and “Hamilton,” three great shows of forbiddingly unlikely origin.

But the authors of “The Boy Who Danced on Air” have taken the challenge of difficult source material too far. Their troubling new musical, which opened Thursday in an Abingdon Theater Company production, was inspired by “The Dancing Boys of Afghanistan,” a 2010 documentary about, well, pedophilia.

Sure, the practice of bacha bazi — “boy play” in the Dari language of Afghanistan — includes much more than that. As Tim Rosser (who wrote the show’s music) and Charlie Sohne (who wrote the book and lyrics) explain in a program note, it is also an “ancient tradition where wealthy men buy boys from poorer families” and “train them to dance.” So the sexual abuse, which the show does not ignore, is seen in the context of historical precedent and local culture, much as those who defend it ask us to see genital cutting. Imagine that musical.

This one is about Paiman, a boy of 16, who was only 10 when he was sold to Jahandar, a married man then about 40. Jahandar explains that Paiman’s father “didn’t want you as much as I do.” But now that Paiman is sprouting peach fuzz, tradition decrees that their liaison must be severed. Jahandar arranges to marry him off: a prospect that each of them, in different ways, dreads.

The ick factor here is dangerously high, a problem that the production, directed by Tony Speciale, labors hard to mitigate through aesthetics. We see the preteenage Paiman only in silhouettes projected on the fabric of a tent, which allows for clever distortions of scale. (The lighting design is by Wen-Ling Liao.) The sexual content is similarly euphemized, in dances charmingly choreographed by Nejla Yatkin and in a few shirtless cuddles that suggest romance more than predation.

It would be enough of an achievement to make this story, which also involves forced cross-dressing and a great deal of violence, palatable. (“Kid Victory,” another recent musical involving pedophilia, faced a similar challenge.) But Mr. Rosser and Mr. Sohne were even more ambitious: They have two more stories to tell. In one, Paiman develops a crush on another dancing boy, Feda, who dreams of escaping to seek fame as a singer in the big city. (That would be Chaghcharan.) Paiman wants to go with him but must first overcome his fear of leaving (or being punished by) Jahandar. A love ballad (“When I Have a Boy of My Own”) ends the first act with a kiss.

I wish the creative team had been content to tell just that story: a familiar one in outline, certainly, but rich in unusual details. And the pedophilia story, though awkwardly handled, at least raises gripping issues. But the third story is entirely misbegotten. Taking a stab at political relevance, it features Jahandar stewing over the broken promises of the lately ended American intervention in his country. This leads to the show’s over-the-top, and then over-the-over-the-top, tragic ending.

That Mr. Rosser and Mr. Sohne, both in their early 30s, are able to make this material sing at all is almost alarming. It takes talent, yes, but also a certain amount of glibness to give the adult men lyrics like “Year by year the boy learns his place” and to turn Jahandar’s turbulent interior monologues into credible song. Still, the music — high-end theatrical pop adorned with melisma and other Silk Road accents — rewards the ear and is well orchestrated by the composer for a small combo including the lutelike Afghan rubab. What’s more, it is beautifully sung by cast members obviously hired for their voices. And, it must be said, for their looks.