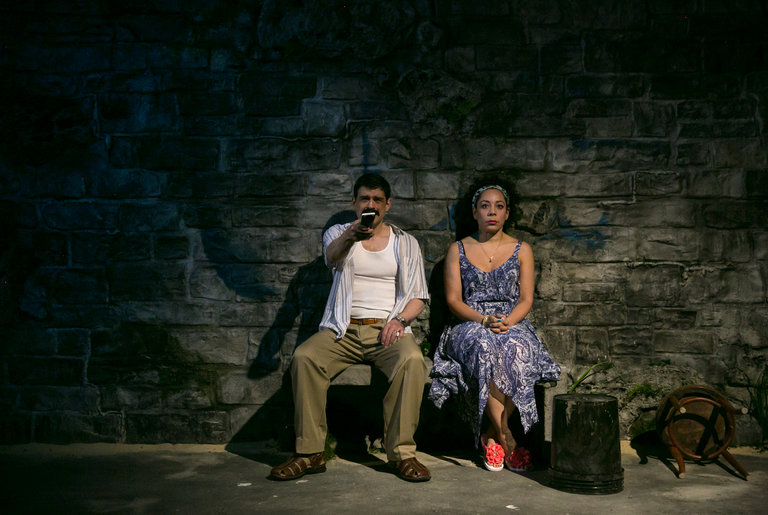 Juan Carlos Hernández and Selenis Leyva in “Tell Hector I Miss Him.”

x — I spent a significant portion of “Tell Hector I Miss Him,” a new play by Paola Lázaro that opened on Monday at the Atlantic Theater Company’s second stage, waiting for the title character to arrive. Spoiler alert: Like a certain figure in a seminal modern drama by Samuel Beckett, he never does.

This would not be a notable problem had Ms. Lázaro’s play compelled rapt attention. But while it is populated by some sharply drawn characters dangling eccentricities and pathologies (addiction foremost among them), and features some passages of biting humor, this darkish comedy-drama lacks focus and narrative drive. I waited in vain, not just for Hector’s hopefully galvanizing arrival, but for the dozen characters’ lives to connect in meaningful ways.

To be fair, some do, but some don’t, lending the play a scattered quality. It comes to feel like a few short plays spliced together to form a full-length one, a collage that lacks an overarching design. Because the plot has so many strands, we never have a chance to engage fully with any one of them.

Still, under the sympathetic direction of David Mendizábal, the ample cast, which includes Selenis Leyva and Dascha Polanco from “Orange Is the New Black,” brings defining individuality to their characters, infusing them with a palpably real humanity, despite the occasional whimsical quirk. (One unhinged young woman meows like a cat.)

What they all share is a locale, a down-at-the-heels, drug-infested corner of Puerto Rico’s capital, San Juan. Clint Ramos’s set, dominated by two stone walls, captures the impoverished atmosphere efficiently, although it strains the eye’s patience to stare at these clammy-looking walls, which could almost suggest a prison — perhaps intentionally — for two hours and change. (More soothing are the video screens above the stage that show waves lapping the beach.)

A recurring theme: love trouble. One story arc follows a faintly melodramatic triangle among Mostro (Juan Carlos Hernández), who owns a bodega that binds together some of the story lines; his voluptuous wife, Samira (Ms. Leyva), who has been unable to become pregnant; and her passionate lover, the drug dealer Jeison (Victor Almanzar).

Mr. Almanzar brings a furious intensity to his performance, his eyes blazing with ardor whenever he sees his beloved, whom he is determined to separate from her husband. Ms. Leyva’s Samira, however, remains irresolute, lapping up the flaming confessions of love from Jeison, as well as the riotous sex, but reluctant to break with a husband who, while remote and dull, has at least proved steady. In Mr. Hernández’s grave performance, the emotionally reserved Mostro refuses to engage in the theatrics Jeison wants to invoke, retaining a rocklike stillness and stoicism despite the storms threatening to break around him.

Another plot strand involves a similarly frustrated passion, this time on the part of the 16-year-old Isis (Yadira Guevara-Prip, oozing schoolgirlish infatuation), painfully enamored of Malena (Ms. Polanco, all wary indifference), who is virtually unknown to her and 10 years older than she is. Although Malena and her friend Tati (Analisa Velez) do not initially welcome the company of this would-be sidekick and paramour, they eventually warm to her presence. One of the funnier and brasher passages — Ms. Lázaro does not shy away from raw language, to put it mildly — finds all three bonding over complaints that they don’t much like the looks of their genitalia.

Other characters include Toño (a half-jumpy, half-broody Alexander Flores), a teenager who’s been kicked out of school for sexually harassing a teacher; the hotheaded and put-upon Palito (an aptly jittery Sean Carvajal), Jeison’s brother, who was born with fetal alcohol syndrome and is moony about Tati, who puts up with him mainly because he’s free with his drugs and money; and El Mago (Luis Vega), who earns money doing card tricks for tourists, and comes to the rescue of his friend Hugo (Flaco Navaja) when, after a drunken binge, he soils himself on a bench.

While Ms. Lázaro’s characters are certainly vivid, they are sometimes burdened with baggage that is never really unpacked. In addition to being prone to flights of exaggerated lyricism on the subject of her love for Malena, for instance, Isis also has a mysterious disease we learn little about. Toño, whose mother (Lisa Ramirez) is a chronic alcoholic, has thoughts of killing himself, which he confesses to Mostro.

It is, of course, admirable for Ms. Lázaro to depict the full range of burdens and stresses that bedevil her characters, and the socioeconomic climate that engenders them. But in trying to paint such an expansive portrait of a community bound mostly by dysfunction, “Tell Hector I Miss Him” stretches itself too thin, resulting in a play with more breadth and color than depth.