Home Lifestyle Art Review: ‘The Present’: Even in Russia, It’s Hard to Turn 40

The mistress of these revels, I am happy to report, is the extraordinary screen star Cate Blanchett, making a long-awaited Broadway debut. Ms. Blanchett is portraying the hostess and birthday girl, Anna, a ravishing widow who is unhappily turning 40.

Ms. Blanchett knows how to hold a stage and, if necessary, hijack it. Her out-there performances in “A Streetcar Named Desire” (at the Brooklyn Academy of Music) and “Uncle Vanya” (at New York City Center), both for the Sydney Theater Company, were as brilliant as they were brave.

Such commanding, try-anything charisma is useful if you’re attempting to hold together a badly assembled party or, for that matter, play. But here Ms. Blanchett’s take-charge inventiveness is as sorely taxed as that of her character. Anna’s party turns into the kind of disaster that ends not only in tears but also bloodshed.

This production, on the other hand, feels moribund from the beginning. Frantic attempts at resuscitation by Ms. Blanchett and her valiant leading man (and unforgettable co-star in “Uncle Vanya”), a tireless Richard Roxburgh as a hapless homme fatale, only occasionally succeed in eliciting a pulse.

“The Present,” which has been adapted by Andrew Upton (Ms. Blanchett’s husband) and directed by John Crowley, is the Chekhov play that almost got away. Though the scholarship on its origins is uncertain, it appears that Chekhov began writing it as an 18-year-old student, and it exudes a youthful, passionate untidiness.

Its manuscript, a whopper in length, wasn’t published until nearly two decades after his death. An uncut version would take at least five hours; this one is three. 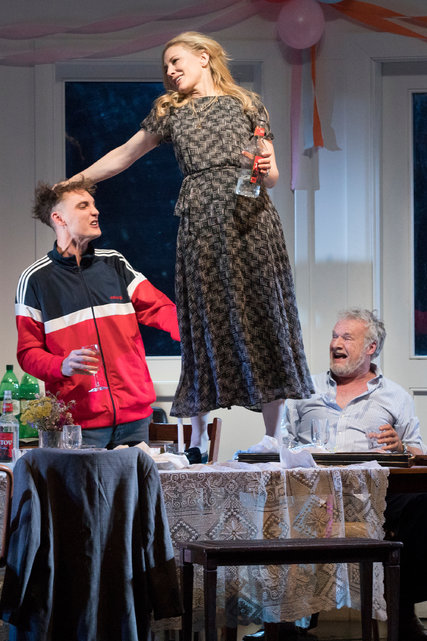 From left, Eamon Farren, Cate Blanchett and Martin Jacobs in “The Present” at the Barrymore Theater.

The eminent playwrights Michael Frayn and David Hare, among others, have done their best to domesticate this shaggy behemoth. Mr. Frayn reconceived it as an elegant sex farce, under the title “Wild Honey” (seen briefly on Broadway in the mid-1980s), while Mr. Hare’s adaptation hewed closer to the more brooding, tragicomic template usually associated with Chekhov.

That version is called “Platonov,” and I saw a fine production of it at London’s National Theater last summer. Directed by Jonathan Kent, it was set in the period in which it was written. And the vestiges of 19th-century decorum served as an appropriately chafing corset for the flabby plot.

Mr. Upton drags the story out of the twilight of the czars and into the post-Communist morning after of the mid-1990s. As in the original script, it’s a period of profound uneasiness, when a nation’s future is murky and its citizens unsure of their roles. But despite the inclusion of several catch-up soliloquies on recent Russian history, it’s hard to comprehend what they’re reacting against here.

Exit the robber barons (and the real aristocrats); enter the cold-eyed oligarchs and their murderous henchmen. Farewell, balalaikas; hello, the Clash. As for those without a fixed part in the new scheme of things, they’re the same old kvetchers of yore, doomed to circular philosophizing and self-destructive drinking.

Chief among these is Mikhail Platonov (Mr. Roxburgh), a provincial schoolteacher of vaulting wit and unfulfilled aspirations. He knew Anna when she was the young trophy wife of a powerful general, now dead. It’s at the general’s summer dacha — rendered with all the personality of an Ikea showroom by the show’s designer, Alice Babidge — that Anna has chosen to celebrate her birthday.

Her guests include her stepson, Sergei (Chris Ryan), who as a youth was best friends with Nikolai (Toby Schmitz) and Mikhail, who is married to Nikolai’s sister, Sasha (Susan Prior). Though Mikhail is a bloviator, a womanizer and a mean drunk, Sasha loves her bad-boy husband.

So, more problematically, do all the other women in the play, who, in addition to the patrician Anna, include Sergei’s wife, Sophia (Jacqueline McKenzie), a humanitarian physician, and Nikolai’s girlfriend, Maria (Anna Bamford). It’s hard to fathom the attraction, but apparently once you’ve had your first whiff of him, Mikhail is as addictive and dangerous as crack cocaine.

Maybe it’s because he’s livelier and more subversive than the other guys, who include Anna’s rich older suitors, Alexei (Martin Jacobs) and Yegor (David Downer). But like most of his contemporaries, Mikhail can’t stop talking about how directionless his life is.

Such flailing is common in Chekhov. But usually you understand the specific, idiosyncratic places his characters are coming from. In this version, everyone seems to be flailing interchangeably, in the same stale vacuum, for all eternity. (Setting the play’s third section in what looks like a fog-filled dreamscape only compounds the impression.)

Ms. Blanchett does bring colorful shades of excitement to being bored. Her Anna plays a great game of dramatically uninterested chess, and her response to a rambling speech by Mikhail at the lunch table is priceless. (Hint: it involves the removal of an undergarment.)

That comes just before that rip-roaring, scenery-destroying bacchanal I wrote about earlier. It’s one of the most memorable party sequences I’ve ever seen, a volcanic channeling of a displaced class’s fear, anger and disgust.

These people want to blow up their world, and in a way they do, most entertainingly. That leaves us with another full hour of tediously sorting through the ashes.