Home Lifestyle Art Review: ‘Villa’ Dramatizes a Plot of Chilean Land With a Dark Past 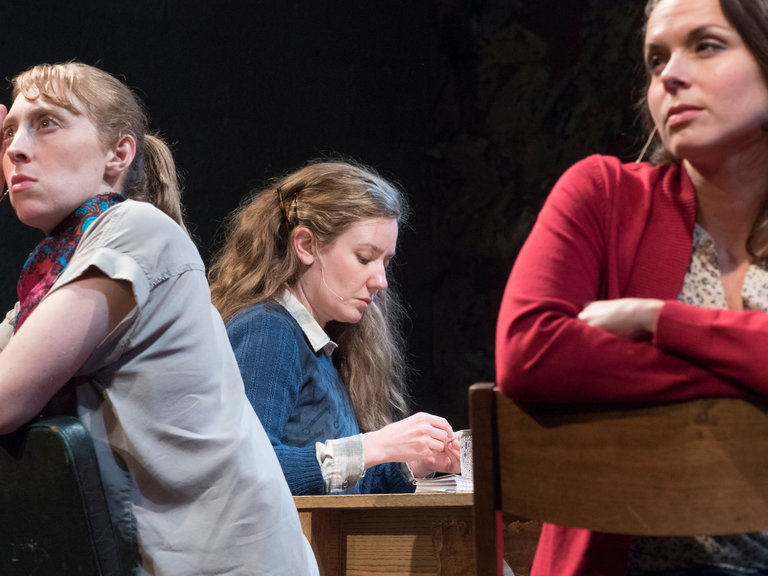 First, the atrocity. Then the architecture.

At the National September 11 Memorial Museum, walls of water plummet into twin black voids. In choosing this design, called “Reflecting Absence,” over thousands of competing proposals, a jury weighed how best to serve the living and revere the dead, how to answer trauma in landscape.

The three women in the stirring and mournful “Villa,” a drama by the Chilean playwright and director Guillermo Calderón, face a similarly daunting task. For reasons that remain opaque through most of the play, these women, all called Alejandra, have to choose what to do with a plot of land behind a red brick wall near Santiago, Chile. It once housed the Villa Grimaldi, a site of imprisonment and murder during Augusto Pinochet’s regime.

Should they use plastic and paint to recreate scenes of torture, theme-park style? Should they build an airy, educational museum? Should they preserve the garden survivors have made? Should they try to solve an easier problem, like world hunger, maybe, or grand unified theory?

Around a table cluttered with water glasses and a scale model of the Villa Grimaldi, the women sit in mismatched chairs and try to sort it all out. Through speeches and strategy and sabotaged secret ballots, they hack away at the problem until attempted murder or a psychotic break seems likelier than consensus. (And they don’t even have to decide whether to include a cafe and a gift shop.)

“Villa,” produced by the Play Company, could be fantastically depressing. Sometimes it is. (Rape by German shepherds is mentioned.) But the three actresses — Crystal Finn, Vivia Font and Harmony Stempel — give energetic, unfussy performances and get good comedic mileage out of the awfulness of committee work.

When one of the Alejandras delivers an impassioned sermon, she then seems surprised: “It’s weird because I don’t believe hardly anything of what I just said.” She even gets in a mordant joke about those dogs.

A repeat presence at the Public Theater’s Under the Radar festival, Mr. Calderón owes a debt to absurdism, which can sometimes make his material seem abstract rather than urgent. But he can’t forget that real people were tortured in the villa. Neither can the women. Neither can we. Their problem of what to do with this site becomes our problem, too.

Though he worked on the audio guide for the real Villa Grimaldi, he doesn’t give too many specifics — he isn’t interested in titillation via terror. Instead he offers just enough detail to understand why the women call the place “a stab wound,” “a black hole,” “an earthquake of the soul” and to help us feel those tremors.

We might also feel demoralized. Urged to contemplate some of the worst of what people can do to one another — for expediency, for ideology, for fun — it doesn’t seem to matter much what the women decide for the site. What design could address or explain such horror?

Maybe no design can. Same goes for a play or a poem or a painting. Still “Villa” argues that we have to try to make meaning anyway and that memorials should matter. It’s not sufficient to shove abomination under some attractive monument and call it a day.

Perhaps the women will find some ideal solution. Perhaps they won’t. But in talking through the problem of what to do with the Villa Grimaldi, they must acknowledge what the place means to them and what they mean to one another.

These Alejandras aren’t made of bricks and mortar or glass and steel. Yet in their pain and perplexity and resilience, they are a kind of memorial, too.

Category Off Off Broadway, Drama, Play