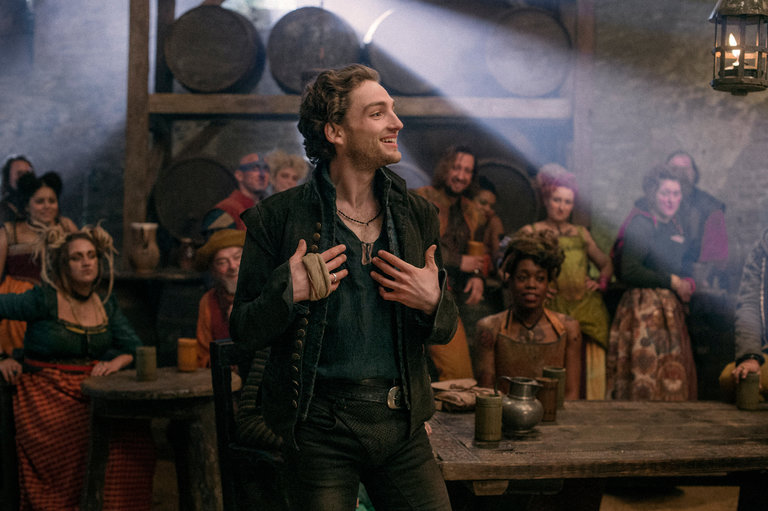 Laurie Davidson in “Will,” a TNT drama that depicts the youthful Shakespeare as he enters the London theatrical world.

William Shakespeare died on April 23, 1616, and, as the scholar Gary Taylor once wrote, “we have been reinventing him ever since.” That’s true not only of the meaning and import of his plays, but also of the man himself. Since relatively little is known about much of his life, we can envision it however we like. “Will,” a TNT drama that depicts the youthful Shakespeare as he enters the London theatrical world, imagines one defined by very 21st-century frothiness.

Laurie Davidson, in his first significant role, plays Shakespeare, who in Monday night’s premiere is leaving his wife and three children behind in Stratford-upon-Avon to try to carve out a career in London. In the city, he stumbles into a world that, at least as depicted in this excess-prone series, is rife with bacchanalia and back-stabbing, set to a jarring rock-’n’-roll soundtrack.

The show looks alternately like a steampunk Dickens adaptation (a street urchin fleeces the newly arrived Shakespeare almost immediately), a weird “Animal House” sequel, a bad drag show and an episode of the blood-and-orgy series “Spartacus.” It’s dotted with allusions to Shakespeare’s works in the style of “Shakespeare in Love,” but there are awkward touches that seem intended to convince the CW demographic that Shakespeare was just like a 21st-century 20-something: There is stage diving and a barroom poetry duel that suggests a rap battle.

Shakespeare falls in with the theatrical family of James Burbage (Colm Meaney), one of an assortment of real-life figures who make appearances here. Burbage’s daughter, Alice (Olivia DeJonge), is a sexual temptation but also sees Shakespeare’s potential, teaching him how to lift ideas from other authors and helping him with the writing as well.

Also on hand is Christopher Marlowe (Jamie Campbell Bower), a duplicitous weasel whose treatment for writer’s block is to be circled and groped by a group of naked men. A religious-persecution subplot finds Shakespeare having to hide his connections to Roman Catholicism and also gives the show an excuse to indulge in bloody tortures.

If you’re a theater lover who was hoping for an intelligent treatment of the great man’s formative years, it will all seem a bit silly. If you like overstuffed costume dramas with a veneer of literacy layered over debauchery, latch on.