Home Entertainment Richard Hammond: I thought I was going to die 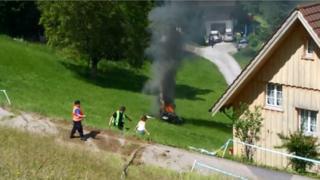 Pictures showed the car in flames shortly after the crash

Richard Hammond has spoken about how he thought he was going to die when he crashed a car earlier this month.

“What was probably going through my mind was ‘well, this is it,'” the Grand Tour presenter said, recalling the crash on a Swiss hillside.

“In fact that is what was going through my mind. I thought I’d had it.”

The host was on a practice run for a race in an electric car when the vehicle left the road, tumbled down the hill and burst into flames.

He described the experience as “like being in a tumble dryer full of bricks going down a hill”.

In a video posted on Drivetribe, he said: “I was aware that I was up, that I was high, that inevitably the car was going to come down.

“And yes of course there was a moment of dread. ‘Oh God I’m going to die.’ And also I was aware that the car was taking just such a beating.”

The crash came 11 years after the presenter was left in a coma by a high-speed crash as he filmed for the BBC’s Top Gear.

This time, he said he was conscious throughout. “I was thinking, ‘Yeah, I can’t make this.’

When the car finally came to a rest more than 100m from the road – and having narrowly missed a house – he dragged himself out of the vehicle before the first people came to his aid.

“I do remember saying to them, ‘Drag me by my arms not my legs because I think I’ve broken that leg.'”

It transpired that he had fractured his knee. He described how the accident had “collapsed the knee joint on the top of the bottom bone”.

But he recounted how, when he showed his youngest daughter the dressing on his knee, she was not entirely sympathetic. She told him: “Daddy you look like you’ve fallen over in the playground.”

He also said it hadn’t had a major impact on the filming schedule of the Amazon Prime programme.

The incident on 10 June took place as Hammond completed a hill climb in the Hemberg area. He had been driving a Rimac Concept One, an electric supercar built in Croatia, during filming for the show’s second season.