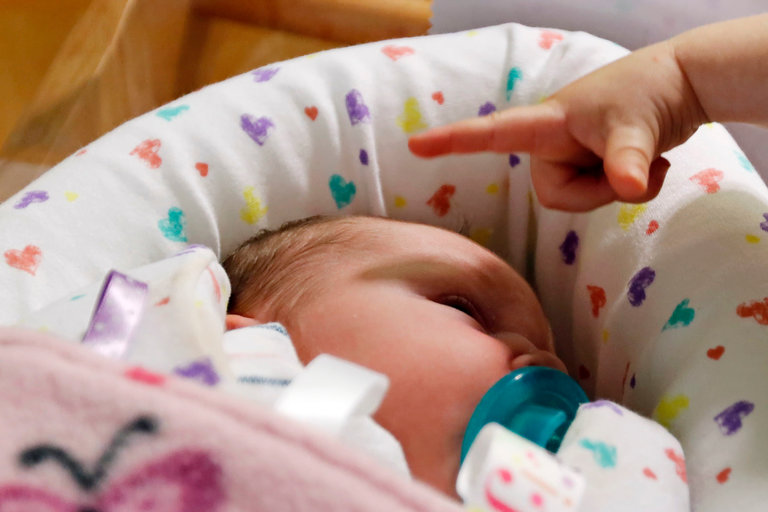 Two Massachusetts sisters, including one reaching into the crib, who were born dependent on methadone. Their mother is a recovering heroin addict.

The problem has grown more quickly than realized and shows no signs of abating, researchers reported on Monday. Their study, published in JAMA Pediatrics, concludes for the first time that the increase in drug-dependent newborns has been disproportionately larger in rural areas.

The rising rates are due largely to widening use of opioids among pregnant women, the researchers found.

“The problem is accelerating in rural areas to a greater degree than in urban areas,” said Dr. Veeral Tolia, a neonatologist who works at Baylor University Medical Center in Dallas and was not involved in the new report.

Other recent studies have underscored the breadth of the problem. The hospital costs associated with treating addicted newborns rose to $1.5 billion in 2013, from $732 million in 2009, according to a study in the Journal of Perinatology.

Some neonatal intensive care units, called NICUs, now devote 10 percent of their hours to caring for infants who have withdrawal symptoms.

Hospitals in the eye of this storm are commonly underresourced, experts said.

“Typically, rural hospitals that deliver babies have traditionally focused on the lower-risk population in areas they serve,” said Dr. Alison V. Holmes, an associate professor of pediatrics at Geisel School of Medicine at Dartmouth.

“But when you’re getting to a point of having a substantial proportion of mothers taking opioids and babies at risk for opioid withdrawal, it becomes a strain on the regional system.”

Using data from 2012 and 2013, a recent federal study found states like West Virginia, Maine and Vermont had particularly high rates of what is known as neonatal abstinence syndrome. It includes such symptoms as irritability, breathing problems, seizures and difficulties taking a bottle or being breast-fed.

In the 1970s, withdrawal symptoms affected mostly babies of heroin-addicted mothers in cities such as Philadelphia and New York, Dr. Tolia said. “What this study shows is this has totally flipped,” he added.

Babies may be born with symptoms of withdrawal from any number of drugs, including certain antidepressants or barbiturates, after prolonged use by their mothers during pregnancy. But the new report found that rates of infant drug dependency are rising in tandem with maternal opioid use in particular.

Doctors frequently prescribe opioids to mothers-to-be to treat back pain or abdominal pain. Nearly 42 percent of pregnant women in Utah on Medicaid were prescribed opioids, and roughly 35 percent in Idaho, a 2014 study found.

Maternal opioid use was nearly 70 percent higher in rural counties than urban ones, the new report found.

Last year, a study published in The New England Journal of Medicine found that neonatal intensive care units nationwide that used to spend less than 1 percent of their days caring for these infants now must devote 4 percent of their staff hours to the task.

Indeed, eight intensive care units reported spending more than 20 percent of their time caring for these vulnerable babies. The strain has prompted a debate about whether the NICU is the best place to treat these infants.

A study in Pediatrics found that allowing mother and child to stay together in the same hospital room reduces the amount of drugs babies need, and overall costs, too.

“Rooming is important for smaller, rural hospitals,” said Dr. Holmes, the first author on the Pediatrics study. “Then they know they can care for these babies without needing a neonatal care unit.”

Dr. Stephen Patrick, a neonatologist at Vanderbilt Children’s Hospital and an author on the JAMA Pediatrics study, finds the evidence on rooming-in convincing. In their intensive care unit, he said, “some of the babies we see are not in drug withdrawal. It’s mom withdrawal.”

The study found that rural infants and their mothers were more likely to be poorer and to rely on public insurance like Medicaid, but it did not address other factors behind the increase in babies born dependent on opioids.

Women who are already addicted “may not be getting the help they need before they get pregnant,” said Dr. Nicole Villapiano, a pediatrician at C. S. Mott Children’s Hospital at the University of Michigan and the lead author of the new study. They also might have trouble finding medical assistance to treat opioid addiction once pregnant, too, she suggested.

For many, the logistics can be difficult. Methadone, a drug commonly used in treatment programs, must be distributed at a clinic every day, which is “very challenging if you’re talking about a rural community where there isn’t much local health care,” Dr. Tolia said.

Pregnant women may also be treated with buprenorphine, available at certain pharmacies. In theory, Dr. Tolia said, it could be more easily distributed to rural areas.

“Our solutions need to be focused on where the disease is happening in communities,” he said. Once a baby arrives in a neonatal intensive care unit, “it’s too late.”

In July, President Obama signed into law the Comprehensive Addiction and Recovery Act, or CARA. It stipulated that federal officials should give priority to funding programs in rural areas to improve treatment for pregnant women.

“It’s the first time to my knowledge that that population has been recognized as being underserved, and was targeted specifically, and I think it’s real progress,” said Mark Dunn, the director of public policy for the National Association of Addiction Treatment Providers.

Shame is another reason pregnant women shy away from getting help.

“It affects their ability to come forward for treatment,” said Dr. Anne Johnston, an associate professor of pediatrics at the University of Vermont, whose program aims to be nonjudgmental in order to “bring people out of the woodwork.”

Several experts said that focusing on the babies alone is shortsighted: To stem the rise in infant addiction, they noted, it is critical to treat the mothers’ opioid abuse.

“One has to appreciate that behind every incidence of neonatal abstinence syndrome, which is relatively easy to recognize and relatively easy to treat,” Dr. Johnston said, “there’s a case of a mother dependent on opioids, and that’s complex to treat.”