Rivian doesn’t want to build just another electric vehicle. It’s not aiming to be a Tesla killer either. No, this 10-year-old company that kept a low profile until November when it unveiled an electric pickup truck and SUV, is aiming to be an adventure brand.

Or, as Rivian founder and CEO RJ Scrainge told TechCrunch recently, the company’s technology and products are all meant to “enable people to adventurous, whether it’s carrying their kids or their pets or their gear.”

The world got a glimpse of what Rivian might have in mind earlier this year at the Overland Expo in Flagstaff, Arizona, when the company showed off prototype of a camp kitchen that pulls out of the electric pickup’s gear tunnel.

TechCrunch got an up close and yeah let’s tinker around with it kind of look at the camp kitchen. We discovered a thoughtful product that Scaringe has confirmed will be available when the electric pickup truck comes to market. Here’s the Rivian camp kitchen in action. 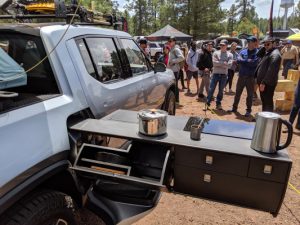