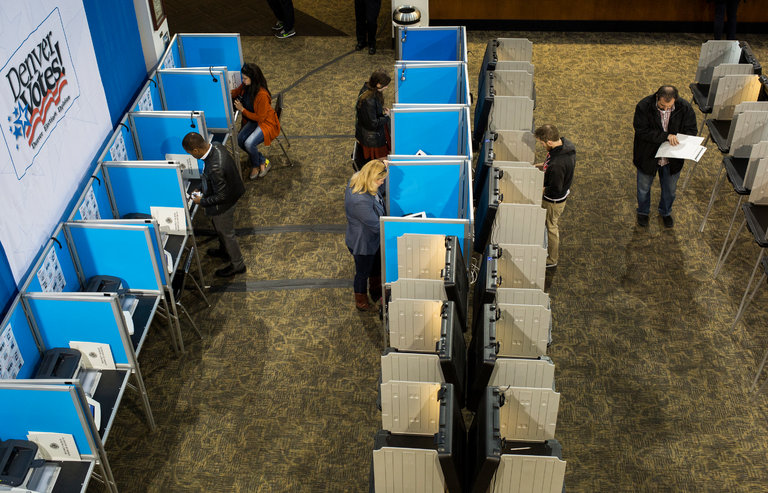 Voters at booths in Denver on Tuesday.

For election fanatics obsessively watching the race on Tuesday, a new Silicon Valley-backed start-up called VoteCastr offered a tantalizing promise: real-time voter turnout data that could predict, throughout the day, how many votes the candidates got in seven closely contested states.

In an unprecedented experiment, VoteCastr teamed up with Slate and Vice News to publish projections hours before the polls closed, breaking with a longstanding journalistic tradition of waiting until final votes are cast in each state before reporting the results.

Their methodology involves using a team of observers in dozens of precincts in the seven swing states to assess turnout for likely voters for Donald J. Trump and Hillary Clinton, whom they have identified using surveys. The states being watched by VoteCastr were Florida, Iowa, New Hampshire, Nevada, Ohio, Pennsylvania and Wisconsin.

Some political analysts were skeptical of VoteCastr’s efforts from the start, and warned that it could depress voter turnout in close states. (Writing in The Hill, the analyst Mark Plotkin called it irresponsible and “downright scary and disruptive.”)

The venture was an enormous gamble for Slate, which rolled out the partnership with much fanfare. In a post explaining why it was partnering with VoteCastr, Julia Turner, Slate’s editor in chief, noted that the start-up is staffed by data experts who worked on campaigns for Barack Obama and George W. Bush. (Its chief strategist, Sasha Issenberg, is a former columnist for Slate and wrote a book about how data has transformed political campaigns.)

VoteCastr got off to a rocky start. First, there was an unexpected delay when its data team faced technical glitches and was unable to update the site early in the day as promised.

It got worse as the day went on. At 11:57 a.m., VoteCastr posted on Twitter that its Nevada projections were off because they had erroneously included the Green Party candidate Jill Stein — who was not on the state ballot — in its survey. Then, shortly after 3 p.m., Slate posted an update saying that the state maps were inaccurate, because they represented only Election Day turnout data, and not early vote estimates. The maps were removed and later updated.

The hiccups were met with scorn and prompted outraged calls for VoteCastr to suspend its experiment until the polls closed, to avoid the risk of publishing misleading information that could affect turnout.

“So the @votecastr maps have been wrong all day. Oh great,” Evan Smith, chief executive of The Texas Tribune, wrote on Twitter.

“Either this VoteCastr methodology is trash or else the else the election is already over,” Matthew Yglesias, a reporter for Vox, said in a Twitter post at 2:17 p.m., adding, “I think it’s probably the former.”

It’s too early to say whether VoteCastr’s projections might have had an impact on actual turnout, and many political analysts are dubious of the claim that calling a state early discourages likely voters from going to the polls in Western states.

But there is evidence that the company’s experiment may have had concrete consequences, moving the markets as Wall Street traders watched the data. According to an article in The Wall Street Journal, stock prices rose and bonds fell as the market responded to early projections that looked favorable to Mrs. Clinton. Traders were paying particularly close attention to VoteCastr’s data on Tuesday, NatAlliance Securities’ Andy Brenner told The Journal.