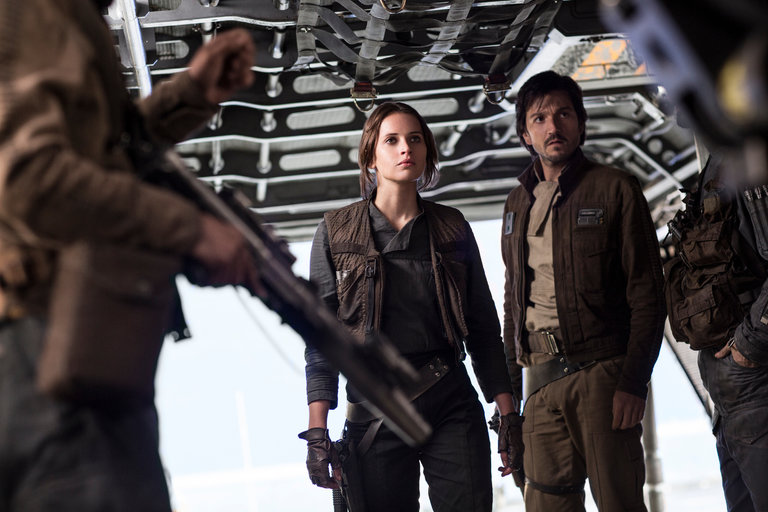 Felicity Jones and Diego Luna in “Rogue One: A Star Wars Story.”

Does Darth Vader have a cameo or a more substantial role? Is Jyn Erso a heroine for the ages? How are the new droids — and the music without John Williams? “Rogue One,” the first “Star Wars” stand-alone movie, will begin storming multiplexes on Thursday night, and those questions will finally be answered. The Times chief film critic A.O. Scott has weighed in with his review here. And below — without giving too much away — our senior editor for movies, Mekado Murphy, offers some key takeaways after finally laying eyes on the film.

While he’s not quite C-3PO, the reprogrammed Imperial security droid with the “Iron Giant” eyes is a cute, fun addition to the “Star Wars” universe — and he’s an essential part of the Rebel mission. Alan Tudyk, as the voice of K-2SO, imbues the character with emotion and brings a light touch to the personality.

The movie, which takes place just before the first “Star Wars” film that introduced Luke Skywalker, is about a band of rebels on a high-stakes mission: to obtain the plans for the original Death Star. Fans will see every bit of the peril involved. The film has some combat moments that rival those in much more brutal war movies, yet this film’s approach to violence still fits well within the PG-13 realm.

Yes, Felicity Jones does fine work as Jyn Erso. And Ben Mendelsohn makes for a slyly sinister villain as Director Krennic. But it is Mr. Yen as a blind rebel who wows in some of the film’s most kinetic fight scenes. The martial arts-style choreography adds a fresh dynamic to the movie.

The scenes on the planet Scarif are astonishing.

The palm trees! The sun! The shoretroopers! Scarif is a gorgeous oasis and an eye-popping new set piece in the “Star Wars” world. But the battles between the Imperial Army and the Rebel Alliance turn its tropical setting into a full-scale war zone. It’s beautiful and heart-pounding, with giant AT-ACT walkers coming right at you.

Tinges of John Williams’s themes can be heard in Michael Giacchino’s “Rogue One” score. But this new composer in the franchise manages to craft something fresh, taking us through the adventurous highs and the serious lows of the narrative. It feels empathetic during some of the movie’s emotional moments, while determined at the peak of its action.

Thankfully, James Earl Jones is back to voice the Sith Lord. Unfortunately, you won’t hear much of that voice. What there is of Vader in this movie is limited, though his scenes pack a wallop.

Jyn Erso is not as dynamic as Rey.

While Jyn’s character sets many of the events of “Rogue One” in motion, and she does have exciting scenes, the movie doesn’t allow her to break out in quite the way that the previous “Star Wars” movie, “The Force Awakens,” did with Rey. “Rogue One” is much more eager to shift the spotlight to other characters in the ensemble and give them more interesting things to do.

Even if you aren’t a “Star Wars” obsessive who knows all the details of the galaxy far, far away, chances are you won’t be lost in this narrative. “Rogue One” is fully separate from the “Star Wars” saga — it doesn’t require knowing every branch of the Skywalker family tree — yet also manages to feel very “Star Wars.”