Their effort has met with considerable success, dimming the prospects for renewable energy across the United States. 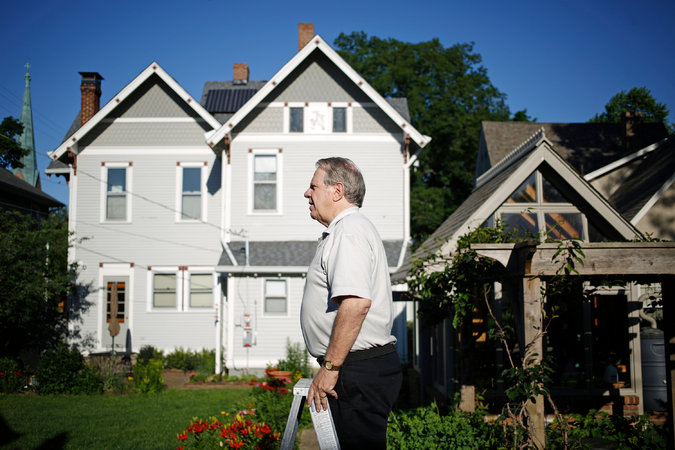 Uncertainty over net metering in Indiana has “shut us down,” said Michael A. Mullett, a volunteer who has helped two dozen households sign up for solar panels since 2014.

Prodded in part by the utilities’ campaign, nearly every state in the country is engaged in a review of its solar energy policies. Since 2013, Hawaii, Nevada, Arizona, Maine and Indiana have decided to phase out net metering, crippling programs that spurred explosive growth in the rooftop solar market. (Nevada recently reversed its decision.)

Many more states are considering new or higher fees on solar customers.

“We believe it is important to balance the needs of all customers,” Jeffrey Ostermayer of the Edison Electric Institute, the most prominent utility lobbying group, said in a statement.

The same group of investor-owned utilities is now poised to sway solar policy at the federal level. Brian McCormack, a former top executive at the Edison institute, is Energy Secretary Rick Perry’s chief of staff. The Energy Department did not make Mr. McCormack available for an interview.

In April, Mr. Perry ordered an examination of how renewable energy may be hurting conventional sources like coal, oil and natural gas, a study that environmentalists worry could upend federal policies that have fostered the rapid spread of solar and wind power.

Charged with spearheading the study, due this summer, is Mr. McCormack.

“There’s no doubt these utilities are out to kill rooftop solar, and they’re succeeding,” said David Pomerantz, executive director of the Energy and Policy Institute, a renewable energy advocacy group. “They’re now driving the agenda.”

Early on a March morning in the Indiana State Capitol, under a mural of the Greek sun god Apollo, solar energy enthusiasts swarmed a committee hearing to defend the state’s embattled solar policy.

A school superintendent said that his underfunded district needed solar power to reduce energy costs. A local farmer pleaded that his pine tree nursery depended on power from his solar panels. A Baptist pastor said he saw drawing energy from the sun as an “expression of our love of God’s creation.”

The coalition was fighting a losing battle.

A week before the Indiana committee hearing, a group of utility lobbyists descended on the statehouse, handing out talking points that said credits for rooftop solar panels lead to higher rates for everyone else. They were there to support a bill, sponsored by Senator Brandt Hershman, that would roll back Indiana’s net metering system by reducing the rate utilities paid to solar consumers for their excess electricity.

Homeowners with solar panels “avoid paying for use of the grid, even though they use it almost constantly to buy or sell electricity,” read a talking point prepared by Indiana’s local investor-led utilities group, the Indiana Energy Association, and circulated among Republican state legislators.

Indiana’s five investor-owned utilities are among the biggest contributors to Indiana’s elected officials, together giving at least $3 million to mostly Republican candidates over the past four election cycles, according to campaign finance filings. They are also known to play an outsize role in drafting energy-related bills.

Mr. Hershman said utility contributions had not swayed him against net metering. He said his bill, which was passed and signed into law this spring, protects current solar customers by locking in their rates for many years.

“I receive donations from a wide variety of groups across the ideological spectrum because I tackle tough issues fairly, listen to both sides and promote good policy,” he said by email.

The pushback against renewable energy has been years in the making.

Four years ago, the Edison institute, an industry group made up of the country’s largest investor-owned electric companies, declared that the business of generating electricity was in danger of being sucked into what has since become known as a “utility death spiral.”

As more consumers switched to rooftop solar and bought less electricity from the grid, the trade group worried in a 2013 document, the costs of running conventional coal, oil, gas or nuclear power plants would be shared among an ever-smaller customer base. That could cause rates to spike, chasing even more customers away.

The prospect of more customers “fully exiting from the grid,” the group said, “raises the potential for irreparable damages to revenues and growth.”

Since then, the utilities have targeted state solar power incentives, particularly net metering, which credits solar customers for the electricity they generate but do not use and send back to the grid. That offsets the cost of electricity they may still buy from their local utility during cloudy days and at night, reducing or even eliminating their electricity bills.

Utilities argue that net metering, in place in over 40 states, turns many homeowners into free riders on the grid, giving them an unfair advantage over customers who do not want or cannot afford solar panels. The utilities say that means fewer ratepayers cover the huge costs of traditional power generation.

A study released this year by the federal Lawrence Berkeley National Laboratory, however, concluded that for the vast majority of states and utilities, the effects of rooftop solar credits on electricity rates for nonsolar customers would be negligible for the foreseeable future. The Edison institute disputes that study’s findings.

To fashion a legislative response, utilities turned to the American Legislative Exchange Council, or ALEC, a conservative nonprofit that receives funding from the billionaire brothers Charles G. and David H. Koch.

In 2014, ALEC adopted model legislation to move away from net metering, which was then circulated among ALEC’s network of state legislators. Mr. McCormack, then the Edison institute’s vice president for political and external affairs, played a role in writing the model legislation.

Utilities found a receptive audience in many states.

Arizona legislators voted in December to move away from net metering, lowering the credit solar customers receive for the excess energy they generate and limiting how long customers keep their favorable rates.

In Florida last year, the utility industry contributed more than $21 million to an ultimately unsuccessful ballot initiative to ban third-party sales or leasing of rooftop solar panels. A leaked audio recording appeared to reveal that the utility campaign deliberately misled pro-solar voters into voting for an anti-solar policy, a tactic one consultant called “political jujitsu.”

The latest utility resistance to residential solar in places like Indiana is striking because those states do not yet have big rooftop solar markets, said Autumn Proudlove, an analyst at the N.C. Clean Energy Technology Center at North Carolina State University. Only about 1,100 of Indiana’s 2.5 million rate-paying households have signed up for net metering.

Driven by sharply falling costs, the United States last year added a record 15 gigawatts of solar capacity, enough to power around 2.8 million homes and more than any other source, including natural gas and coal. The bulk of that growth came from giant solar parks and other large projects run by solar producers and, in some cases, the utilities themselves. Large-scale wind projects have also grown rapidly, many in states carried by Donald J. Trump in the presidential election.

Uncertainty over net metering in Indiana has slowed the market further. “It’s totally shut us down,” said Michael A. Mullett, a volunteer at Indiana’s Columbus Community Solar Initiative, who has helped two dozen households sign up for solar panels since 2014.

Still, at a January 2016 board meeting of the Edison institute, attended by chief executives of the country’s largest utilities, Thomas R. Kuhn, the group’s president, counseled against complacency.

“Years, ago, I think a lot of people said, ‘That’s not going to come to our area,’” he said, according to a recording of his remarks made available by a participant. “And now we see it in each and every state,” he said.